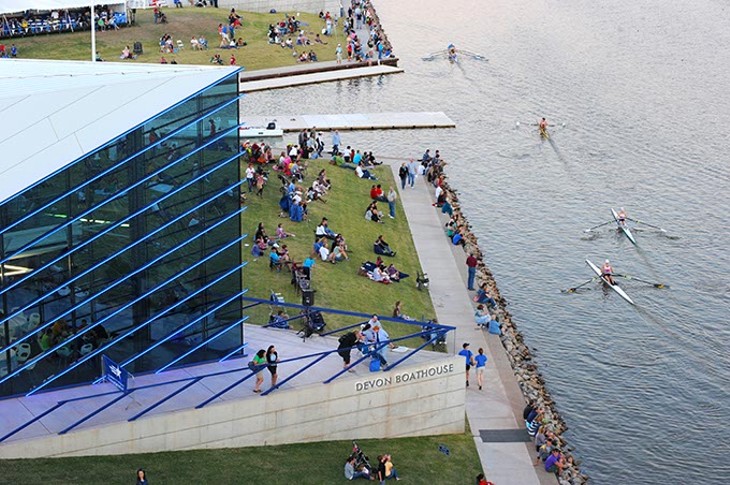 The festival will kick off on Thursday and Friday night with the OG&E NightSprints, where local rowing teams take to the river to see who is the fastest, followed by a riverfront fireworks display.

“That’s when our Riversport corporate rowing league and Riversport dragon boat league will race,” OKCBF Public Relations Director Sherry Burnett said. “You’re looking at over 60 teams of people from Oklahoma companies who come and take part in a 12-week season that culminates in the OG&E NightSprints.”

According to Burnett, the Oklahoma River’s facilities and infrastructure are uniquely geared toward night racing.

“The athletes are racing under stadium lighting, so the whole river is illuminated,” Burnett said. “The distance is approximately 500 meters for rowing and 200 meters for dragon boat racing, so the crowd will see the whole race from start to finish.

The NightSprints course is the only permanently lit rowing racecourse in the world, according to the OKCBF.

The regatta continues into the weekend with the OCU Head of the Oklahoma Regatta, a two-day event that overlaps with the OG&E NightSprints and brings in athletes from all over the world at the junior, collegiate and master levels.

“[The main event of] the Head of the Oklahoma is essentially a distance race,” Burnett said. “It is a two-and- a-half-mile race up the Oklahoma River. A lot like a marathon, there are staggered starts and you see crews passing one another, so you don’t get the same sprint-racing feel you get with the NightSprints.”

Burnett said that teams from all over the United States, including the University of Southern California and Harvard rowing teams, will be participating in the event.

The annual Blu Lounge fundraising party, where Team OKC members of the National High Performance Center will meet and greet partygoers, will also take place during the event.

The regatta and surrounding events all celebrate the sport of rowing as it relates to Oklahoma City culture. They also commemorate the two decades of work the city has invested into the river through programs like MAPS.

“The way it started out, back in the 1990s, was that city leaders realized that they needed quality-of-life amenities here in order to attract and retain businesses,” Burnett said. “That grew into the original MAPS program, and one of the first MAPS projects was to put water back in the Oklahoma River.”

This project — at least as it pertained to rowing — benefitted from a previous public works project from around the Great Depression.

“Back in the 1920s and 1930s, the then-North Canadian River was constantly flooding downtown,” Burnett said. “So the Army Corps of Engineers came in, realigned the river enough that it wouldn’t flood the core of downtown and essentially created a drainage ditch, which is how it was used for years. When they did that, by some stroke of luck, they created a perfectly straight 2000-meter race course, which is the Olympic distance for rowing.” 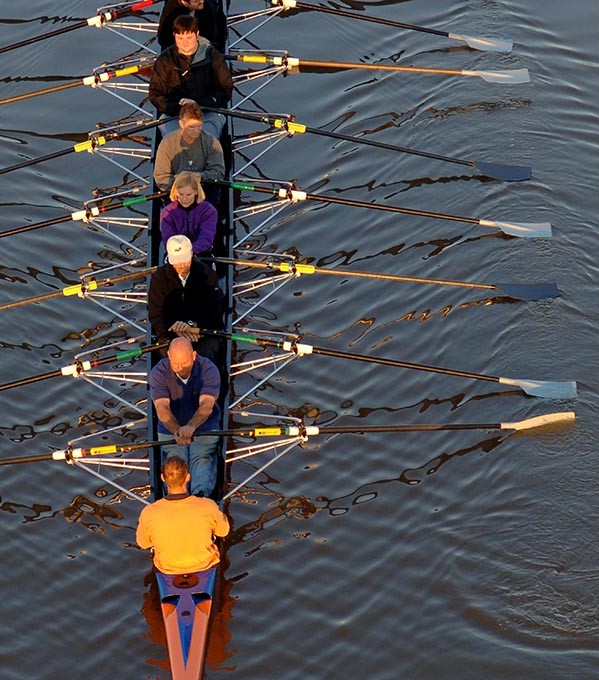 When MAPS revitalized the river, Burnett said it inspired OKCBF director and the first-ever rowing coach at OCU, Mike Knopp, to start planning the boathouse and transform the Boathouse District into a full outdoors-oriented area.

“With all the activity we have here at the Boathouse District, you have the opportunity to get on the water, hop on a bike or a long board or go for a jog on the river trail,” Burnett said. “There are so many opportunities to get active and enjoy being active here.”

Festival admission is free, and some free parking will be available. Tickets to the Blu Lounge party are $50, and all proceeds from the party and festival go to the High Performance Center.

“The 2016 Olympic Games are coming up soon, and we have several athletes here that are vying for spots on the national rowing team, so we really just want to do the best we can to support them,” Burnett said.