11 artists on display at Christmas at the Elms 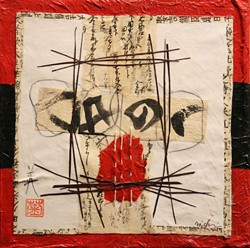 Dozens of framed and unframed works on paper from 11 artists will be on display and for purchase during the month of December at a Paseo Arts District gallery.

Christmas at The Elms is an annual show at JRB Art at The Elms, a gallery that represents between 60 and 70 artists from Oklahoma City, surrounding cities and neighboring states.

Gallery organizers simply selected a round of artists from its large repertoire to display small works that would make nice gifts for the holiday season, said gallery coordinator Carolyn Stuart.

Unlike past Christmas exhibitions, Stuart said the prominence of works on paper in this year’s show comes from the gallery’s abundance of prints in its “flat files” or archives as well as the common medium of artists on display this year, including Oklahoma artist Denise Duong.

Duong, who has been represented at JRB Art since 2006, had a joint show with Timothy Chapman at the gallery in November, and two of her prints from that exhibition will be on display again at the Christmas show.

“The prints for the show are images of paintings from my last show, which was based on nature, travel and the subconscious,” she said.

Duong said she has maintained and developed this current aesthetic for about a decade, when her style truly came together.

“I’m a curious person and love spontaneity and adventure,” she said. “I feel like my paintings give you a sense of that and you can come up with your own narrative to the pieces.”

Duong considers herself lucky to have just had her show in November because she didn’t have to prepare as much for this final show of the year.

“I was trying something new out, so I just happened to get lucky and coincidentally had pieces for the show,” she said.

For Ellen Moershel, a Norman native, Christmas at The Elms in 2013 was her first time to show at JRB Art, a gallery she frequented before becoming an exhibiting artist. She recently completed a series of medium-sized abstract paper paintings that emulate fractures, such as broken glass and topography.

“When I work on paper, I always use gouache, pin, ink and gold leaf,” she said. “I used lots of hard, straight lines and sharp angles. I was ready to minimalize the soft, organic shapes I typically paint.”

Moershel said she enjoys participating in the group show because it’s an opportunity for her to meet the many artists JRB Art represents, most of whom she doesn’t know.

One of those artists includes Greg Gummersall, a Durango, Colorado artist, who began his career 35 years ago on the West Coast and his partnership with JRB Art back in 2009.

Gummersall said works on paper challenge and encourage him to draw on “the beautiful paper,” a medium that uses much smaller dimensions than his typical painting canvas.

“It is great to be challenged to [begin] on a blank piece of paper and work through somewhat wild/chaotic and controlled marks and paint,” he said. “The art always guides me through many edits that [end] in a painting that is spiritually alive yet interesting in a serene sort of way.” 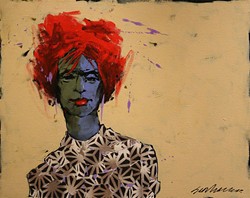 Gummersall hopes Christmas at The Elms will expose his art to new admirers and collectors who will see “something new in the painting every day” and share it with others.

Carolyn Stuart said exposure for the gallery’s array of artists and gift options for visitors during the month of December is the goal of the annual end-of-the-year show.

Print headline: Paper noel, Paper art by 11 artists will be on display through December at JRB Art at the Elms.

JRB Art at The Elms