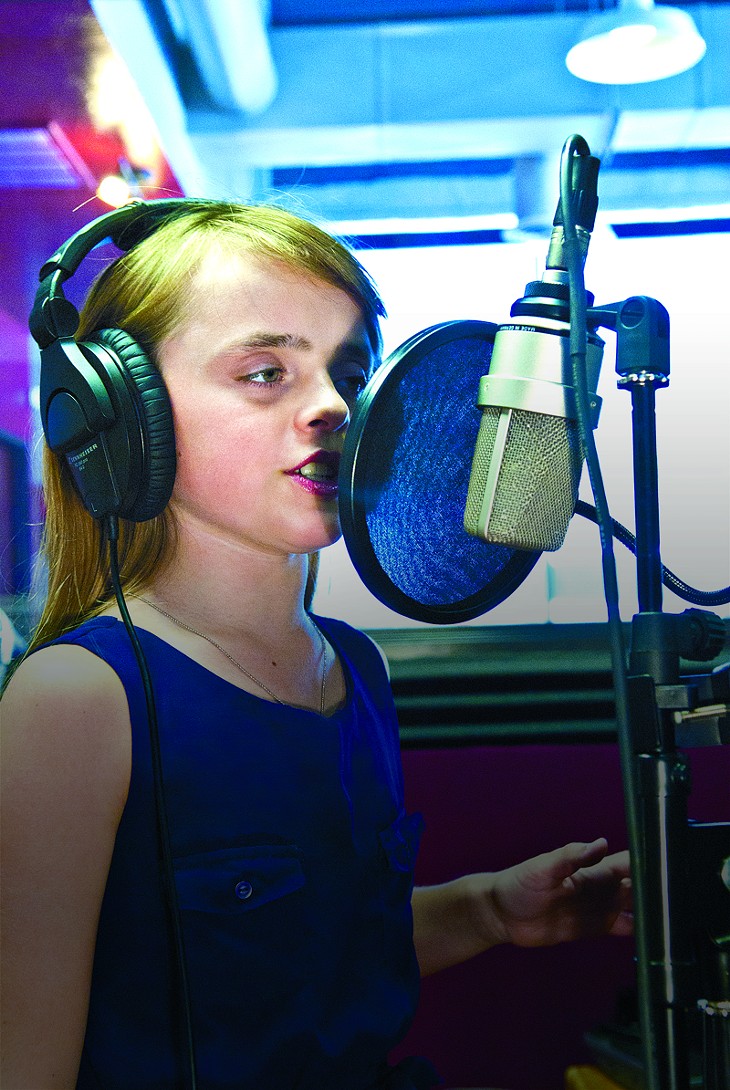 As far as songs go, few prove as challenging to sing as our national anthem.

It’s a technically demanding tune from first note to last, to be sure, beginning with a low bellow that quickly soars toward star-punching high notes, eventually swelling to a show-stopping crescendo that even the most seasoned performer can have trouble mastering.

It’s more than perfecting its pure musical gymnastics that dictates its difficulty, the absolute attention of tens of thousands of sports fans directly on the singer and the singer alone. Even music icons like Christina Aguilera, Michael Bolton and James Taylor have flubbed the lyrics or missed a note.

Standing at just over four feet at center court of Chesapeake Arena before Game 2 of the Thunder-Grizzlies playoff series in April, 10-year-old Edmond singer Olivia Kay nailed every note and word of the national anthem to audible awe from the sellout crowd. She had to finish out the song over a continuous roar of approval from the 18,203 fans in attendance.

She did so with a smile on her face, never breaking even a single bead of sweat as her soulful voice, boomingbeyond-her-years, ran through each line with confident ease. Thunder power forward Serge Ibaka — approaching at what feels like three times Olivia’s size — ran to give her a high five of approval.

“It doesn’t bother me,” Olivia said. “I’m more nervous in smaller crowds than big crowds. It’s funny; for most people, it’s the other way around.”

She was invited back for Game 4 of the Thunder’s match-up with the San Antonio Spurs. Afterward, she sang Adele’s “Rolling in the Deep” for the Inside the NBA crew, met with spirited applause from Charles Barkley while Shaquille O’Neal and Kenny Smith jostled for position to get her to sign a recording contract.

It’s all in good fun, of course, but it feels like a preview of what’s waiting for Olivia around the bend, probably sooner rather than later: a future star signing her dreams into reality.

That voice has always been there, at least as Olivia and her mother, Heather Kay, would tell you. It’s raw and unmolded, yes, but those big notes weren’t a sudden development. She wasn’t born into a musical family, yet that gene manifested itself anyway.

At just 7 years old, Heather booked some singing lessons to a coach that took some convincing.

“She didn’t exactly want me,” Olivia said of her coach. “She didn’t do 7-year-olds, but she let me audition. I sang ‘Firework’ (by Katy Perry) and ‘Baby’ (by Justin Bieber), and she was like, ‘OK. You’re in.’” And that’s how things went for the next three years. They eventually uploaded a video of Katy Perry’s “Roar” to Next Star Now, a music discovery site assisting aspiring singers and musicians in connecting with label executives, producers and managers from across the country. CEO Rick Garrison was so impressed with Olivia that he invited her and Heather to meet at the Guthrie Escape Art, Wine & Music Festival this past October.

It took just a few notes in person to convince Garrison to hop on board to manage Olivia’s career. The first move was a professionally filmed take of Olivia’s rendition of “Rolling in the Deep,” shot at the fire ring at Deep Deuce Grill in the heart of Oklahoma City and just down the road from the Next Star Studio Garrison was constructing in Automobile Alley.

The video was uploaded just before Thanksgiving.

“I remember we put it on and it got a couple of thousand views and we’re all excited,” Garrison said. “Next thing you know, it’s ten thousand. Then it was 50. And then a hundred thousand.”

Rolling in the views

The video went viral — in a big way.

As the views soared, so did the calls from local and national television producers. Soon, she was all over local news. And then she was on The View being interviewed by Barbara Walters. And then onThe Ellen Show blog.

“Every time it slowed down, there was something to kick it back into gear,” Garrison said. “That’s the speed we want to go, though, nice and steady. We don’t want to do anything crazy at 11 years old.”

It was after that appearance on The View that the Thunder picked up the phone and invited her to sing “The Star- Spangled Banner.” Olivia has kept as busy as she wants with shows not only across Oklahoma but over in Nashville and Memphis for auditions and public performances.

But Olivia isn’t being dragged from concert to concert.

“We’re not pushing her along to do anything,” Garrison said.

“I wouldn’t let them,” Olivia quickly snapped back, smiling.

Olivia bounces around the new and polished Next Star Studio like it’s a playground, and in Olivia’s world, it is. The swanked-out, state-of-the-art digital studio has been a home away from home for her and other young aspiring artists like her since it opened its doors in May.

She works hard but plays hard there, too. When she’s not working with producer/engineer Ben Edison and vocal instructor Allyson Bold, she’s texting them jokes and goofing around on the drums on the studio’s compact stage or lounging on the bright-red leather couch in the lobby.

Olivia and the team there recorded a cover of Frozen’s ubiquitous anthem “Let It Go” this spring and just wrapped up finishing her first original song “Believe” — co-written by Edison and Bold — this summer.

Olivia has dreams that are as big as her voice and worthy of the message she often celebrates with her song choices. She dreams of being on the Disney Channel just like every kid her age, only she has the chops that make it more likely than a wish upon a star. Olivia is mature enough to realize it but approaches her nights of recording, self-taught piano lessons and songwriting sessions with as much childlike enthusiasm as dedication.

The break from school is booked for a steady slate of shows and recording, but her childhood isn’t getting lost in the process. She’s enjoying a summer of swimming with friends, fun trips across the country and playing around the house with her older sister and twin brother.

“She’s a kid, all day every day,” Heather said of Olivia’s workload, which isn’t as heavy as Internet commentators might assume, with plenty of skip days and only the occasional missed day at school. In fact, she just celebrated her 11th birthday with a humble, fun little party not unlike the rest of her friends and classmates.

But as much as has happened in the past 12 months, it seems likely that the next dozen will offer even that much more. Who knows where she’ll be when she’s blowing out the candles at her big 1-2?