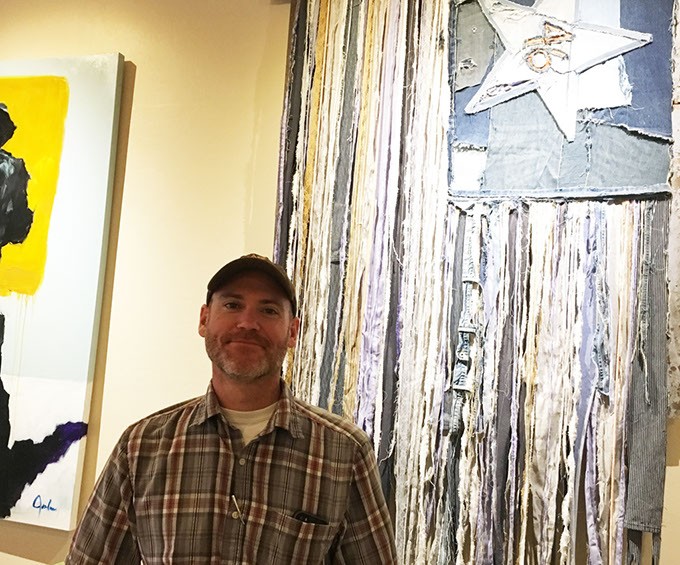 The mural above 116 Farmstead Market & Table depicts the history of the town of Luther from its founding as a farming community nine years after the land run of 1889 to entering the now-bygone modern era with steel beams and a resident holding the local newspaper, The Luther Register.

The bustling life of Luther, much like many smaller communities after the end of World War II, very much began to dwindle as population trends sent people closer to city life.

The newspaper shuttered its doors in the 1950s, and many of the downtown businesses followed suit. Thanks to a new exit off the Turner Turnpike, one-time city residents are making their way out to eastern Oklahoma County and spearheading a revival in downtown Luther.

Matthew Winton and his wife Jennifer decided to leave the suburbs of Edmond behind for more rural life outside Luther more than a decade ago. Not only did the Wintons make the transition to the country; they also decided to become first-generation cattle farmers.

Raised in Fort Worth, Winton grew up visiting his grandfather in the country. After reading agricultural philosophy writers like Wendell Berry and Wes Jackson, he and his wife came to the conclusion after the birth of their first child that “there is something to raising your children ‘in the dirt.’”

“We drove down to Luther on a whim,” Winton said. “ We came through downtown and were amazed that there were old buildings but nothing going on.”

The Wintons raised their first herd of cattle 10 years ago with All Hat Cattle Co., a play on the joke that some cowboys are “all hat” — just for show. Winton went to law school at the University of Oklahoma and works as a real estate lawyer, still retaining an office in Edmond.

Winton wanted to give back to Luther, the town that helped realize his dream of becoming a cattle rancher and where he and his wife raise their four children. He negotiated to buy a space downtown from the town without the idea of opening a restaurant.

“Talking to people around town, they resented having to leave for goods and services,” Winton said. “We didn’t open this place for financial reasons. There are some decisions you make, like going into ranching or opening a business in Luther, that aren’t for economic reasons. This is a heart commitment to the community.” 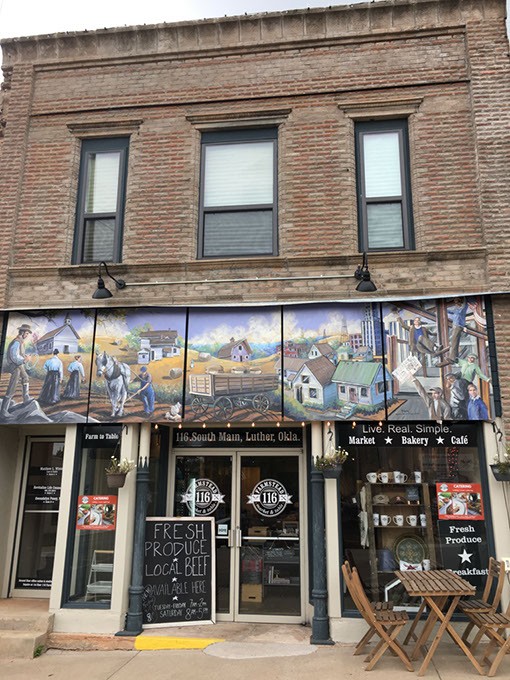 116 Farmstead opened in May 2016 and serves as a communal place for residents and visitors to dine at the large, shared dining table, but also to buy local Oklahoma products, like beef from Winton’s ranch or other goods such as Oklahoma-made mustard and honey. The artwork of local artists hangs for sale on the walls.

“The beef that’s in that freezer, I tagged that calf within 24 hours after it was born,” Winton said. “I watched it grow; it ate from my hand and came to my voice. I took it to the butcher to be killed. This is as close to ‘know your farmer’ as it gets.”

Luther native Amy Clowers runs the kitchen, which has daily breakfast and lunch specials of a Southwestern and Southern vibe, like a Soul Sandwich with local ham, collards and mac and cheese.

Fixed menu items include quiche, breakfast burritos, sandwiches, salads and a bevy of bakery options like whole pies and a French toast casserole that serves 10-12 people.

Winton is the first to admit that opening a restaurant isn’t a move to make money. 116 Farmstead is one of three operating businesses in downtown Luther.

“You see towns where there has been a flattening of the economy; something sparks interest, and you see other people who are on the fence — ‘Maybe we can do this too.’ The idea is to have a nice restaurant, but that it will spark others to come in and pretty-up downtown.”

Dawn Shelton moved from Oklahoma City’s Gatewood community out to Luther a few years ago, and she works at 116 Farmstead but also resurrected The Luther Register in a digital format.

Shelton felt compelled to keep up with board meetings and other needs for the good of the community, relying on more than two decades of experience in journalism. She spends hours live-streaming trustee meetings while selling advertising for the site.

“It’s been a great journey to leave the urban backyard for lots of land,” Shelton said. “It’s been great for my family. I decided to start the Register as an homage to the original and because no one else was going to do it.”

Winton said he has seen a change among the town’s board of trustees that is more focused on economic development.

“Under the prior leadership, they would’ve wanted the town to look as it did,” he said. “You have to help change the perception of Luther. There are people that have lived in Oklahoma County their whole life and don’t even know we’re here. It kills me and it thrills me at the same time.”

At the town’s Pecan Festival held on Main Street on Nov. 18, Shelton is organizing an effort to create the world’s largest praline to be certified by the Guinness Book of World Records. It’s another step in trying to pull the town of Luther together, one that started around the long communal table at 116 Farmstead.

“Everyone in Luther knows each other, but they still want their space. People will go to the outside tables and then slowly fill in the large table,” Winton said. “On Saturday, people reluctantly have to sit close to each other, but by the end of the meal, they’re talking over each other and sharing conversations.”

Correction: An earlier version of the story stated that Shelton wasn't a journalist by training.