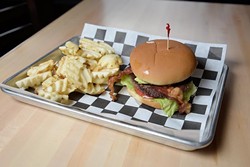 While bison, Scissor-tailed Flycatchers and lightning bolts have become de rigeur symbols of our home, it’s a little odd that 1907 doesn’t get more love. That is the year Oklahoma became America’s 46th state.

The sports bar isn’t focused on serving pioneer cuisine (though that’s not a terrible idea for a restaurant concept), but it does pay homage to the state’s athletic and cultural history with a variety of tasty burgers.

Nestled on the eastern corner of a shopping center, 1907 Burgers & Brews is perfectly lit for watching sports. Many shaded windows allow in plenty of light to read the menu, yet quell glare on the multiple screens that adorn the walls and sit above the bar.

The noise level is low enough to allow for conversation and folks who are more interested in a social lunch or a laid-back date than watching college football.

Those visiting 1907 to drink and snack should look at the restaurant’s selection of tasty waffle fries, which are golden-crisp on the outside and rich potato inside. That is the platonic ideal of french fries — a flavorful crust with enough strength to survive a trip through some ketchup and a mashed potato-like fluffy burst of savory tuber after each bite.

Truffle fries ($4.49) were the best of the bunch. Waffle fries are perfect for this preparation with all kinds of nooks and crannies in which toppings can hide, imbuing bites with more flavor.

Truffle fries are tossed in truffle oil and liberally decorated with salty, nutty Parmesan cheese. The heat from the freshly fried potatoes helps soak up oil and cheese, making each fry into a bite-sized flavor powerhouse.

Onion rings ($4.99) offer the hard-to-beat contrast of crispy sweetness of batter-fried crust against the snap and sting of onion. However, check the salt level before getting too deep into these — seasoning varies a bit at 1907, and a little salt can go a long way to making the rings taste their best.

A big plus of dining at a locally owned restaurant like 1907 is that its servers and cooks have more leeway to customize meals. Burgers that come with a side can be upgraded to any type of fries or onion rings for a modest upcharge.

So far, my favorite sandwich on the menu is The Aikman Bacon Avocado Burger ($8.99, including a side). Named for Henryetta High School’s favorite son, former Dallas Cowboys star quarterback Troy Aikman, the burger is pretty self-explanatory with strips of well-cooked bacon and slices of ripe avocado along with the standard lettuce and tomato.

This is another case in which checking the seasoning can make a difference. Either let the server know if your preference is salting before it’s grilled or do it to taste at the table.

For something a touch more heart healthy, Buffalo Nickel Burger ($8.99, including a side) replaces the usual beef patty with bison meat and tops it with lettuce, tomato, pickles and mayo. 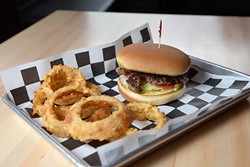 Servers at 1907 don’t ask how done customers would like their hamburgers, but the menu does make a note about “raw or undercooked meats,” which means diners can ask for items to be cooked medium or medium-rare. That is a good idea with a bison patty, which any of the other burgers can be switched to for $2 more. Bison is leaner than beef, and cooking it to medium-well can end with a sandwich that is too dry for my tastes.

Chicken tenders ($6.99, including a side) are delightfully golden and crisp on the outside and unbelievably juicy on the inside. Even warmed up a little later in the evening — like you’ve never had the munchies — they were quite moist.

Those who like fish tacos ($7.99, including chips and salsa) fried instead of grilled will find plenty to love about this Sriracha sauce-covered tilapia dish, but it seemed too heavy for what is often considered a lighter option. Your mileage might vary, but the chicken and burgers are preferable options.

The dish names, evoking famed OU coach Barry Switzer, folk icon Woody Guthrie and actors James Garner and Brad Pitt, might not matter to some, but I found 1907’s menu, food and staff charming. Next time someone needs an out-of-the-way spot to watch a Thunder game and grab a burger, this local sports bar ought to be on the list of destinations.

Print headline: Founding foods, Oklahoma-focused 1907 Burgers & Brews is a sports bar and restaurant with love for the Sooner State.

What works: The laid-back atmosphere and Oklahoma-centric menu.

What needs work: Seasoning can be an issue, so talk to the server when ordering.

Tip: Though it’s a full-service bar, it’s also a family restaurant, so bring the kids.