Oklahoma Gazette distilled this year’s state ballot questions to help understand what voting “for the proposal” and “against the proposal” actually mean. 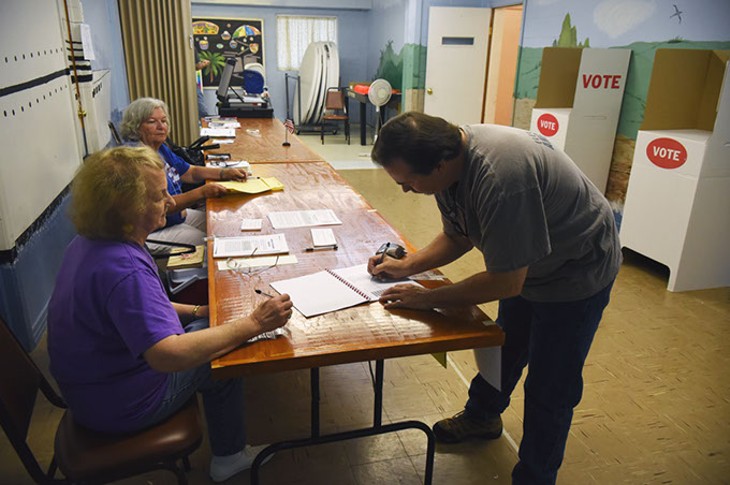 Oklahomans face seven state questions in the Nov. 8 general election that cover subjects ranging from agriculture and education to the use of public funds for religious purposes.

Voters must decide whether they favor or oppose the policies set forth in the state questions. While that seems straightforward, reading the ballot language can be complicated and confusing. Remember, voting “for the proposal” means you support changing existing law. Voting “against the proposal” means you want to stick with current law or are against a new law.

Oklahoma Gazette distilled this year’s state ballot questions to help everyone understand what their votes “for the proposal” and “against the proposal” actually mean.

Yes: A “yes” vote for State Question 776 supports adding a constitutional amendment to Oklahoma’s Constitutional Bill of Rights, which enumerates the rights of all state residents. The constitutional amendment would allow the Legislature to determine methods of execution not expressly outlawed by the Eighth Amendment of the United States Constitution, such as firing squad and electrocution. Additionally, it declares the death penalty shall not be considered cruel or unusual punishment.

No: A vote against State Question 776 keeps the death penalty as a legal option under law, but not written into Oklahoma’s Bill of Rights. House Bill 1879, passed in 2015, already allows for execution methods like firing squad and electrocution.

Yes: Voting “for” State Question 777 supports amending Oklahoma’s Constitution to add “strict scrutiny” rules to protect farming and ranching. Specifically, it would prohibit lawmakers from passing any laws to hinder the advancement of agriculture technology, livestock procedures and ranching practices, except in instances of “compelling state interest.”

No: Voting against the proposal would allow the Legislature and local municipalities the ability to pass laws relating to the regulation of agriculture, including technology, livestock procedures and related ranching practices.

Note: The amendment does not impact trespassing, eminent domain, dominance of mineral interests, easements, right of way and other property rights. Laws passed before Dec. 31, 2014 would be exempt from this amendment.

Yes: A vote for State Question 779 backs amending the Oklahoma Constitution to add a new article to create the Education Improvement Fund. The state sales and use tax would increase by one cent per dollar to provide additional funding to the state’s Department of Education, Regents for Higher Education and Department of Career and Technology Education. From the fund, a $5,000 salary increase will be provided to public school teachers, but funds would not support an increase to superintendent salaries. Specifically, 69.5 percent of funds would be allocated to school districts, 19.25 percent to public colleges and universities, 3.25 percent to CareerTech programs and 8 percent to early childhood education.

No: A vote against SQ 779 is against adding an article to the state constitution outlining the Education Improvement Fund and its ability to raise the state’s sales and use tax by one cent per dollar to help fund three state education agencies.

Yes on 780: A vote for State Question 780 supports amending state laws to reclassify simple drug possession crimes from felonies to misdemeanors as well as raise the dollar amount that determines whether property crimes are a felonies or misdemeanors from $500 to $1,000. The overarching goal is to reduce prison populations and better address issues related to mental health and substance use.

No on 780: A vote against SQ 780 retains state statutes regarding drug possession and simple property crimes.

No on 781: A vote against SQ 781 eliminates the channeling of savings to a fund intended for community services in all of Oklahoma’s 77 counties.

SQ 790: Use of public resources for religious purposes

Yes: A vote for State Question 790 would amend the Oklahoma Constitution to repeal Article 2, Section 5, which prohibits public money or property from benefiting religion or religious groups in any capacity.

No: A vote against SQ 790 supports restricting the use of public money or property to benefit religion or religious groups.

Yes: A vote for State Question 792 supports amending the Oklahoma Constitution to repeal Article 28 (Alcoholic Beverage Laws and Enforcement) and enact Article 28A as outlined in Senate Joint Resolution 68. SQ 792 addresses state liquor sales laws. An individual or corporation could own multiple beer and wine stores but would be limited to two licenses if spirits were sold. If passed, the law would take effect Oct. 1, 2018.

Note: SJR 68 allows grocery and convenience stores to sell wine and high-point beer. Liquor stores could sell refrigerated beer and wine and sell limited grocery items. State residents could place wine shipment orders from wineries up to 30 9-liter cases per year and no more than six 9-liter cases from a single winery.

Election Day: What you need to know

• Electoral College: Oklahomans vote for a presidential and vice presidential candidate. On the ballot with each party candidate’s name, you will see seven elector names under these candidates. These are our members of the U.S. Electoral College, which convenes the first Monday after the second Wednesday in December to officially cast the state’s votes for president. • Write-in candidates: Under Oklahoma law, write-in voting is not allowed. Should a voter write a name on a ballot, their vote for that specific race will be invalidated. • Phones and cheat sheets: There is no law forbidding the use of smartphones to look up information while at the ballot box. Polling places may post signs requesting people turn off phones as to prevent distracting noise. Voters can also bring a cheat sheet for reference when voting.