2016 Election: The Libertarian Party returns to Oklahoma’s ballot after a 16-year absence 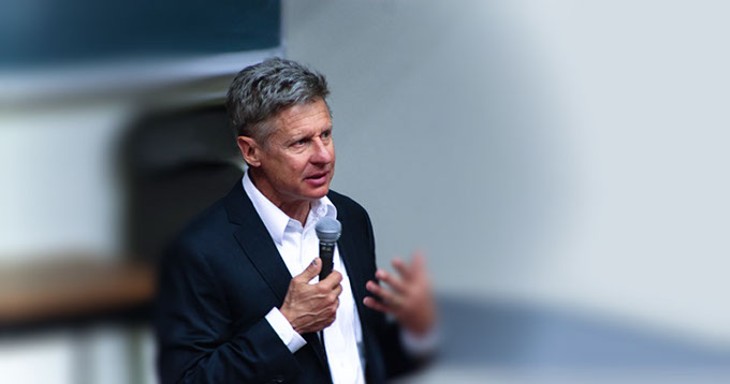 “I do believe that the vast majority of the people in this country are Libertarian; they just don’t know it yet,” Johnson told a CNBC business news cable network reporter in March.

That’s the sentiment Lorrah, who serves as the state director for the Johnson/ Bill Weld campaign, has for Oklahoma.

The Libertarians are a new fit in the landscape of Oklahoma politics, which has been dominated by Republican and Democratic parties for decades.

Earlier this year, national and state Libertarian leaders announced the party received support from more than 42,000 Oklahomans in 76 counties to get the party on the ballot. The Nov. 8 general election marks the first time in 16 years Libertarian candidates for local, state and federal offices are listed on the state ballot. In the past, Libertarians could run, but had “Independent” listed under their names.

Dax Ewbank, Libertarian Party of Oklahoma spokesman, said a large financial investment mixed with diligence from state Libertarian leaders led to a successful signature petition paving the way for ballot inclusion. With Johnson expected to win more votes nationally than any third-party candidate in 20 years, Oklahoma Libertarians have rallied to educate voters about the party’s platform and talk about Johnson and his running mate Weld, former governor of Massachusetts. As the Libertarian presidential ticket continues to pick up national media coverage, the Libertarian Party of Oklahoma also has seen public interest rise.

“The circle that identified itself as the party has now seen new blood and made new friends,” Ewbank said. “We will carry that forward with keeping the Libertarian message alive and growing it in Oklahoma.”

More than four decades ago, the Libertarian Party emerged in American politics as a party grounded in principles like liberty, unique expression of freedom, a caring and humanistic approach to politics, consistency of principles and tolerance. Now, as the nation’s third largest political party, Libertarians also support free trade, marriage equality, abolishing the death penalty, less government regulation and lifting most immigration restrictions.

Metro voters will find libertarian candidates in addition to Johnson and Weld on their ballots when they vote on Nov. 8.

According to Oklahoma statute, for the Libertarian Party to maintain party status and have access to the 2018 ballot, it must capture 2.5 percent of the total number of votes cast in the presidential election.

In other words, Johnson supporters must show a strong turnout Nov. 8. If the party fails to meet the retention law requirement, it would be forced to begin the petition process again to regain ballot access.

The last time Oklahoma voters had an alternative party option for president was when Libertarian Harry Browne ran in 2000. In that election, the party failed to gather 10 percent of the popular vote, which was the requirement at the time.

While polls show Libertarians have a long way to go to rival Republican nominee Donald Trump and Democratic nominee Hillary Clinton, Ewbank said a vote for Johnson would not be wasted in Oklahoma.

“A vote for Johnson does something pretty significant,” Ewbank said. “It sends a message that people are tired of what the two parties are offering and are ready for something more substantive. If we can get the 2.5 percent, it makes sure there is another voice on the ballot in Oklahoma.”

Through social media and the internet, voters have more access to alternative parties than ever before. Technology has benefitted Johnson and Weld’s Oklahoma campaign.

“When reaching out to Oklahomans who may not have every even heard of Gary Johnson’s name, we asked them to ‘Google Gary Johnson,’” Lorrah said. “Once people Googled his name, they are introduced to his online presence.”

Lorrah also sends voters to I Side With at isidewith.com, an unaffiliated political website that features a simple survey on eight issues, from domestic policy to education. After taking the survey, the website matches results to presidential candidates who have similar platforms.

Lorrah said Oklahoma Johnson supporters tend to be millennials born between 1982 and 2004, which are most likely to get political information from social media rather than television news.

Libertarian leaders like Lorrah and Ewbank are optimistic the election results will favor the Libertarian Party. In fact, it’s never too early to think about the next election.

“After Nov. 8, the party will switch gears into looking for our candidate for governor in 2018,” Ewbank said. “That will be a requirement for ballot access, but we also want to put up a good candidate.”

Print Headline: Third-party ticket, The Libertarian Party returns to Oklahoma’s ballot after a 16-year absence. Will it be able to remain?