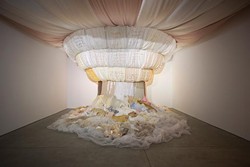 A trip to see the new exhibition at Film Row’s 21c Museum Hotel might prompt a return visit in the not-too-distant future. It is nearly impossible to adequately take in every aspect within a one-hour viewing session.

OFF-SPRING: New Generations made its Oklahoma City debut June 1. The comprehensive multimedia exhibit includes work from more than 40 artists from more than a dozen countries. Works occupy the entirety of the museum hotel’s 14,000-square-foot gallery space.

The exhibition is on display through March 2018 at 21c, 900 W. Main St. Guest speakers and other events are scheduled to occur throughout its run in OKC.

The museum portion of the hotel is always free and open to the public with guided tours at 5 p.m. Wednesdays and Fridays. The first-floor gallery is open 24 hours a day.

OFF-SPRING is a traveling exhibit that has grown and morphed over time. Alice Gray Stites, chief curator and museum director at 21c, said the show’s overall message has refined and emboldened itself as various works have been added.

Different types of rituals come into play throughout OFF-SPRING. The works explore cultural and religious customs and the complexity of the ties that bind. It also shows how those customs and connections are forever changing, especially in the internet era.

“The show is very much about exploring the nature of familiar ritual plus the communal rights that happen in sacred spaces,” Stites said.

A closer look at some of OFF-SPRING’s individual works further clarifies the theme.

The first thing most guests will notice as they walk into 21c is a big, white dinner table adorned with an elegant wedding cake. Two chairs are on opposing ends of the table. Instead of people, the chairs hold display screens, one showing a man’s face and the other showing a woman’s. The two are engaged with their phones, almost unaware of the other’s presence.

The multimedia piece by New York-based artist Rachel Lee Hovnanian is titled “Dinner for Two,” but the only one eating is a model mouse nibbling at the wedding cake. The couple featured in the displays never talk, but clicking and phone noises can be heard.

“If you think it’s your phone going off, you won’t be the first person,” Stites said.

Near the entrance is an ornate pair of 19th century-style bonnets made entirely of about 40,000 pearl-colored corsage pins.

American artist Angela Ellsworth made “Seer Bonnet XXI (Eliza) and Seer Bonnet XX (Emily)” as a statement on sister-wives within the Mormon church. Ellsworth is a descendant of Lorenzo Snow, the fifth president of The Church of Jesus Christ of Latter-day Saints.

The two bonnets rest facing each other, joined by a single band — forever in opposition but also forever connected. Stites said Ellsworth does not view this piece and her other work as an indictment against sister-wives but as an opportunity for them to take possession of their own lives and destinies.

The Seer Bonnets function as a metaphor for the rest of OFF-SPRING.

“They draw you in,” Stites said. “They’re very beautiful. Then they hit you with that sharp pin.”

“We don’t know if it’s an internal experience that has made her lose her mind or if it is the boredom of school,” said Stites. “Is it the tedium or pressures of conformity as a child in school, or is it some sort of external tragedy that has caused her to lose her head?”

Stites said Muller was very interested in the idea of the martyrdom of Catholic saints, which has often occurred by fire. Fire and burning has significance in Catholicism and many other religions as a symbol of purification, destruction and more.

In the piece, Muller establishes Clarysse as a martyr, but the viewer must decide the cause.

OFF-SPRING is loaded with exciting photography, including some work from celebrated American artist Carrie Mae Weems. The exhibit includes “Untitled (Woman and Daughter in Make-Up)” from her acclaimed Kitchen Table series and chromogenic print “May Flowers.”

The largest piece in the OFF-SPRING collection is one that is new for the exhibit’s OKC incarnation. South African artist Frances Goodman collected dozens of donated wedding dresses and hemmed them together for “The Dream,” a large, sail-like canopy that hangs from the 21c ceiling and drapes across the floor.

Goodman interviewed several South African women between the ages of 20 and 60 about their thoughts on marriage. Their thoughts and ideas are embroidered across the dresses to form a collage.

“You can see everything from joy, desire, longing, excitement to angst, envy and misery,” Stites said. “The voices begin to overlap each other so you get this complex portrait of the meaning of the wedding day and people’s understanding of marriage, both from the individual perspective and the larger institution of marriage.”

The opening of OFF-SPRING also marked the Kentucky-based hotel chain’s one-year anniversary in OKC. Stites said the first year was very successful and the museum hotel was able to establish a few vital community connections with institutions like Oklahoma City Museum of Art and Oklahoma Contemporary Arts Center.

A new 21c hotel in Nashville, Tennessee, marks the company’s seventh location. Stites said the local facility is one of the chain’s premier additions.

“We have more space in Oklahoma City than we do at any other 21c,” she said.

Stites is also happy that 21c has connected with several talented local artists, some of whom have been featured in the hotel’s gallery space.

“The community has embraced 21c — attendance at events and tours has been excellent,” she said. “We’re really excited to get to know other members of the arts community.”

The art mission for 21c is to purchase, collect and borrow the most compelling and dynamic examples of modern art. A lot of those images tend to be thought-provoking, because that’s what art does.

“[Art] can welcome us in with a beautiful image, but a beautiful image can illuminate other aspects of reality and our world,” she said. “That’s the function of art: to provoke us into asking questions and creating conversations with each other.”