OVAC’s 24 Works on Paper continues its mission to bring art to Oklahomans across the state. 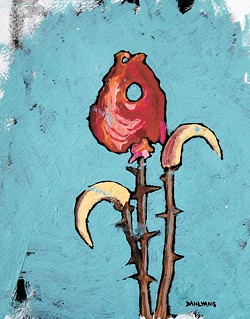 In printer’s terminology, two dozen sheets of paper don’t quite make a quire, but in Oklahoma, they might make a brief introduction to contemporary local art. Established in 1985 by Oklahoma Visual Arts Coalition (OVAC), 24 Works on Paper is a biennial exhibition traveling across the state and featuring living local artists. The latest iteration, which began in August of 2016 at Guymon Public Library, made its final stop at Gaylord-Pickens Museum, 1400 Classen Drive, where the works will be displayed until Jan. 13.

Krystle Brewer, executive director of OVAC, said the nature of 24 Works makes the exhibit easier to transport across the state and allows smaller galleries that might not be able to accommodate larger works to be included. New stops on the current tour included venues in Guymon, Altus, Pawhuska and Alva.

“This is probably one of the more conservative of our programs in the fact that it is kind of limited to a very traditional material and display — works on paper that are mounted in frames — in contrast to some of our other programs that are less object-based and more process-based,” Brewer said. “It does make it very simple to put together a traveling exhibition. There are only two frame sizes — large and small — and so by having the works on paper, it does make it very easy to move around from place to place, and also by not needing to have specific pedestal dimensions for 3-D works. ... Whereas some of our other programs focus more on larger works that are maybe installations or projects that take months or years to complete, this is kind of the other end of that spectrum.”

By making the works of contemporary Oklahoma artists accessible to people in different locations, Brewer said the exhibition allows for statewide cultural cross-pollination.

“I think it connects audiences to artists and their works that they may not have otherwise seen in their community,” Brewer said. “For someone in Guymon that’s really far away, they may not travel to see the work of a Tulsa artist that’s being displayed in Tulsa. … It’s also kind of nice to see a very quick survey of 24 artists working across the state together in one place. I’m not sure that there’s any other exhibitions quite like this.”

Even previous iterations of 24 Works are significantly different from one another, Brewer said, because works for each exhibition are selected by different curators with their own sets of criteria.

“One approach to curating is simply picking the best of the best, and there may or may not be connections among the work,” Brewer said, “but I think other curators maybe look at the work that’s presented, and obviously quality is a big part of that, but also looking at the natural trends that emerge from the pieces that are submitted. So then I think that some common themes just kind of organically come out of that.”

The current exhibit’s curator, W. Jackson Rushing III, is the Mary Lou Milner Carver Chair in Native American Art and Adkins Presidential Professor of Art History at the University of Oklahoma. In his curator’s statement, Rushing wrote, “Although I was hoping for diversity, my only agenda, frankly, was my own visual pleasure, and yet I hope viewers will agree that the exhibition has an internal integrity. Like Oklahoma, the works are iconoclastic and offbeat; tough and yet sweet and tender; magical and real; and both surreal and sensual.”

One of humankind’s older artistic media, paper can be extremely versatile, Brewer said, and the pieces in 24 Works reflect many of its possibilities.

“I think that this exhibition is great because there’s such a variety,” Brewer said. “So you have someone like Katelynn Noel Knick that’s doing drawing on paper, but then next to it, you have someone like Molly Murphy-Adams, who’s a Native artist who’s actually doing beadwork on the paper, and then, of course, you also have someone like Cathleen Faubert who’s doing photography ... or like Ginnie Baer, hers has glitter and an unusual material, Oklahoma snow, she has listed as one of the materials she used to make her piece.”

In more abstract terms, Rushing describes “fish-headed flowers that play with outsiderness from the inside; the soaring, fragile beauty of transcendent birds … paeans to the lush beauty and destructive force of nature (erosion and cyclones); and the oneiric fluidity of Freudian dreamscapes.”

Brewer, who first began working with OVAC as a volunteer intern in 2011, became the coalition’s executive director this year after the current exhibit began, but she said she is already planning next year’s exhibit, hoping to map a new, more inclusive route.

“Each year, we try to include more communities so that more people around the state have the opportunity to see the exhibition,” she said. “We’re always constantly doing something.”

The OVAC website offers an educational guide for teachers and students viewing the exhibition. It includes a glossary of basic visual art terminology and a list of suggested discussion questions. Paper is famously thin, but the depth on display is limited only by the eye of the beholder.

“How could so much life be compressed or called out in 24 modestly scaled works on paper?” Rushing wrote. “Like Oklahoma, the exhibition is surprising in both what it reveals and thinly veils from view.”

Print headline: Paper product; OVAC’s 24 Works on Paper continues its mission to bring art to Oklahomans across the state.