For Oklahoma Gazette’s 40th anniversary, here’s a look at how its coverage has changed over the last four decades. 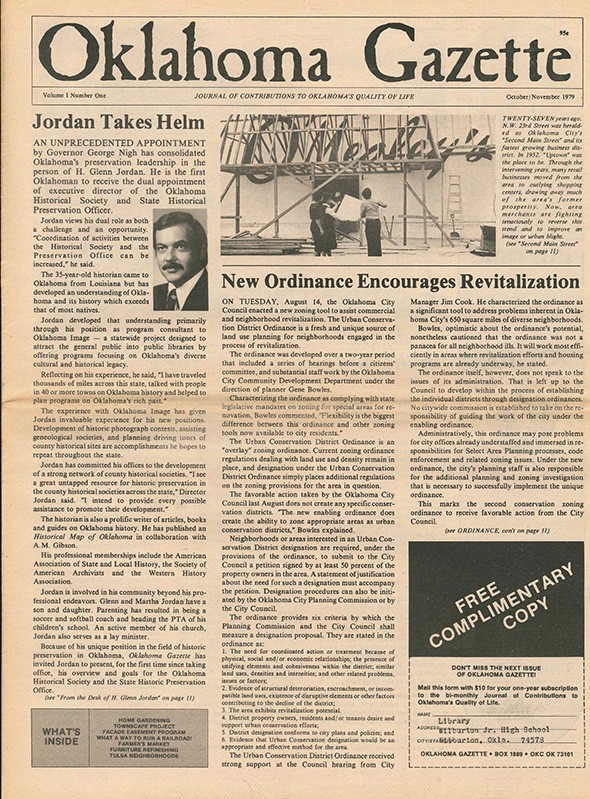 Oklahoma Gazette debuted in October 1979 as a “journal of contributions to Oklahoma’s quality of life.” It was 12 pages under the guidance of publisher Bill Bleakley, editor Cynthia Emrick, managing editor Mary R. Grace and businesses manager Stephanie Emrick.

Stories appeared without a byline in the first issue, but many of them dealt with issues of business revitalization and historic preservation — including a story on and column by Hal Jordan, who had recently become director of the state’s historical society and state preservation officer. 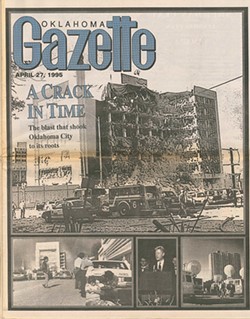 In the first issue, there were also odes to food and drink, which would expand to become staples in the publication over the decades. There was a story on organic gardening and a column by Susan Wilson, who owned a local health food store and ended the piece with a recipe for tofu croquettes. R.D. Baron wrote a column devoted to enjoying fine wine.

J.K. Baron wrote a restaurant column titled “Bill of Fare a la Baron,” and the first piece is devoted to perhaps Oklahoma City’s finest restaurant at the time, The Cellar, located in the basement of the Hightower Building.

The final page of the first issue is a photo essay devoted to historic buildings around Oklahoma City with the promise to go in-depth on each of them in coming issues. “Restoration work doesn’t make the big splash that new construction does — mainly because an existing building has already claimed a share of our visual territory. These proud Oklahoma City structures; however, are raising revitalized dignities that demand attention be paid: Union Station, Colcord Building, Leonhardt Building, Harbour-Longmire Building and Montgomery-Ward Building.”

In the beginning, Gazette looked like a regular newspaper with stories and headlines on the first page. It finally took the layout with which we are now familiar in February 1981 with the cover page dedicated to Western fashion.

Gazette published monthly until October 1982, when it went biweekly under the guidance of general manager Randy Splaingard and editor Jean E. Scott. In July 1982, Penn Square Bank’s failure led to a cratering of the local economy, and although the event paid dividends for Gazette because advertisers could no longer afford to run in The Oklahoman, there was no mention of the bank’s failure between July and the October issue of Gazette.

In October 1984, Gazette went weekly with a cover story devoted to the Cerebral Palsy of Greater Oklahoma City’s need to find a new building for housing after the city council surprisingly vetoed its request to take ownership of a home in the Zachary Taylor neighborhood. The story highlights the hardships of the disabled community before the passage of the Americans with Disabilities act in 1990.

The Oklahoma City economy struggled through the 1980s and needed a boost in 1993 when Mayor Ron Norick proposed the MAPS sales tax initiative. A Dec. 23 story by Jonathan Nicholson ran under the headline “City’s anti-tax image challenged by passage of MAPS sales tax.” 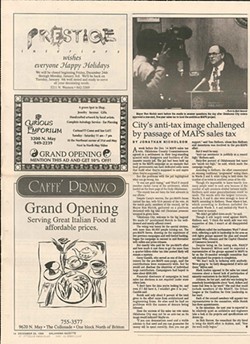 The story details the efforts Norick and officials made to get the controversial measure passed and includes a photo of Norick standing on a platform decorated with big, fake red Christmas presents with green bows proclaiming, “Oklahoma City, welcome to the big leagues!”

Oklahoma City is still dealing with the ramifications of the bombing of Alfred P. Murrah Federal Building on the morning of April 19, 1995 that killed 168 people and injured 680 others. The issue of Gazette published April 27 is titled “A Crack in Time.”

It opens with columns by associate editor Pam Fleischaker and Stephen Sloan, a political science professor at University of Oklahoma with a specialty in international terrorism. Sloan’s column urges citizens not to let terrorists win and to find a way to continue their daily lives.

”We must not give in to stereotyping and stigmatizing of our fellow citizens and visitors who have come from regions where international terrorists operate, for they too have been the victims of terrorism. We must not let our hatred or fear allow us to be held hostage to the event that started 9:02 Wednesday morning,” Sloan wrote.

Letters of support poured into the Gazette from around Oklahoma and across the country. Coverage of the blast and its aftermath six days after the event are chronicled over 12 pages by editor Mike Easterling and writers George Lang, Phil Bacharach, Madeline Tower and Nicholson. Photos by Mark Hancock depict the devastation in the city and the nationwide attention that followed. Future mayor Mick Cornett published a column in the issue urging people to have the courage to overcome hatred. Bacharach became one of the few writers to correspond with domestic terrorist Timothy McVeigh, and their letters were later published in Esquire. 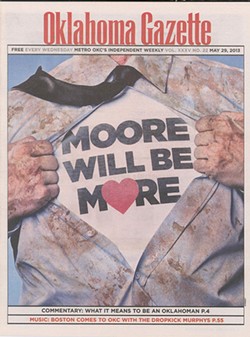 As the wounds of the bombing began to heal over the coming years, Oklahoma City fulfilled Norick’s proclamation of becoming a big-league city. What is now Chesapeake Energy Arena was funded through the original MAPS project, and improvements needed to make it home for Oklahoma City Thunder were paid through an extension of MAPS for Kids, which included a letter in support from Gazette publisher Bill Bleakley in February 2008.

In May 2013, an EF5 tornado touched down in Moore — in nearly the same area as the city’s infamous May 3, 1999 tornado — leaving a path of destruction that killed 24 people. Longtime Gazette photographer Mark Hancock was on the scene within minutes after the storm siren ended. The May 28 cover story “Moore will be more” includes team coverage from writers Tim Farley, Louis Fowler, Peter Wright and Bacharach with photos from Hancock and Shannon Cornman. 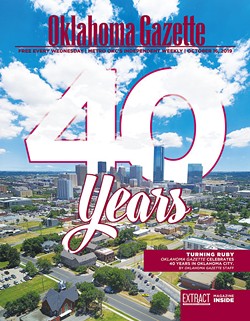