We all get hungry. But there’s a certain ravenousness that takes hold around mid-April. People mysteriously get mellow, but also quite intensely focused on snacks. Oddly enough, this pervasive need for food is not necessarily preceded by an excess of planning, which leaves many at home, stomachs rumbling, at the tender mercies of the munchies. Thank goodness these local restaurants cater to those in need.

There is no way The Pip was designed by someone who hasn’t experienced a few mood-altering substances. A wrap filled with black beans, rice and Cheetos-crusted chicken? What’s fascinating is how much the menu works regardless of one’s appetites. The Ramen Rap is a work of art. The Ring of Fire is a pizza that will burn the hunger out of you from the inside out. Add on a gorgeous view of 23rd Street from the roof and it’s always Guyutes time. 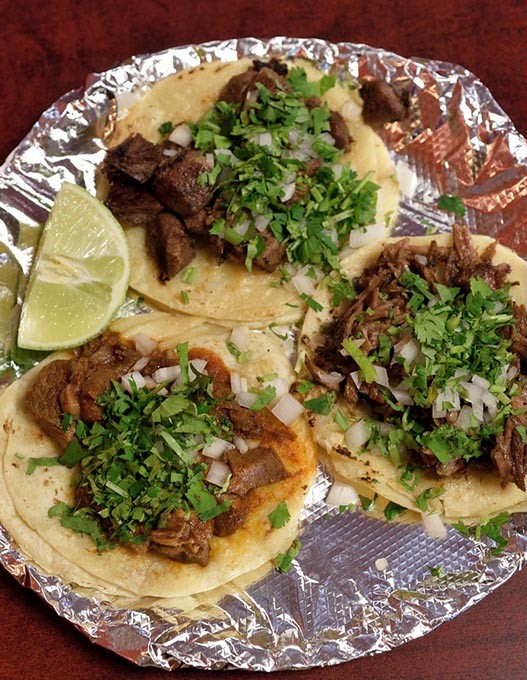 “But where is the taco emoji?” people asked. Had we really fallen so far that the act of typing out the word “taco” became too much to bear? It’s not as if you even have to make the tacos yourself; certainly you can spare the effort to type three more characters. And for Taqueria La Tropicana, you should be able to type all 19 letters and quite a few more, because these are the tacos dreams are made of. They’re so good you should savor them, but small enough you can just order more.

Zorba’s does so much more than gyros. Much more. Yet when it really comes down to it, you know you want that fatty, juicy seasoned meat; the soft, chewy pita; and the tangy bite of the tzatziki sauce. Kebobs are a delight. The tabbouleh is light and flavorful. The avgolemono soup is a taste explosion and worthy of your time. Zorba’s was the first place we had a gyro and where we continue to go for that comfort food classic from across the sea.

People don’t line up for nothing. Whether you’re floating in on a cloud of smoke or waiting for breakfast to fuel the rest of your day, Waffle Champion is beloved by all for tender waffle sandwiches filled with daring, crowd-pleasing flavor combinations. Newly added to the menu is the Cheeseburger Mac, which combines grass-fed bison, macaroni and cheese, lettuce and “sassy sauce.” It’s breakfast! It’s lunch! It’s a midnight snack!

Open Wednesday through Sunday, this University of Central Oklahoma favorite does late-night and early morning food for those who sleep odd hours but still enjoy quality meals. So what if it’s 1 a.m.? Does that mean you don’t deserve battered, fried shrimp covered in bacon and cheese? If you’re looking for a breakfast that will put you right to sleep, it’s hard to beat chicken and sweet potato waffles.

Tucked away on the Bricktown canal, Knucks Wheelhouse built a following with its COOP Ale Works-powered crusts and delectable topping combinations. The Hoochie Cuchi is an upscale treat covered in pesto, bacon and prosciutto. The Mediterranean is slathered with hummus and vegetables for an unforgettable slice. But for ’shroom lovers, the only choice is You Must Be Trippin’ with portabello mushrooms, mozzarella, pecorino and truffle oil.

Corn dogs are nature’s perfect fruit. Grown in the corn orchards of Iowa, these seedless wonders have a stem that extends most of the way into the “meat” of the corn dog, almost like a handle. Crisped in the sun, they have a golden-hued crunchy skin of corn cake giving way to a juicy center. This all-natural treat has sustained our earliest ancestors during the lean season known as The Fair. Now, Anchor Down brings this miracle to us on the daily.