420: Many find medicinal benefits when using cannabis, regardless of legality 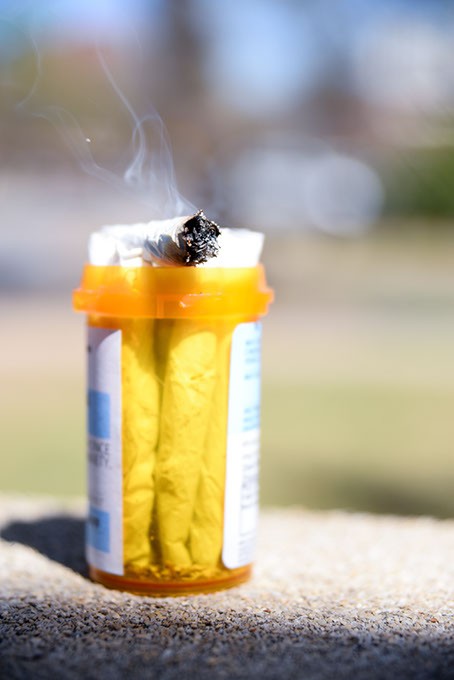 Editor’s note: Oklahoma Gazette collaborated with University of Oklahoma journalists and the school’s campus newspaper, The Oklahoma Daily, to report on issues related to medical and recreational marijuana use. Find more coverage online at okgazette.com and oudaily.com. The names John Doe and Dave Smith are pseudonyms for sources who wished to remain anonymous.

Although marijuana is illegal in Oklahoma, some University of Oklahoma (OU) students use the plant as a form of medicine to fight ailments they struggle with daily. While marijuana has been legalized in the neighboring state of Colorado, a debate still rages in Oklahoma over whether or not to decriminalize it.

Oklahoma-based groups like Oklahomans for Health have been waging campaigns to legalize marijuana for medicinal use. The group also filed an initiative petition April 11 in an effort to put the proposal to a public vote on the November ballot. (Read more about the petition on P. 5)

Sunil Kumar Aggarwal, a physician-scientist and adviser to the Oklahomans for Health initiative, said he believes marijuana has healing properties that can help people with some medical ailments. Aggarwal is a native Oklahoman who identifies himself as a “cannabinologist” on his website.

Aggarwal said he studies the cannabis hemp plant and works to further cannabinology of all kinds. He wants to help people like John Doe, a biology junior at OU, who need the plant for its healing properties.

Doe said he feels marijuana helps him greatly with his sleep apnea. He said he has had apnea since childhood and marijuana has been the most effective treatment to date.

“I felt that marijuana calmed me down better and made me relax a lot more than over-the-counter drugs,” Doe said. “It was more effective than melatonin or other drugs.”

Doe said he continues to do research on the use of marijuana for medicinal purposes and he has yet to be negatively affected by it.

The U.S. Drug Enforcement Administration has announced it’s reviewing how to classify marijuana, and a change could loosen restrictions on researchers. In 2013, CNN health reporter Sanjay Gupta found just 6 percent of marijuana studies in the United States focus on the substance’s medical benefits. The rest focus on harm.

“Marijuana helps to numb my pain; I would really like it to be legalized here,” Smith said. “Not for recreational purposes, but for medical purposes, yes. Just like any other drug, it has its uses.”

Aggarwal has spoken about how marijuana’s illegality in Oklahoma has impacted the way people perceive it. According to Aggarwal, marijuana has been used medicinally throughout history and has been unfairly branded with a negative stigma through politics and ignorance.

“Cannabis [or marijuana] is a traditional medicinal plant that’s been around since before recorded history, and we know that people have been using it for medicinal purposes,” Aggarwal said. “I looked into a lot of medicinal history and a lot of geographic history for where it was used and when it was used. I found out there was a big discovery in the early ’90s where the endocannabinoid signaling system was discovered.”

Aggarwal said the discovery was a breakthrough in understanding how natural marijuana compounds interact with the human body. He said the endocannabinoid signaling system plays an important role in regulating physiological functions, including mood, appetite, inflammation and pain perception.

Aggarwal said that finding the signaling system’s involvement in so many things helped validate many of the traditional understandings of cannabis resin as having medicinal qualities. He found cannabis can have a positive effect on some of these functions in helping treat illnesses such as anxiety, depression, nerve pain and post-traumatic stress disorder.

In the end, Aggarwal said he hopes campaigns like the one launched earlier this month by Oklahomans for Health achieve their goal of medicinal marijuana legalization. With the correct supervision of a physician, he said, marijuana is one of the safer options available to treat certain illnesses and symptoms.

Print Headline: Pot perception, Many find medicinal benefits when using cannabis, regardless of whether or not it’s legal.