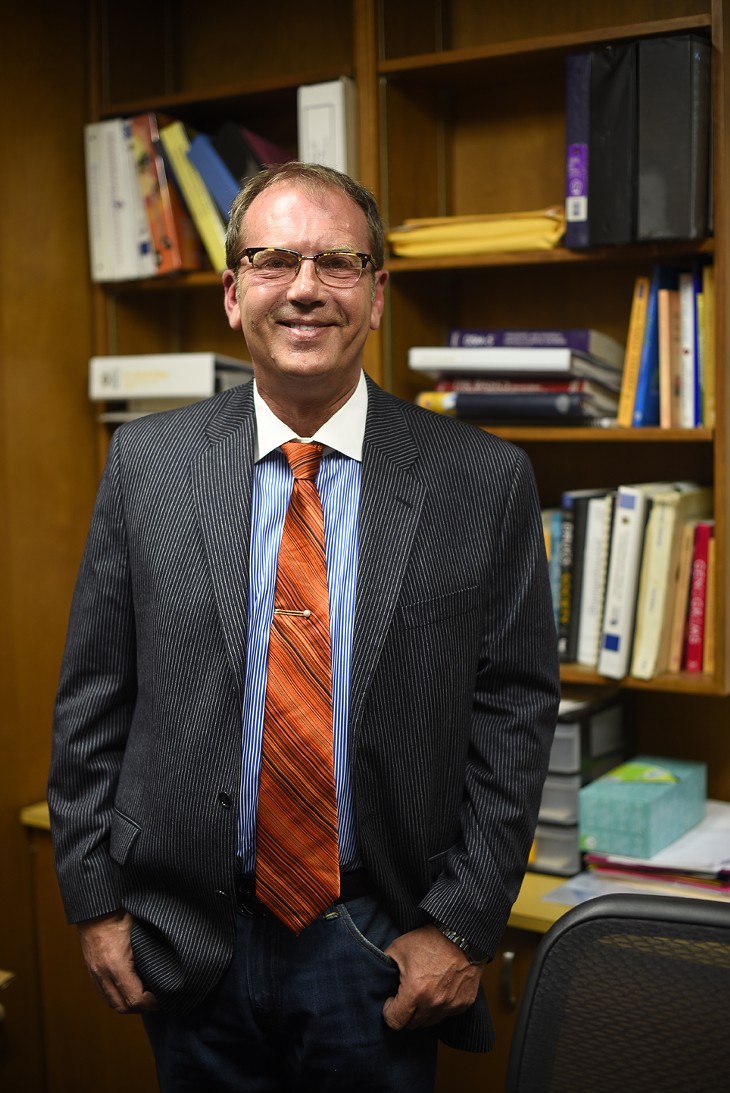 J. Keith Killian remembers a time when turning away patients was the norm.

“If a patient came in and said they were depressed, but I found out that they were abusing alcohol, I would tell them, ‘Until you stop using alcohol, I can’t treat your depression,’” Killian, a physician and psychiatrist, recalled. “It wasn’t until the early 2000s that a lot of people started asking the question, ‘Why aren’t we treating these at the same time?’”

Now, the co-occurring treatment model is the standard. Research supports the best outcomes when treating a dual diagnosis, or more than one disorder at a time, like when a patient with opioid addiction also has mental illness. Other disorders that co-occur are depression, anxiety, trauma or attention-deficit hyperactivity disorder.

As the director of the substance abuse graduate program at the University of Central Oklahoma (UCO), Killian trains the next generation of addiction and mental health counselors. A majority of graduates become licensed as alcohol and drug counselors with a mental health designation, which is needed to treat a dual diagnosis. UCO is the only public state college with a freestanding substance abuse studies program. Its master’s degree track began six years ago, not long after patients with co-occurring disorders became the norm rather than the exception.

“When we first started looking at the co-occurring issue, we knew it was a big problem for people,” Killian said. “Now, we almost expect that a patient is suffering from more than one thing. So many people continue their substance abuse or start their substance abuse as self-medication for many different things. You’ve got to take care of them both and treat them equally.”

With statistics showing opioid use on the rise in Oklahoma, coupled with estimates that six out of 10 Oklahoma adults do not receive the mental health and substance abuse treatment they need, addiction and mental health counselors are needed now more than ever.

In Oklahoma City, A Chance to Change Foundation stands ready to help. The nonprofit offers education, treatment and prevention programs to those suffering from addictions and behavioral disorders. Last year, staff served 2,223 clients.

At A Chance to Change, counselors involve a user’s family in treatment.

“Counseling is a huge piece, not only for the addicted person, but the people in their lives,” Cunningham said. “[Addiction] does not just affect one person, but the whole family.”

“What I notice, it starts with alcohol or cannabis and moves up the ladder to opioids. Sometimes people go to heroin,” Cunningham said. “There is the other side: people who suffer from chronic pain or underwent back surgery. They get a high dosage of hydrocodone or oxycodone and become addicted.”

Prescription opioid abuse is not limited to Oklahoma. Last month, U.S. Department of Health and Human Services (HHS) Secretary Sylvia Burwell called the opioid epidemic “one of the most pressing public health issues in the United States today.”

When speaking at the National RxSummit in Atlanta in late March, President Barack Obama said opioid addiction is “devastating communities.” He said that in 2014, 28,000 Americans died of opioid overdoses, more than the number of people who died in traffic wrecks.

In mid-March, the Centers for Disease Control and Prevention published new rules that stressed doctors, when possible, should try to avoid prescribing addictive opioid painkillers for patients with most forms of chronic pain.

Counselors look to a variety of different ways to treat addiction. Depending on factors and circumstances, a patient might receive medication, attend group or individual counseling, attend meetings, participate in a 12-step program or begin a supported plan of absence, stability and consistency.

While sometimes hard for others to understand, addiction is a disease of the brain and should be treated like any other chronic illness, both Cunningham and Killian said.

“For the addict to say, ‘I wouldn’t do this again.’ When they say that, they actually mean it. Because this is a disease of the brain, willpower is typically not enough to stop it.”

As a consultant at a local clinic, Killian has noticed opioid drug dependence impacts most age groups, men and women and all income levels.

“Every one of them has something in common,” Killian said, “the inability to take control of this chronic disease.”

Both Killian and Cunningham believe increased awareness about substance use, abuse, dependency and treatment is needed. Addicts and their families need to understand what is happening and know that help is available.

One resource is Drug Free Oklahoma at drugfreeok.org, a website created by a woman who lost her brother to a prescription drug overdose. Michelle Evans began the site to bring awareness to prescription drug abuse, her platform as Mrs. Oklahoma in 2015. Signs and symptoms of abuse and listings of treatment facilities and the help line number, 1-855-378-4373, are posted.

“There is help available,” Evans said. “I know it seems scary, but the hotline is there for crisis situations. This is a resource, and there is no reason for waiting to get the help that you need.”

Oklahoma City Al-Anon, a resource for relatives and friends of alcoholics: okcalanon.org

A new report finds that people with marijuana use disorder are vulnerable to other mental health disorders.

Researchers from Columbia University and the National Institute on Alcohol Abuse and Alcoholism, part of the National Institutes of Health, found that 2.5 percent of American adults suffered from marijuana use disorder, a condition characterized by the harmful consequences of repeat cannabis use. Findings show that people with the disorder, specifically those with severe forms, experience mental disability. The study calls for developing evidence-based treatment.