“If you’re walking down the street and you smell weed, that’s not uncommon,” she said.

by Derek Peterson and For The Oklahoma Daily 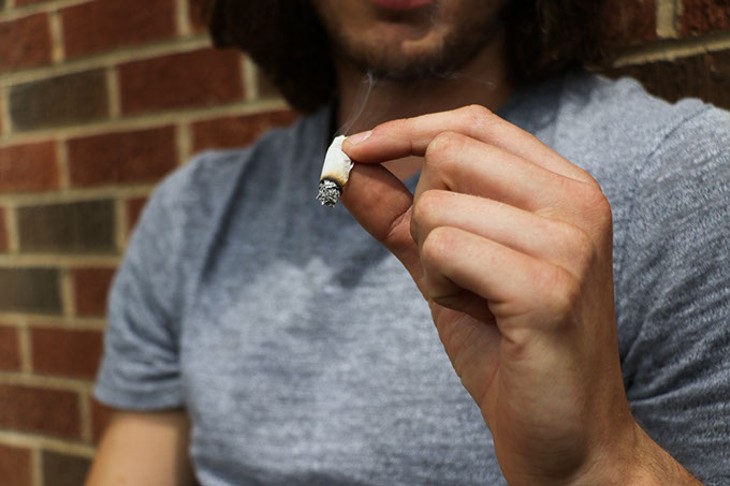 Editor’s note: Oklahoma Gazette staff collaborated with University of Oklahoma journalists and the school’s campus newspaper, The Oklahoma Daily, to report on issues related to medical and recreational marijuana use. Find more coverage online at okgazette.com and oudaily.com. The names Lars Harris and Hannah Jones are pseudonyms for sources who wished to remain anonymous.

Students who travel from states in which marijuana is legal to states where marijuana is illegal often experience culture shock and encounter new attitudes toward the controversial drug.

Marijuana enthusiasts at universities throughout the country smoke the drug that is outlawed entirely in more than 20 other states. Marijuana is legal for medicinal and recreational use in only Washington, Colorado, Oregon, Alaska and the District of Columbia.

The controversy has even made its way to Norman, where students who come from states whose governments allow pot experience a shift in the popular beliefs associated with the drug.

One student called it “an entirely different institutional attitude towards marijuana.”

Lars Harris lived in Colorado before coming to school at the University of Oklahoma (OU).

He said it was a bit of an adjustment to move from a place where marijuana wasn’t seen as a problem to a state where just the word “marijuana” carries a hint of criminality.

“There seems to be sort of an association with weed and criminality that exists through culture where the people who smoke weed are marked as criminals,” Harris said. “That has kind of shifted. Weed has become something that is more like alcohol, something that everybody does and something that your friends do even if you are an ‘uppity’ person.”

Sarah Pitts, a journalism senior at OU and a former Colorado resident, agreed that there is a negative perception surrounding weed in Oklahoma.

Pitts said that perception hinders the ability of people to truly learn and have meaningful discussions about the drug and whether or not to legalize it.

“People are more open-minded, especially in states like Washington and Colorado, to both the pros and cons of legalization. Because it’s really heavily criminalized here, it continues to keep that negative connotation,” she said. “I do wish that people were maybe a little more open to talking about options, because I think if that happens, then more research could be done on marijuana.”

Pitts also said if people allowed the conversation to take place and allowed for research on the medicinal and beneficial aspects of weed, more of their concerns would be answered and they might not be as opposed to weed as before. She said that conversation has already happened in Colorado and people have accepted marijuana.

“[In Oklahoma, where weed and criminality are somewhat linked,] this cultural shift starts with a recognition of marijuana as something that’s not merely a recreational, criminal drug, but also something that has important medicinal uses,” Harris said. “I think that the scientific literature is pretty conclusive that there are medicinal uses for marijuana.

Another out-of-state student said she has noticed the difference in how people obtain weed — not necessarily the means by which the drug is acquired, but rather the methods to get it and its prices.

“The price is different here, too,” said Alannah Hobson, a human resources management junior at OU and former Colorado resident. “You’re going to pay more here than you are in [states in which it’s legal]. In high school, you could probably get a decent amount for $10, and it wasn’t a big deal. But here, you get the same thing for, say, $20.”

Harris has had similar experiences.

“It was always easily available; I never had to search to find weed, right? Here it’s like, ‘Oh, let me text 17 different random people to see how this is going to work out,’” Harris said. “It’s a completely different world.”

Hobson also said she thinks the drug’s more strict regulation in states where it is illegal leads to some of the negative student perceptions about it. She also detailed how she is often greeted by students who discover she’s from Colorado.

“Typically, the first question people ask is, ‘Do you want to bring me some back with you next time you go?’ I understand; I would be curious too. It’s just different,” Hobson said.

Pitts said she hears the same kinds of things.

“The biggest thing I noticed was that, especially during freshman year, whenever I said I was from Colorado, most people would say ‘Oh, do you smoke a lot of weed?’” she said. “That was just the first thing that everyone asked about, and I thought that was so funny that people cared so much and just automatically assumed that I smoked a lot of weed and wanted to talk about it. It seems just so novel here.”

Hannah Jones, an environmental studies senior at Seattle University who asked to remain anonymous, moved to Washington from Colorado and said she didn’t experience the same kind of cultural shifts that Pitts, Hobson or Harris have experienced.

“Honestly, I feel like there hasn’t been that great of a shift,” Jones said. “It hasn’t seemed like there’s been this great boom of people smoking weed because it’s legal. The people that wanted to do it in the past would find a way to do it, and I think now some people try it out that didn’t smoke before, but it didn’t change that much.”

Jones said the popular correlation of criminality and marijuana one would find in Oklahoma doesn’t exist in Washington.

“If you’re walking down the street and you smell weed, that’s not uncommon,” she said.

Jones said students at her school feel more than comfortable talking about marijuana use in public, even with certain professors.

Pitts said that type of conversation isn’t likely in Oklahoma.

“In the South, a lot of people seem a little more conservative about it and are pretty adamant that they would never want to see it legalized here,” she said.

Both Hobson and Harris talked about the different 420 celebrations that occur in states where marijuana has been legalized and said that type of widespread use is so different from what happens in Oklahoma.

“It just happens so much [in Colorado]. It was just different to come here and have people that have never smoked before,” Hobson said.

Print Headline: Smoking scholars, Students from states in which marijuana is legal experience a range of bizarre cultural differences when they come to school in Oklahoma.