“Kanye West is never boring — that’s the thing,” Allen said. “It’s like a 12-sided die; there’s just always something to look at and you never know what you’re going to get.” 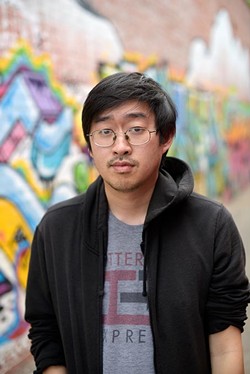 Together, Mike Allen and James Nghiem craft a series of local art shows dedicated to certain aspects of popular culture.

Their own interests always play a role in the themes that are chosen. Past shows have paid tribute to the Street Fighter video game series, the film catalogues of directors Wes Anderson and Quentin Tarantino, anime series Cowboy Bebop and mysterious, world-renowned protest artist Banksy.

Naturally, each show caters to a new niche audience, but perhaps none of Allen and Nghiem’s co-produced shows have come as hyper-specific as 808s & Solid Snake: A Kanye West/Metal Gear Art Show.

A lot of art shows are unique, but locals will be hard-pressed to ever find another show specifically dedicated to Kanye West and Metal Gear in Oklahoma or anywhere.

“We’re both into those things, and it’s here and there’s a lot of effort behind it,” Nghiem said. “It’s going to be pretty unique and pretty well put together.”

None of Allen and Nghiem’s previous art shows have been so specific to the pair’s particular set of interests, perhaps to the detriment of some outside participation. Still, 808s & Solid Snake might best embody the duo’s commitment to creativity and bravery in local event booking.

“I don’t think there had been a Cowboy Bebop show or a Banksy show, but somebody could probably do that,” Nghiem said. “But this is us.”

Nghiem so far has heard from around 30 visual artists who expressed interest in submitting work for this show. Overall, interest is tempered compared to some other art shows he has recently hosted but still strong considering the specificity of the exhibit.

All art is for sale, and $10 from every sale is donated to Regional Food Bank of Oklahoma.

One of the most exciting additions to 808s & Solid Snake is its themed fashion show, which invites designers to submit West- and Metal Gear-themed outfits for the runway.

Allen is one of the show’s participating designers. He is planning a Cold War-styled outfit inspired by Metal Gear Solid: Peace Walker, which takes place in 1974. While the game series might have been his direct inspiration, he said there is a West tie-in as well.

“Kanye, when he came out with his first clothing line, he had a lot of the same colors like olive drab, and it looked very Jedi or Star Wars,” Allen said. “But there’s some crossover there in terms of color.”

Upstairs at the Speakeasy, comedian Ryan Drake hosts a live play-through of Metal Gear Solid: The Twin Snakes. Drake and other comics will make jokes and comments as the game progresses. The hope is that it will feel like a casual hangout with friends playing video games on a lazy weekend afternoon.

Allen said of all the Metal Gear games, Twin Snakes might be best suited for this kind of commentary.

“If they wanted to riff over it, that’s the game to do it,” he said.

Music for the night is catered by rapper Teflo $ (pronounced Dollar) and experimental hip-hop/rock band Flock of Pigs. Tricknology Beats presents a special blend of West’s music with music from Metal Gear soundtracks, which are often art-focused mixes, like much of West’s work.

Some of Allen and Nghiem’s other Speakeasy art shows included special themed menu items from the bar. Nghiem said there are plenty of opportunities to develop specialty drinks based on these two pools of inspiration and the Speakeasy staff is working to develop a menu now. 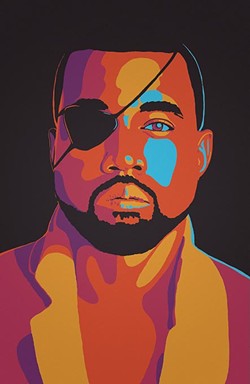 The uniqueness within the 808s & Solid Snake mashup poses a quandary for participating artists, but sometimes working within a strict set of constraints and rules can lead to increased creativity.

“I think we’ve done that in the past,” Allen said, “but this one is less straightforward, so it really presents a challenge.”

The pop-culture combination might not make sense on its surface, but Allen and Nghiem said there are certain parallels to draw between the “Gold Digger” rapper and Hideo Kojima, the Japanese creator, director and writer for the Metal Gear series.

Both West and Kojima are known for being visionary creatives. Just as each of West’s albums is concept-driven (or at least has a distinct and characteristic theme or style), Kojima approaches each installment in the Metal Gear series with a new angle. Each game occurs in a distinct year and features a distinct plot.

Perhaps fans will not find each of these artists’ projects relatable, but both fearlessly produce their vision without giving too much consideration for what the masses might want. Their art is a true expression of their individuality.

In a meta sense, 808s & Solid Snake represents a similar attitude. Allen and Nghiem are producing the show because it is something that truly appeals to them. They hope that earnestness is apparent to guests who might or might not have a vested interest in both or either components.

“Kanye West is never boring — that’s the thing,” Allen said. “It’s like a 12-sided die; there’s just always something to look at and you never know what you’re going to get.”

Allen and Nghiem’s track record of success has helped produce a small core of dedicated art show fans, but most guests will be newcomers interested in the event’s theme. Nghiem said while there might not be a lot of overlap in fans of Metal Gear and Kanye West, that is part of the point.

“I don’t mind if they don’t like both or not,” Nghiem said, “because if you like one or the other and people from both sides show up, I think it would be a good mix of people.”

In addition to mixing creative and social circles, Nghiem also wants the art shows to inspire others in the community to put on unique events. The producing duo intentionally keeps the art series unbranded so no one comes to rely on it or feels like the void for creative shows has already been filled in the city.