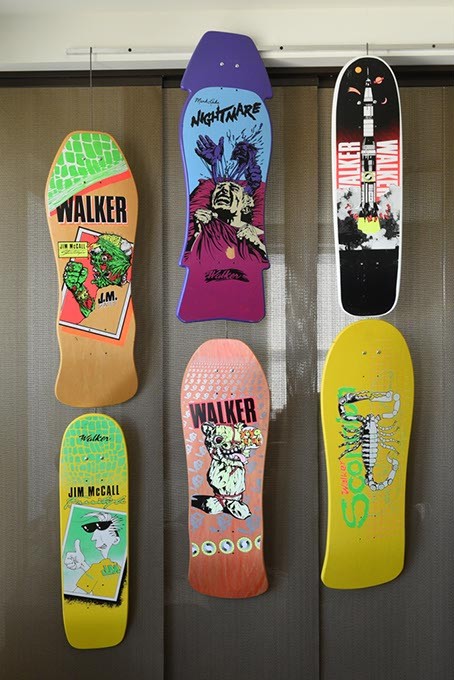 When designer Steven Walker talks about design, he sounds more like an engineer than an artist.

He uses words like “functional,” “balanced” and “quality,” words that rarely worm themselves into the flowery and cringe-worthy artist statements that litter the arts landscape. Combine that with the humble and workmanlike approach Walker takes to his own work and it becomes clear that he sees himself as more of a plumber than a Picasso.

“I don’t think art and design have any relationship,” said Walker, 60. “The passion is a different animal. In many ways, I think of design like architecture. It’s a functional endeavor. I love quality type; I love balanced layouts. It gives me a lot of joy, but it’s not art.”

When asked what the difference is, Walker boiled it down to one word: utility.

“With art, you can get passionate about something and it sort of directs itself,” he said. “It’s not something you sit down and plan. To me, art is something that comes out of your soul, and it’s dictated there. Design is a purposeful utility.”

Whether or not that’s true, each name on Walker’s long list of clients apparently value his approach. Oklahoma Today magazine’s art director since 1992, Walker also serves as a go-to guy for the Oklahoma Department of Tourism and Recreation, Water4, and Sector 9 skateboards. It’s a client list as distinguished as it is diverse, and Walker credits his Army brat upbringing with his ability to please folks from the boardroom to the halfpipe.

“I went to 11 different schools between kindergarten and my senior year,” Walker said. “It’s akin to being a traveling gypsy, basically. I’ve lived around the world, from Bangkok to Hawaii to Germany to Baltimore.”

“When I lived in Hawaii is when I first remember skateboarding,” he said. “That was about 1964, ’65. I was probably only 8 or 9 years old, but I remember my older brothers getting into it. It’s whatever they did when the surf wasn’t up.”

One brother in particular, Bruce, turned his boyhood hobby into a full-fledged, grown-up career, and little brother Steven came along for the ride.

“Bruce never let it go. He became one of the first skateboarding owner/manufacturers in the country, and he’s been manufacturing surf and skateboards for longer than just about anybody,” Walker said. “When I started college, he had pro riders already, and he started sending me work for them. So I basically started doing skateboard design for my brother and have done it ever since.”

Walker piled up numerous awards over the years, including being named Folio magazine’s 2015 Designer of the Year. However, when asked about his accomplishments, Walker sounds like a consummate team player.

“I see myself as nothing more than a conduit for putting a lot of really great talent on a page,” Walker said. “The Folio award is pretty meaningful to me, but it speaks more about the magazine as a whole and all the people that I work with. I rely on good writers, good photographers, good illustrators, and then I put the pieces together into a combination that works. Awards are great, but they speak to all the people who were involved.

“To be honest, I view the editors and writers as the creative directors. My job is just to take their creations and make them look good.”

However, when asked what he might like to add next to an already-successful, decades-long career, Walker sounds like a man who is able to reflect on his accomplishments and enjoy them.

“I love what I do,” he said. “I don’t really see anything changing. At the age of 60, my career seems to be as strong as it’s ever been. I enjoy working with the clients I’ve worked with over the past 30 years, and I don’t plan on retiring anytime soon.”

Print headline: Rolling in, Designer Steven Walker’s varied and fast-moving career started while skateboarding with his brother in Hawaii.