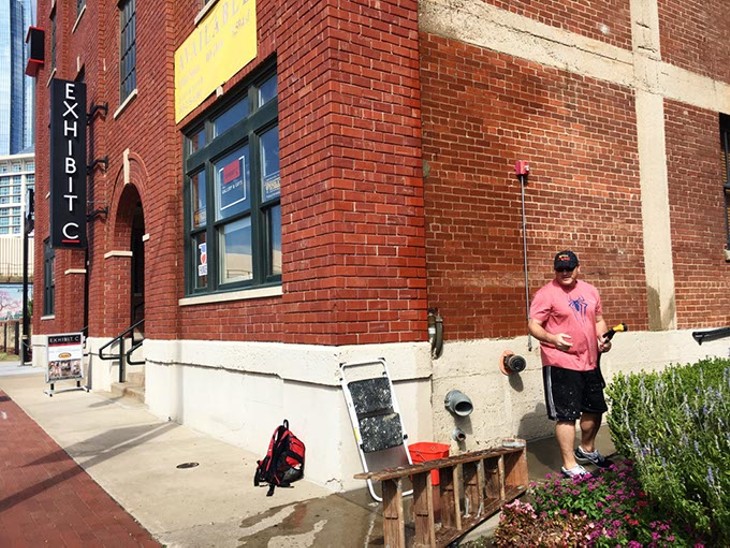 It might not look like much now, but when California-based artist Eric Tippeconnic returns to the state to complete his mural on Sheridan Avenue in Bricktown, he will transform what is currently just a red patch of paint into another piece of the increasingly vibrant Oklahoma City artscape.

Tippeconnic — a Comanche artist and history professor at California State University, Fullerton — is in the process of painting a 17-foot-tall, 10-foot-wide mural on the east wall of Exhibit C art gallery, 1 E. Sheridan Ave. Painting began in September, when the artist cleaned and primed the wall and laid down an initial coat of paint. Tippeconnic will return the second weekend in November to complete his work.

The mural is titled “Ready for Battle” and will depict horse-riding Comanche warriors wearing modern-day business suits. The artist said he hopes the project further illustrates how Native Americans are not still the stereotypical figures of the past that many people nationally understand them to be.

“I wanted to paint some pieces that are celebrating the fact that we are still here,” Tippeconnic said. “We’re alive and we’re thriving. We’re struggling in many cases, but we’re thriving as well and we’re not living in teepees anymore. We’re living in the modern world and we’re doctors and lawyers and, in my case, professors.”

Tippeconnic might be from California, but he is no stranger to the Sooner State. His father is originally from Oklahoma, and he has many siblings, cousins and other relatives who still live here. Tippeconnic’s art can also be seen in the 16th Street Plaza District gallery Kasum Contemporary Fine Art, 1706 NW 16th St. He was selected by Exhibit C to complete the mural after responding to the gallery’s open call to Native artists.

This is not the first mural project with which Exhibit C has associated itself. In May 2016, a team of Native artists including Rhiana Deck, J. Nicole Hatfield, Steven Grounds and Chad Nish Earles completed two murals in the E. Sheridan Avenue underpass near Chesapeake Energy Arena and N. E.K. Gaylord Boulevard, just feet from Tippeconnic’s new piece.

The artist’s mural is reflective of the style seen in much of his other work. His themes primarily revolve around depicting traditional scenes in very modern ways.

“Colors and movement, for me, are the metaphor for living, breathing cultures,” he said.

Tippeconnic said his message is not that the Native people are evolving away from their traditions. They are changing with the times, just as everyone does. They are not stagnant.

“We’re adapting as people, as we always have, to the world that we live in,” he said.

Tippeconnic’s father is a full-blooded Native American with Comanche and Cherokee heritage. His mother, however, is from Copenhagen, Denmark.

Though he grew up in California, Tippeconnic alternated summers between visiting his dad’s side of the family in Oklahoma and his mother’s family in the Danish capital.

The unique upbringing gave him a deeper perspective on Native and American cultures than most others. It is a perspective that still shows up in his art today, which is always culturally relevant.

This is Tippeconnic’s first mural in Oklahoma. He might not be a resident of the state, but the artist feels a deep connection with the place, one that far predates this commission.

“It’s what I do consider home,” he said. “Even though it’s not where I lay my head most nights, it’s what I consider home. So this is all the more special to me because of that.”

In addition to his work on the Exhibit C mural and as a college professor in California, Tippeconnic is represented by galleries in Texas, Arizona and California and spends a lot of his personal time traveling between them.

It seems like a lot to balance, but Tippeconnic said it is a lifestyle with which he is comfortable.

“I don’t watch TV,” he said. “I have four kids, and basically my life is my kids, my art and my teaching.”

Tippeconnic said the opportunity to leave a long-lasting impression on the city’s art culture and thought is not lost on him. He said cultures around the world have long put the messages that were appropriate to them at the time up on their walls as art. Oklahoma City is no different.

“I’m so honored,” he said. “I still have to pinch myself to realize that it’s real and to have this piece up for at least 10 years is so important. I’m a historian, and one of the things I know society marks their living spaces with — we call it a culturescape.”

Tippeconnic said he hopes people come out to see him work when he returns to finish the mural in November. He also said the people of OKC should be proud of the mural culture that is sprouting in the city.

“All you have to do is stand there in Bricktown where the [Exhibit C] mural is going up, take a couple of steps to the left and see them everywhere,” he said. “They’re beautiful.”

Keep updated on the mural’s progress at facebook.com/exhibitcgallery.