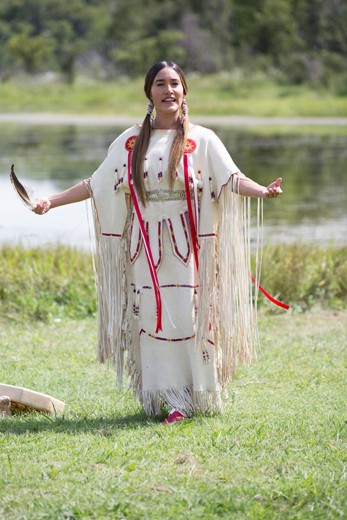 During a stately garden party scene in the new historical bio-pic Te Ata, guests including soon-to-be first lady Eleanor Roosevelt watch spellbound as the film’s namesake tells a traditional Native American story, and then a lady in the audience asks if what they’re doing is illegal. Given the government’s policies at that time, her concerns aren’t invalid. The film, which recounts the early life of famed Chickasaw storyteller Mary Thompson Fisher — better known by her stage name Te Ata — is set in the early part of the 20th century when the Code of Indian Offenses, first established in the 1880s to dissuade Native Americans from participating in traditional ceremonies and religious rites, was still law.

“It was during a time when federal government was discouraging that type of activity among native people in hopes that their federal Indian policies of assimilation would take root,” said Jeannie Barbour, creative director of the Chickasaw Nation’s Department of Communications and the film’s content producer responsible for much of the historical research. “The idea was to assimilate native people into American society. So [Te Ata] was actually performing at a time when it was being discouraged.”

Despite the real threat of legal consequences, Te Ata, whose stage name came from the M?ori expression meaning “bearer of morning,” toured the United States giving performances that included traditional stories, songs and dances of the Chickasaw and other Native American tribes. A feature film based on her life and produced by the Chickasaw Nation opened last month in several locations across the state and will screen nationally this month in a limited run in select theaters. Fisher — born in Emet in 1895, raised in Tishomingo and inducted into the Oklahoma Hall of Fame in 1957 — lived to be nearly 100 years old, but the film focuses on her formative years, from her childhood through her performance for the Roosevelts at the White House and her marriage to American Museum of Natural History curator and Hayden Planetarium head Dr. George Clyde Fisher in 1933.

“She did so much during her long life, and she was so active in so many different things having to do with Indian affairs and performance and the arts,” Barbour said, “so we decided we would take a portion of her life because there was no way we could fit her entire life in one movie.”

Te Ata’s singular performance style combined traditional Native American stories, songs and dances with classical theatrical training acquired at the Oklahoma College for Women (now the University of Science and Arts of Oklahoma). Q’orianka Kilcher, an actress, singer and humanitarian activist who portrayed Pocahontas in Terrence Malick’s The New World and Kerrianne Telford on Sons of Anarchy, was able to draw from her own background as well as interviews with Te Ata’s family in preparation for playing the storyteller onscreen. Kilcher, who has been acting since the age of 6, said she was immediately impressed with Te Ata’s skill as a performer after watching her appearance in the 1971 documentary God’s Drum.

“When she performed, no matter if it was in a living room or onstage, it was something very powerful and she had something to say,” Kilcher said.

This quality led Te Ata’s professor Francis Densmore Davis to encourage her student to perform dramatic interpretations of traditional Native American stories after hearing her tell them to classmates. 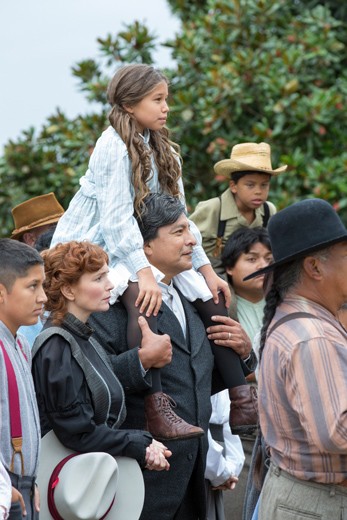 Cindy Pickett (Ferris Bueller’s Day Off, St. Elsewhere), the Sand Springs-born actress who plays Davis, said that portraying Te Ata’s mentor was “something that came very naturally” because she has also worked as an acting teacher. Pickett said, from her perspective, the relationship between Te Ata and Davis is best exemplified in a brief scene where the professor helps her student learn controlled dance movements.

“Sometimes, as an actor, it’s the small moments that mean something to you and come across on screen,” Pickett said, “and that was something that was, for me, a private kind of place.”

Davis also encouraged Te Ata to perform for ladies clubs and on Chautauqua tours, which brought musicians, dancers and other classical artists to rural parts of America that rarely had access to such performances. Performing on these tours also put Te Ata in contact with other Native Americans with stories of their own they asked her to share.

“She collected just reams and reams of paper with stories written on them — handwritten, or she had a little red typewriter that she also would type them out on, but she saved them all,” Barbour said.

Te Ata’s family donated many of those stories, along with “literally thousands and thousands” of other artifacts from Te Ata’s life, to the Chickasaw Nation, which is also producing a documentary on the storyteller’s life, Barbour said. 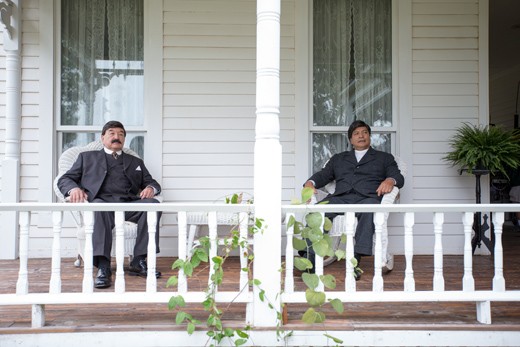 “We wanted to capture who she was as a person as well as her performance life,” Barbour said. “We feel like we’ve captured her fairly closely, and her family has seen the film and they love it, so I feel like we have a winner.”

“It was an incredible collaboration of a bunch of really, really, really interesting and talented people that were attempting to tell the true story in a truthful way that you wouldn’t necessarily see coming out of Hollywood, say, 20, 50, 70 years ago.”

Te Ata’s story might be new to many audiences, but the tale is timeless. In a scene early in the film, Davis, advising her students on the qualities that define truly great performers, tells them: “Charm can deceive, beauty will fade, but a woman with conviction will last forever.”