A coalition is reassessing how the state treats low-level offenders 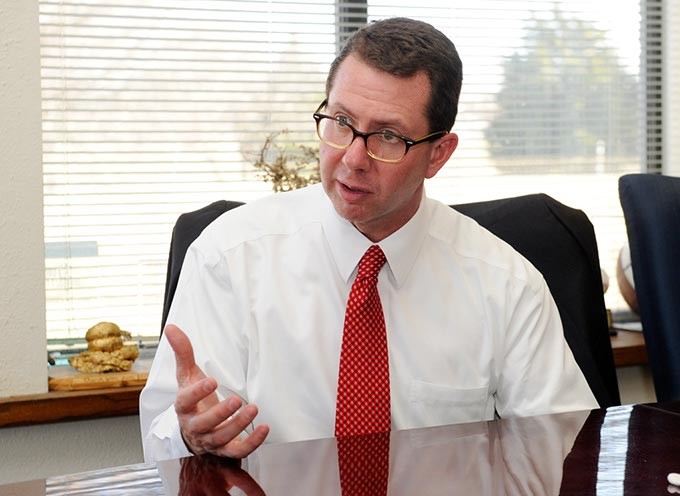 During her recent State of the State address, Gov. Mary Fallin called for an overhaul on how Oklahoma treats low-level offenders. To highlight the harsh reality of the state’s tough-on-crime approach, Fallin raised the issue of a stolen cellphone.

“A teen who steals someone’s smartphone today could be branded for life as a felon because smartphones cost more than $500,” Fallin said while surrounded by state leaders ready to start the 2016 Legislative session.

Does the punishment fit the crime? Currently, an 18-year-old high school student who pilfers an iPhone from a locker faces a maximum sentence of five years in prison. Research supports that a felony conviction can become a lifelong stumbling block for obtaining higher education, employment and housing.

Fallin called for increasing the threshold for felony property crimes from $500 to $1,000. Additionally, the two-term Republican governor wants to lower the state’s mandatory drug possession sentences and give district attorneys discretion to file first-time drug offenses as misdemeanors. Her recommendation to lawmakers came on the advice of a 40-member task force of law enforcement professionals.

The proposal would prevent thousands of Oklahomans from becoming felons and would keep families together that are otherwise ripped apart due to incarceration, Fallin said. After applause from both Republican and Democratic lawmakers, Fallin continued.

“State prisons are at 119-percent capacity. We just can’t keep doing what we’ve been doing. It’s not working,” she said.

Fallin joins a chorus of Oklahomans calling for criminal justice reform. A year ago, former lawmaker Kris Steele began meeting with business, community and faith leaders from across the state to discuss rehabilitation efforts over incarceration for certain minor offenses.

“What we know needs to happen is that we need to have significant sentencing reform,” said Steele, who served as House speaker from 2010 to 2012 before becoming executive director of The Education and Employment Ministry (TEEM). “We need to differentiate between the person that is truly dangerous and poses a threat to public safety versus the person that does not pose a threat … and could be better served through treatment, mental health care or supervision in the community.”

Through a ballot initiative, Oklahomans for Criminal Justice seeks to reduce the number of people sent to prison. Dollars saved from incarceration are redirected to help low-level offenders through programs that address root causes of crimes.

Recently, the two ballot initiatives were submitted to the Secretary of State in hopes that Oklahoma voters will have the chance to decide criminal justice reform.

The second proposal, State Question 781, creates the County Community Safety Investment Fund for county leaders to implement criminal justice reform, which could include rehabilitation services like drug and mental health treatment, job training and education programs. The funds could be directed toward Oklahoma’s drug and mental health court programs, which divert certain nonviolent offenders from prison to court-supervised treatment.

If the petitions are formatted as required by law, the 90-day circulation period can begin. During those 90 days, registered voters can sign the two petitions. The coalition needs around 86,000 signatures to appear on the Nov. 8 ballot, the same ballot for the presidential election.

Studies show that Oklahoma incarcerates women more than any other state and has the second-highest overall incarceration rate in the country.

At ReMerge, staff work with mothers in a diversion program providing an alternative to incarceration.

Supporters believe passage of the two state questions would allow more Oklahomans to receive treatment and reduce rates of recidivism.

“It creates a whole new perspective for society to look at the social problem of addiction, how to reframe it and handle it in a different light,” Gaddis said. “Incarceration hasn’t had any positive effects for the problem. … [The reform] can provide treatment instead of [incarceration], which doesn’t work.”

If implemented, the coalition affirms less taxpayer dollars would be needed, as fewer low-level offenders would be sent to county jails and state prisons.

“We can reduce our prison population,” Steele said. “We can make better use of taxpayer dollars because treatment doesn’t cost as much as incarceration. Most importantly, we can achieve better results.”

Oklahomans for Criminal Justice and the governor aren’t alone in developing solutions for the swelling prison population.

Rep. Travis Dunlap, R-Bartlesville, proposed new criteria for expungement of convictions for nonviolent offenders and misdemeanors. Under House Bill 2397, records would be expunged after five years instead of 10.

In Oklahoma County, the Greater Oklahoma City Chamber of Commerce leads a task force to review the criminal justice system and examine problems in the county jail.

Steele said it’s a very different criminal justice conversation now than when he began examining practices as a lawmaker in 2000. He said state and local efforts complement each other.

“There is no silver bullet in solving this issue, and there are several pieces of the puzzle that need to be addressed,” Steele said. “I truly believe the ballot initiative has the ability to complement policy changes in the Legislature and any efforts made by any county.”