A conversation invites the community to explore the powerful message behind Kehinde Wiley: A New Republic. 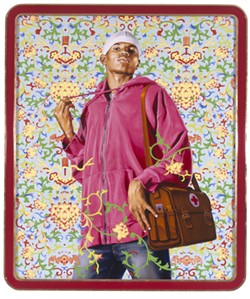 Bryon Chambers, Oklahoma City Museum of Art’s manager of adult learning, isn’t a fan of stereotypical lecture-based tours in which curators usher visitors from one work to the next.

He refers to them as “brag and drag” tours.

Chambers said the emotional and provocative exhibition of Kehinde Wiley: A New Republic was the perfect opportunity for the museum to expand beyond traditional tours to community-involved discussions for the first time.

“There are very real issues that are themes in the exhibitions that we encounter in our daily lives, especially if you’re a person of color and with all of differences in gender expression and socioeconomic class,” Chambers said.

The museum’s second One Work, Many Voices discussion is 6 p.m. Aug. 24 at OKCMOA, 415 Couch Drive. Michael Owens, community development director at the Alliance for the Economic Development of Oklahoma City, and Mandy Messina, an OKCMOA teaching artist, will spur the discussion.

Messina, who is a native of South Africa and moved to the United States in 2012, said the discussion series is in stark contrast to events typically held at museums.

“Asking a community to come together around one work and then seeing what everyone thinks about it is something I haven’t seen in a lot of museums, particularly in this area of the U.S,” Messina said. “It is pushing boundaries.”

Messina is an interdisciplinary artist favoring concepts over specific mediums. Just as Wiley’s works range from massive oil paintings to stained glass, Messina has used embroidery and performance-based art to showcase her vision.

She said she interprets much of Wiley’s work as smashing through stereotypes. She is most intrigued by Wiley’s Rumors of War series, which repurposes portraits of Napoleon, the Duke of Lerma and other canonical models on horses with young African-American men.

“It ties back to monuments in South Africa where we still have a lot of colonial statues,” Messina said. “A lot of white culture is borrowing from cultures of color. Wiley appropriating white canon is him holding up a mirror, saying, ‘I heard you like appropriation. How about this?’”

The Aug. 24 conversation follows a July event that Chambers said produced “a lot of transformation and emotional experiences.”

“We want our museum to be for all people,” Chambers said.  “This exhibition not only shines light on our own institution, but the art world globally. What is represented in these sacred objects we call art?

“[Wiley] takes an old medium and broadens it to the fullness of humanity. This program will continue [after Wiley] because there’s so much interpretation and meaning I want the viewers to experience. That’s when art becomes sacred and has meaning.”

Chambers said he asks those in attendance for the conversation to ask for permission before quoting another person, citing the mantra “Stories stay; lessons leave.”

“The first [One Work, Many Voices] made me realize that Wiley’s work has a much more pertinent effect on people,” Messina said. “There were so many personal experiences of what each work meant to a diverse group of people. I had never seen anything like it at another museum at which I have attended or worked.”

The exhibit runs at OKCMOA through Sept. 10, and OKC is the final stop on a seven-city tour. Chambers said that when the exhibit was booked over three years ago, he couldn’t have envisioned the political climate to which it has arrived.

“I think the emotional temperature has been exaggerated so much because of police brutality, the escalation of identity politics,” Chambers said. “We need this type of conversation in a public forum now more than ever. It was so refreshing to have that space where we could come together, share personal experiences, learn from one another and tackle some really difficult topics.”

During the time between booking and exhibit arrival, Wiley’s own star has risen. He has been hailed by The New York Times as “one of the most celebrated painters of his generation,” and his work has been featured heavily on the hit television series Empire.

“His prominence has exploded as the tour has made it way across the country,” Chambers said. “It really is the star of the lining that the OKC Museum of Art is its last and final venue.”

Entry to the One Work, Many Voices conversation is $5 or free for museum members. Visit okcmoa.com.

Print headline: Talk it out, A conversation invites the community to explore the powerful message behind Kehinde Wiley: A New Republic.

One Work, Many Voices