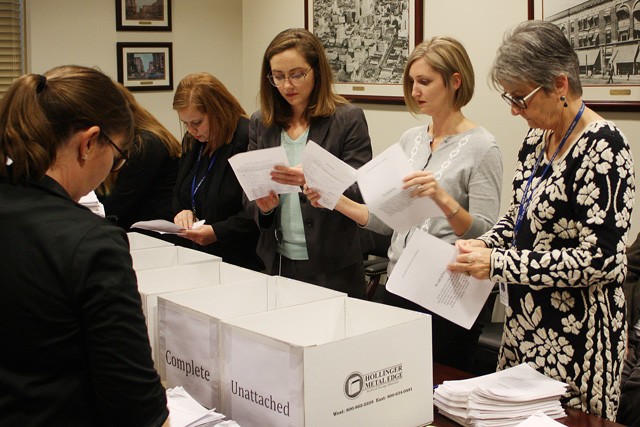 When Oklahoma City Ward 2 Councilman Ed Shadid and others involved in the grassroots coalition Save OKC Schools proclaimed their intent to circulate an initiative petition to temporarily address teacher pay in local schools back in August, what prompted their efforts was inaction from state leaders on raising teacher salaries.

Three months later, not much had changed.

Less than 24 hours after state House members failed to pass a budget bill to patch up a $215 million hole and provide a $3,000 pay increase for teachers, Shadid and other Save OKC Schools supporters lugged big suitcases containing thousands of petitions with more than 16,000 voter signatures into City Hall.

“We are asking, in the absence of a solution from the Legislature, that this be put to a vote of the people,” Shadid told reporters as representatives of Oklahoma City government began vetting the petitions.

In mid-August, Save OKC Schools launched its plan for a city income tax for education, known as Initiative Petition No. 37. The one-half percent temporary increase would bring around $50 million a year for local school districts and guarantees a pay stipend for teachers and support staff. If around 12,000 signatures are deemed valid by City Clerk Frances Kersey, Oklahoma City voters will be asked to vote on creating a city income tax to boost teacher pay in 25 school districts and charter schools that serve Oklahoma City students. The election could come sometime in spring 2018.

If approved by voters, Oklahoma Tax Commission would collect income tax on OKC residents who reside in the city for more than seven months. The city’s poorest residents would be excluded. As a temporary tax collected over a four-year period, Save OKC Schools estimates about $200 million would be distributed to local school coffers and ultimately placed in the hands of teachers.

According to Shadid and others behind Save OKC Schools, stipends are key to supporting local teachers, many who feel their profession is underappreciated and disrespected, evident by its low wages. In recent years, Oklahoma school districts have reported a mass exodus of teachers from the profession and to neighboring states. Now, those who skipped university preparations for teaching and earned emergency and alternative certification credentials from the state are teaching many Oklahoma students.

“We are clearly in crisis,” Shadid said, “and maybe in the beginning of the crisis.”

Save OKC Schools’ proposal is the first of its kind — a customized policy solution to fit the local environment.

In Oklahoma, public schools are primarily a state and local funding responsibility. Local school boards, not municipal governments, traditionally levy local taxes for their districts. The school boards are limited to ad valorem taxes, also known as property taxes, for general fund support and infrastructure. They cannot collect a local income tax or a sales tax, which limits school boards from raising funds for teacher salaries.

While municipalities and counties have levied sales taxes towards local school districts in the past, levying a city income tax is a brand-new concept in Oklahoma. Save OKC Schools leaders see an individual income tax on OKC residents as a progressive tax likely to gain favor with voters over a sales tax increase, which can place a greater burden on lower-income earners then it does on the wealthy.

Income tax is not new in Oklahoma. In fact, the Sooner State is one of many states to collect a state income tax. In early 2016, the state’s income bracket was cut from 5.25 percent to 5 percent as part of a tax cut passed by Oklahoma lawmakers intended to make the state more attractive to business. In recent years, Oklahoma has struggled to fill revenue shortfalls and passed along cuts to agencies. Some policy experts and lawmakers have pointed to repeated cuts to the state’s income tax during the 2000s as one of the culprits in Oklahoma’s budget woes.

Save OKC Schools presents its proposal as “rolling back income tax reductions” made at the state level.

While Save OKC Schools pushes a message of increasing teacher pay, its focus is on improving the city’s quality of life. Coalition leaders argue that there is an economic impact when it comes to improving primary and secondary education.

In the months to come, all eyes will be on this education proposal. If voters approve paying a little extra in taxes for bringing bonuses to teachers, other municipalities looking for education solutions could follow suit, Shadid said.

“We can’t have our path, our economic development and our city’s future tied to the Legislature, which continues to fail to act,” Shadid said. “It is time for another path.”

Print headline: Little Extra?; Save OKC Schools leaders say OKC voters should get ready to weigh in on an income tax to deliver stipends to teachers.

Gist of the proposition

Shall the Ordinance proposed by Initiative Petition Number 37 be approved?

Shall it be approved?