Competition reality show RuPaul’s Drag Race has gained popularity in recent years, with its ninth season moving to VH1 from the smaller LOGO TV channel this past summer.

Many veterans of Drag Race are touring the country this holiday season to add a little flair and pizzazz to the average Christmas performance. On Nov. 15, Rose State College’s Hudiburg Chevrolet Center, 6420 SE 15th St., in Midwest City is the first stop on a 30-city tour for A Drag Queen Christmas.

“The girls that will be there are top-notch and they have big personalities, so it will be a big, eclectic and fun show,” said Trinity Taylor, host of A Drag Queen Christmas.

“Being on a mainstream television show, drag has gotten a lot more exposure,” Taylor said. “It’s not as taboo, weird or misunderstood as before. A majority of our fan base is young girls and their moms. It’s a great thing, not only for drag, but the LGBTQ community and acceptance in general.”

With Taylor serving has the event’s master of ceremonies, each performer will have two opportunities to perform their own genre of drag, which ranges from comedy to “club kids,” the latter of which places an emphasis on flamboyant behavior and inventive costumes.

This is Taylor’s second tour with production company Murray & Peter Present and its second Christmas-themed show. Taylor said that each performer has created an original number, all of which will play up the Christmas aesthetic and holiday songs.

Taylor is a professional drag queen based in Orlando, Florida, and travels the country to perform, quite often at nightclubs. Many of the fans driving RuPaul’s Drag Race are not old enough to attend nightclubs, Taylor said.

“Drag Queen Christmas is a great opportunity to see a show and it not be in a nightclub setting so that they can get a better understanding of what drag is without the background noise of a nightclub,” Taylor said. 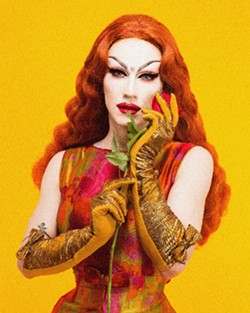 Birth of a Queen

Taylor, who was born Ryan Taylor, grew up in Springville, Alabama, a town so small that it didn’t even have a red light. Taylor dropped out of high school to care for her sick grandmother, who became her caretaker after the death of his mother when she was a child.

Taylor moved to Birmingham, Alabama, after her grandmother’s death. She was then introduced to the performance of drag at a small venue called The Quest Club.

“I started it as a dare when I was 18,” Taylor said. “I entered a contest and lost, but I kept coming back until I won, and I was hooked. I hadn’t spoken to anyone about how I felt about my grandmother’s passing. It was an outlet to express myself, but also, I didn’t think I was good at anything until I found drag. I was lost and didn’t know what I wanted to do with my life. It has molded me into the person I am today.”

Taylor’s stage name comes from the Carrie-Anne Moss character in the Matrix movie franchise. Taylor’s career has exploded since appearing on Drag Race, where she was known for pageantry skills and performance. She even received a shoutout during a Saturday Night Live sketch parody of Drag Race.

“I’ve been traveling so much that I don’t where I am and when,” Taylor said of her hectic schedule.