Four members of the family — Micah and his cousin Mark, plus Mark’s parents, John and Mary Lou — have art in their upcoming group show Mix of Six.

What do you do when you are a fantastically talented family of artists with some new art to show off? You put together one heck of a collection of art and invite some friends. The more the merrier, after all.

That’s exactly what the Moad family is doing. If the saying “The family that plays together stays together” is an indication of doing things correctly, the Moads could be its poster family.

“We’re kind of a talented family,” Micah Moad said. “If you’re not a musician or a visual artist or both, it’s odd in our family.”

He’s not kidding. Four members of the family — Micah and his cousin Mark, plus Mark’s parents, John and Mary Lou — have art in their upcoming group show Mix of Six.

They all work in various mediums, yet they somehow find the time to produce art while running their frame shop, Denton’s Picture Framing and Supplies, located at 3114 N. Classen Blvd.

John and Mary Lou purchased the shop in 1984 and, at Mary Lou’s suggestion, began painting seriously about 15 years ago. She, like Mark, works with art in her day job as an art therapist. Mark works as vice president of operations at Funnel Design Group. While he is one of the family members who uses his art degree to make a living, he also paints dog portraits on the side.

“It’s definitely the fun portion of his world,” Micah said.

Micah works in several mediums with regularity, including music. His contribution to the show will be mostly paintings with some mixed mediums.

“I do what the canvas tells me to,” he said. “I’ll start off creating something but not have a direction because sometimes, when I put a direction on it, it won’t turn out how I want.”

Growing up in the Moad family created a collaborative environment in which to cultivate their talents, with very little in the way of friction.

“There was never any competition; I think it’s more support,” Micah said. “It might be creative criticism, but it’s inspiring, encouraging.”

When Mary Lou suggested a group show, all were on board immediately.

“We’ve all been painting, and now we get to pick some of our favorites that are representative of us in a group,” Micah said.

They invited fellow artist Andrea Wijkowski and Joshua Webb, who together are Atlas Pine. The duo makes three-dimensional pieces and paintings.

Most members of the family work out of their homes, but they are also working on turning the space next to the frame shop into a studio — to be shared, of course. 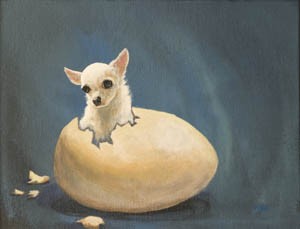