A game of conquests ends its run this weekend

There are a few key facts that you should know concerning Reduxion Theatre Company’s production of Les Liaisons Dangereuses, which ends its run this weekend at Broadway Theater: There is nudity, and there is French aristocratic debauchery.

Originally an epistolary novel (a narrative carried through nested documents like letters) by Pierre Choderlos de Laclos staged by the Royal Shakespeare Company in 1985, Les Liaisons is an account of two bored and sadistic aristocrats and ex-lovers engaged in a game of manipulation and seduction. The lead characters, La Marquise de Merteuil (played by Kris Schinske) and Le Vicomte de Valmont (Matthew Ellis), exchange sexual conquests and social maneuvers in an attempt to one-up the other’s displays of cunning and control. Their rivalry ensnares an assortment of other characters, positioning them as pawns in their cruel game.

The power balance between the blasé aristocrats and tertiary characters rather recalls the gods/men dynamic of Greek mythologies, wherein the highly positioned engage in irrelevant bouts with the lives of lesser mortals, resulting in pervasive hazard. But, of course, in narratives recounting such reckless games of human malevolence, even the aristocratic aren’t invulnerable. 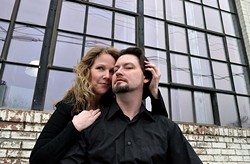 If you aren’t aware of its historical context as a precursor to the French Revolution, you might come away with the impression that the play is a misogynistic excursion of outdated and unabated gender stereotypes. The game sets a simple dynamic that none should divert from. Men must be brutish, hard set (get it?) sexual opportunists. Women are necessarily conniving and must ruthlessly weaponize their sexualities.

“Our sex has few enough advantages that we must make the most of what we have,” Merteuil states to “blossoming” young belle Cécile de Volanges after an uncomfortable and animalistic encounter.

It’s understandable if that’s a turnoff, but this is a racy comedy. To get over the nasty parts, the audience is called on to intellectualize the artistic intent, an objective complicated by the duplicitous nature of the narrative itself. If the audience can detach, it will see the truths of a work that subtly attacks institutions of sexual and social power in addition to failed processes of knowledge and emotional development.

Know this: The play’s satire is something that is only seen by those looking for it. Just as the characters themselves flit between appearing noble, debased, vulnerable, controlling or helpless, one moment will have you laughing and the next will tie your stomach in knots — and it’s all too easy to succumb to this perpetual ride without asking, ‘Why?’

Merteuil’s parting words cement the audience in this place of no catharsis, helplessly offering, “Our best course is to continue with the game.”

Print headline: The game, Obscured by a flurry of seduction and cruel intent, this French satire bears all but its message.