The first stop on a metrowide wing hunt should be Pizzeria Gusto, 2415 N. Walker Ave., where meaty chicken drummies are tossed with Gusto’s Sriracha hot sauce and served with a creamy Gorgonzola dressing.

Well, they used to be garbage. For years, chicken wings were the cuts of the bird that butchers gave away just to clear some space. Breasts and thighs — those were the real moneymakers.

Then, in 1964, Frank & Teressa’s Anchor Bar in Buffalo, New York, came up with a recipe for fried wings covered in butter and hot sauce. Ever since, the popularity of Buffalo wings has grown exponentially. What used to be garbage is now one of the most expensive parts of the chicken.

Oklahoma City is a long way from Buffalo, but that doesn’t mean our wing cravings can’t be met by local eateries.

The first stop on a metrowide wing hunt should be Pizzeria Gusto, 2415 N. Walker Ave., where meaty chicken drummies are tossed with Gusto’s Sriracha hot sauce and served with a creamy Gorgonzola dressing.

The secret, said owner Kathryn Mathis, is that Gusto’s chefs treat their wings like another fried favorite.

“We dredge the wings in a flour mixture and then fry them. It’s almost like blanching french fries,” she said. “We fry them and then let them rest, and then we fry them again. It makes them nice and crispy.”

She has experimented with Buffalo-style sauces at Big Truck Tacos, using a Cholula sauce for its Tuesday special. For Gusto, she wanted to keep the butter base, but switch to Sriracha, adding in basil and garlic to give it a more Italian flavor and then honey to sweeten. Finally, she uses balsamic vinegar for a late punch of brightness.

“And since we’re an Italian pizza place, we don’t have blue cheese, so we made a creamy Gorgonzola sauce,” she said. “A lot of people double up on that Gorgonzola sauce.”

For a different take on hot wings, you have to try the chicken lollipops at Guernsey Park, 2418 N. Guernsey Ave.

Executive chef Paul Langer credits the flavor to the all-night brine the restaurant uses for its “frenched” wings, a process that uses a whole chicken wing and pushes the meat onto one bone.

The goal is to create a “super umami” flavor on easy-to-eat wings dredged in rice flour and fried. The lollipops are paired with a Thai chili gastrique that hits sweet, savory and spicy buttons all at once.

The recipe he uses calls for pulling the knuckle off the wing and removing one of the bones, making for a single-pull wing that he said is extremely easy to eat.

The sauce at Upper Crust is an interesting hybrid of classic Frank’s RedHot mixed with barbecue sauce and a couple of other secret ingredients, making for a slow-building sweet heat that mounts quickly since the wings are so easy to eat.

An Oklahoma City classic, the wings at the big, red Bobo’s Chicken truck, 1812 NE 23rd St., are a must-try that will turn into a must-have.

Bobo’s wings are so addictive because of the truck’s late hours and because they smoke that tender mass of meat and bones all day before deep-frying. The result, topped with honey, is a sticky, sweet wing that can barely wait for you to pull it apart and dig in. 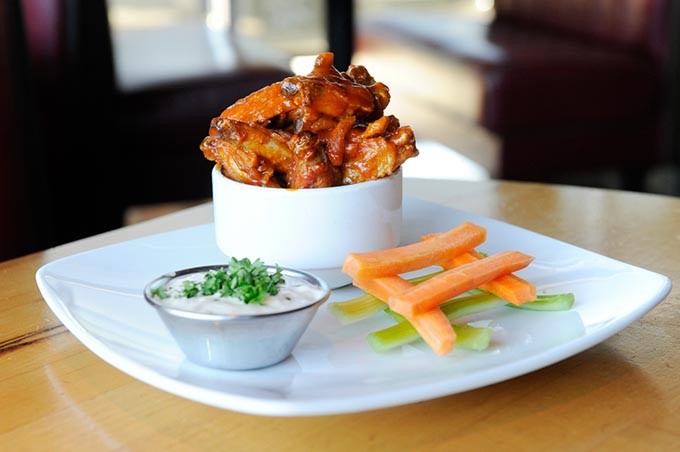 They aren’t wings, but if you leave Bobo’s without buying extra fried biscuits, there is no hope for you.

For a classic hot wing experience with a roster of flavors that can’t be beat, the winner is Wing Supreme, 3925 N. Lincoln Blvd.

Owner Eric Johnson’s restaurant is a relative newcomer to the area, but he has been cooking wings since 1989 — first in Norman and then in Washington, D.C.

Wing Supreme has quickly built a following with its wok-built sauces.

“What sets us apart from most places is that they just fry their wings and toss them in sauce,” he said. “That flavor’s just on the outside. We create our sauces in the wing as we cook it.”

That gives the wings a deep-down taste that lasts long after the last finger is licked. The Southern-fried wings have an almost catfish batterlike flavor, salty and seasoned, while the Honey Love wings start off sweet before turning to a glorious heat that tingles on the lips.

The wings themselves are a little smaller than you might find at the wing chains, but they are cooked to perfection and served fresh. That means wait a hot second — it’s worth a little extra time to save your mouth from the burn.

And if you’re just looking for a great Buffalo sauce, Wing Supreme has those too. It’s more proof that you don’t have to be anywhere near New York to find chefs who can turn what used to be the butcher’s garbage into spicy, addictive gold.