Pryor is the stage for back-to-back festivals this September, including the return of Rocklahoma and the inaugural Born and Raised Festival. 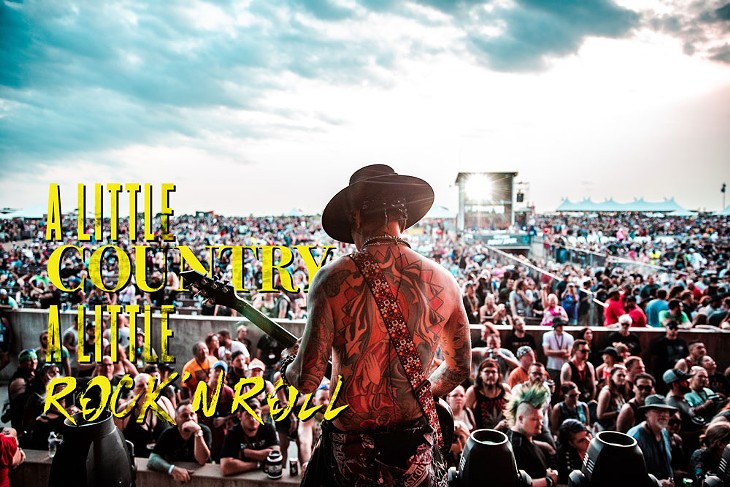 Eastern Oklahoma is set to be a musical mecca throughout September for rock and country fans as they converge for the return of Rocklahoma over Labor Day weekend and for a new festival just a few weeks later.

Running from Friday through Sunday, with a special pre-party on Thursday, Rocklahoma is returning for its 14th year after being canceled last year as the first wave of the COVID-19 pandemic spread across the country.

Steven Rohall, event promoter and marketing director for AEG Presents, said the festival is gearing up to be bigger and better than ever as they’ve implemented new features and conveniences for festival goers and brought in headliners who have never played the festival before.

“First and foremost, people are coming for the music and second, the experience. If you’ve ever been to Rocklahoma you know that we try to provide a great customer experience. We try to listen to our fans and really make adjustments to make it a better experience. For instance, this year parking is included in everyone’s pass, nobody has to buy it on top,” Rohall said.

Many of the bands scheduled to perform across three stages over the three-day festival are coming for their first appearance, which is by design as Rohall said it’s important that music lovers are exposed to new talent.

“We try to bring not just the heavy hitters, but also some up-and-coming bands that you may or may not know yet and will hopefully be big in a couple of years. A festival is a great place to discover new music. We want to make sure that we’re providing that to people,” Rohall said. “And then there are favorites, who we try to have come back every couple of years, that are fans tell us ‘Oh, man, we loved so and so band,’ and we make sure they come back.”

Festival producers take that fan input seriously as each attendee is sent a survey to see who they would like to see perform for the next festival.

“We don’t beat around the bush. Tell us who you want to see,” Rohall said.

Each day, the music starts at 11 a.m. and continues to midnight, but Rohall said it’s not uncommon for festival-goers to keep the party going until 3 a.m.

For those who have yet to make the trip to Pryor, Rohall said it’s a special event filled with people from every state in the country and even those from across the globe. It’s not uncommon for people to wander from campsite to campsite where they are offered a beer, some food and good company, Rohall said.

“It’s a very friendly crowd and it’s really welcoming. For the most part people just want to be next to people who are going to rock out with them and not judge them for listening to rock music. They’re unapologetically themselves,” he said.

For those looking to camp out over the weekend, the festival has a few options to increase the comfort level at or around your campsite, including private restroom rentals.

“In the campgrounds we have shower houses, plenty of shower houses around for folks. We have port-a-potties. People can actually also rent their own port-a-potties for their camp. So, if you want a private port-a-potty and lock it up so nobody else can use it, you can absolutely do that,” Rohall said. “People will bring pools and get those filled up so they can sit and relax at their campsite. You’ll drive through and you’ll see someone sitting in there with a Bud Light wave and say hello. It’s great.”

Over the past few years, event staff have worked to beef up food and drink offerings during the festival, which means a variety of beer and drink options and better food options.

We’re also very cognizant of prices as well. We have one area of the festival, called the Roadhouse, and in the Roadhouse, you can get a $5 beer, which is unheard of for a concert,” Rohall said.

Festival planners are also going cashless this year, which is designed for the safety and convenience of festival-goers and to allow for speedier transactions. Those without a debit or credit card can convert their cash to a pre-paid Visa card on-site, which is accepted at all vendors and merchandise stands at the festival.

Planners also strongly encourage those planning on attending to be vaccinated for COVID-19 or seek a negative test result prior to arriving on the festival grounds to ensure the safety of all those attending.

If metal and hard rock aren’t your thing, just wait a few weeks and check out the Born and Raised Festival, which Rohall described as an outlaw and red dirt country music festival.

“It’s brand new. 2020 was supposed to be its first year, but obviously that didn’t happen,” Rohall said. “There is a pre-party on Friday the 17th. And then on the 18th and 19th are full days. The 18th headliner is ZZ Top, the 19th is Cody Jinks. It’s a stacked lineup if you’re into that music.”

Rohall said a number of performers legendary to the scene are also scheduled to play, including Robert Earl Keen, the Randy Rogers Band and Lucinda Williams, but they’re also giving time for those just coming up.

“We have folks like Corey Kent and Jason Scott Band, who you might have never heard of because they’re just now up and coming. We’re excited to lean into the Born and Raised concept,” Rohall said. “I think the coolest story on this one, for me personally, is Zach Bryan. He’s from 10 minutes down the road, he’s active-duty military, he’s only played two or three shows. We’ve got him slotted on Friday and Sunday. He’s a local kid and I think he’s going to end up doing big things. My uncle calls him ‘porch sitting, whiskey drinking music.’”

The event is also set to feature barbecue curated by pitmaster Wayne Mueller, of the world-famous Louie Mueller Barbecue restaurant in Tyler, Texas, and a special opportunity to see bands up-close and personal with a VIP ticket.

“We’re doing some really cool stuff in VIP as well for that. We’ll have a lot of these artists come in and do unplugged sessions. Essentially, you’ll see them on the main stage or the second stage and then you’ll go to VIP and instead of being around 15,000 people, you’ll be with 800 to 1,500 and get like this private, intimate unplugged session from Jack Ingram, or Jamie Lin Wilson or Wade Bowen. It’s going to be really cool in there,” Rohall said.

Like Rocklahoma, festival planners encourage attendees to be vaccinated or to have received a negative test result for COVID-19. The event is also cashless.