To most, life seemed picture-perfect for Pam and her husband Matt. They had a nice group of friends and plenty of money, were well-respected in their social circle and lived in a comfortable Nichols Hills home.

But Pam and Matt (their names have been changed to protect Pam’s identity) were hiding a secret. Domestic abuse was tearing apart their family. The couple were married for more than five years, and after a series of family struggles, Pam said that’s when the abuse started.

“There were always times when he talked ugly, but it doesn’t really stand out in my mind until after that family crisis,” she recently told Oklahoma Gazette. “Then it happened all the time. … The verbal abuse was almost daily; the physical abuse would be about once every couple of months.”

Domestic abuse can take many forms — physical, verbal, emotional, sexual — and it can happen in any ZIP code.

“For me, the verbal and emotional abuse was way worse than the physical,” Pam said. “But today, if I see someone walking a little too close, I will sometimes still duck out of the way.”

He often gaslighted Pam, she said, manipulating her into questioning her own feelings, judgment and sanity.

She coped by internalizing the abuse, and she often cried.

“I became a shell of my former self, so I don’t know if I would say I dealt with it well or I just dealt,” she said. “I even told myself that maybe if I would just do better … or maybe I actually deserved to get yelled at.”

When the couple went out with friends, she said, he was “fantastic.”

“But behind closed doors, he called me every filthy, disgusting name he could think of,” she said. “I swear his eyes went black. It was so scary.”

Finally, Pam said she had enough. She escaped to her parents’ house until she could save enough money to rent a small apartment. She left behind the swanky home, financial security and friends.

“You really find out who is there for you and who isn’t,” Pam explained. “No one really ever stepped up to take my side, so I decided I don’t want to know people like that.”

The past couple of years have been one huge journey, she said. The attorneys and legal fees have been a nightmare. But at the end of the day, she is in a good place.

“My point for sharing this story is that if someone is in this same situation, take that first step. Don’t wait. Jump,” she said. “Just get yourself out of the situation you’re in. I have had to swallow a lot of pride, but I am no longer put down or injured daily. I am free.” 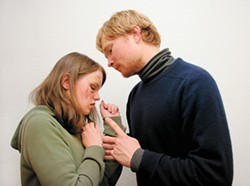 In 2014, Oklahoma ranked No. 6 nationally for its high number of women killed by men, Violence Policy Center data shows.

It also is a leading cause of homelessness for women and children, Mitchell said, with the potential to trigger multiple consequences, such as losing custody of the children to the abuser, child welfare involvement and employment challenges.

Most abusers do not start with physical assault, Mitchell said. In fact, some might never use physical violence at all, but danger can still exist.

“It is all about power and control,” she said. “It involves a pattern of manipulation, coercion and intimidation punctuated by verbal, emotional, financial, spiritual, sexual and physical abuse.”

The reasons for a perpetrator to engage in domestic abuse are many. Mitchell said it often is a learned behavior. Male children who witness the abuse of their mothers by their fathers are 50 percent more likely to become men who batter in adulthood, according to statistics provided by YWCA Oklahoma City.

Breaking the abuse cycle is difficult, but YWCA works to spotlight the causes, treatment and recovery from domestic violence.

“Since we are a national organization, we take the opportunity to bring awareness to this issue at the federal level so those in Congress know what Oklahomans are facing when they experience this crime,” Mitchell said. “We also do this at the state and local levels so our leaders have access to information about how rights and liberties are stripped away from victims by their partners and by the systems in place that fail to hold these perpetrators accountable.”

YWCA is foremost a stabilizing force for abuse survivors, providing emergency shelter, walking the journey with them, providing support services, accompanying them to appointments, offering a listening ear and even going with them to court.

“The first thing we tell people is to remember it is not your fault and there is nothing you can do to make the abuse stop,” Mitchell said. “If you are thinking about leaving, do not tell your partner, as this may increase your risk of experiencing violence or control.”

There are free, confidential services available for abuse survivors and their children. The YWCA hotline is available 24 hours a day to learn about those services or ask questions about their experiences.

While it might be a natural instinct for an outsider to tell a person to leave a harmful situation, it’s not often that easy to do. The abused person might still love their spouse or believe he or she will change.

“There are many challenges, barriers and cultural implications present when victims are put in positions to weigh the risks and benefits of leaving their partner,” Mitchell said. “Victims will leave when they are faced with no other solution and when the community makes it safe for them to do so. Victims are harshly judged, and they are too often held accountable for the abuse they experience.”

More often than not, Mitchell said, they rarely hear the situation got better. Most episodes of violence escalate in frequency and severity over time. She challenges everyone to ask, “What gives abusers the idea they have the right to abuse their partners?”

What is it about the community that allows domestic violence to exist?

“If someone tells you they are afraid of their partner or ex-partner, that they are being abused or controlled — believe them without judgment,” she said. “Let them know there is help and hope available and connect them with YWCA. I also encourage … [the community] to join us in our efforts to create safety for adult and child victims by giving your time, talents and monetary donations. If we want domestic violence to stop, it takes an investment from all of us.”

“It is extremely important that while our community faces economic challenges, we all work together to support survivors of domestic violence,” said Janet L. Peery, YWCA Oklahoma City CEO. “Purple Sash generates much-needed funds to help women, children and men heal from abuse while also giving them tools to design a new future free from violence.”

Billed as an “evening of elegance,” Purple Sash features dinner, a runway show presented by Ruth Meyers boutique and live and silent auctions.