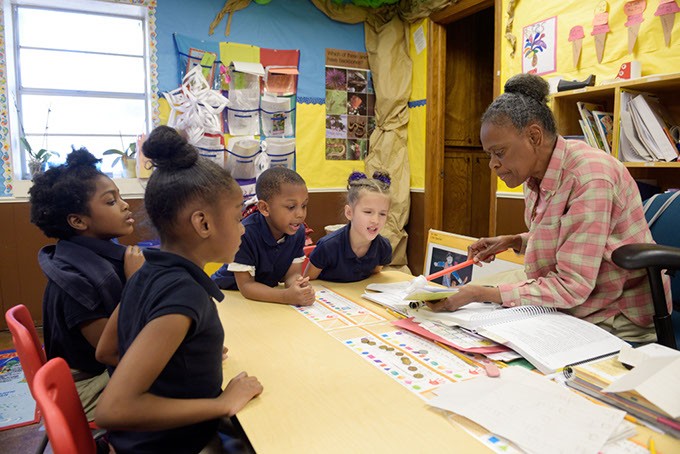 From the beginning, Robin Khoury envisioned a school where children of incarcerated parents would get the resources they needed to catch up academically and tackle the issues giving them such long odds at success in life.

Parental incarceration takes a toll on children, setting them up for a life of poverty and detrimental health issues.

Six children who had experienced the pains of a parent or both parents being imprisoned were the first to recite Little Light Christian School’s creed when the school opened for the 2012-13 academic year. The statement of the school’s beliefs encourages confidence and living one day at a time.

Five years after the school’s start, 28 students cherish the creed as the most important pronouncement of its kind. From inside the classrooms of Lone Star Baptist Church — which houses the private Christian school — students say aloud from memory their creed each day.

“I have great expectations for myself,” the students say in union. “I accept the challenge to become the best that I can be. Yesterday’s errors are behind me. Today’s successes are before me. I will make today the very best day of all.”

The creed illuminates Little Light’s mission to educate, empower and encourage children with incarcerated parents but also to break the intergenerational prison cycle.

“I want the very best for them,” Khoury told Oklahoma Gazette. “I know they can learn. If they learn how to communicate, get along with others and read well, they will be successful. We are building lifelong learners. … We know bad things have happened in their lives, but they have a future, and we will walk with them. They can take a different path and be the light in their families’ lives.”

An estimated 5.1 million children — a conservative estimate — in the United States have parents who have been in jail or prison at some point in their lives. In Oklahoma, 10 percent of children come from families where one or both parents face imprisonment, according to the  2016 A Shared Sentence report issued by Annie E. Casey Foundation child health and welfare organization.

“For children and families, incarceration is not a one-time event,” the report stated, “but a daily reality that lasts well beyond a jail sentence or prison term.”

A Shared Sentence, along with numerous other reports, have examined children of incarcerated parents and found they have a greater chance of experiencing physical and mental health issues, including anxiety and depression. Compared to their peers, their families are less likely to be financially stable, and many are raised in impoverished conditions, residing in poor-quality housing in troubled neighborhoods and attending low-performing schools. Carrying such circumstances into schools, they can develop behavioral problems in class, fall behind academically and later drop out.

Some studies seem to show that children with a mom, dad or both parents in prison are six times more likely than their peers to end up behind bars. Similarly, Alliance for Excellent Education research finds an indirect correlation between education and arrest and incarceration rates.

With a background in prison ministry, Khoury developed Little Light’s academic model to fill student-learning gaps and meet emotional needs. A majority of students arrive to Little Light grade levels behind academically. Their missed knowledge is attributed to a variety of reasons, including truancy, long-term suspensions based on behavior problems and limited learning experiences in their early years of development.

With an individualized academic model, coupled with mentorship, counseling and support for students and families, the school’s seven teachers meet the needs of their students, who range in age from 6 to 13.

In addition to teaching the core subjects, the students engage in lessons on the Bible, art, music, life and coping skills.

When Little Light students hit an emotional point, Khoury and her staff don’t scold or punish.

“If a child’s behavior is accelerating, we call a code yellow,” said Khoury as she explained all teachers and staff carry two-way radios to communicate during the school day. “Someone will come and remove the child, giving them a chance to de-stress outside of the classroom. We also train our kids in communications skills. You will hear them say, ‘I need to take an anger break. I feel it, and I want to settle down.’”

The students of Little Light are the byproduct of Oklahoma’s past tough-on-crime approach to criminal justice. Everyone from lawmakers to faith leaders and community members have used words like “crisis” to describe the Sooner State’s overcrowded county jails and state prisons, along with its high rates of incarceration when compared to other parts of the country.

“When you incarcerate someone, there are social ramifications,” Khoury said. “We, as Oklahomans, need to think about Is the crime worth the other issues we are going to cause by taking this caregiver out of the home? Are there other ways to correct behavior that are not as expensive to taxpayers and don’t cause social problems?”

With current statistics, like one in 10 Oklahoma children coming from a home where a parent is incarcerated, there is an urgency to see the school grow.

“We want to reach more students,” Khoury said. “This is not even a drop in the bucket.”

Since the beginning, Khoury has envisioned Little Light’s expansion, adding more grade levels and moving into a larger facility in the coming years. Specifically, Khoury sees the school expanding into a preschool and growing its prekindergarten and kindergarten program.

Private donations fund Little Light, which operates as a faith-based, educational nonprofit. Children attend the school at no cost, arriving to find all school supplies, uniforms, coats and shoes provided for.

In December, Little Light introduced its Dream Builders Society, a fraternity of supporters who’ve pledged to give at least $1,000 each year over a five-year period. By year’s end, the school expects to see a $65,000 boost from the society.

The Dream Builders’ involvement goes beyond writing checks. Members are invited to the school periodically to interact with students through special programs, like February’s Black History Month celebration.

Khoury lists the Black History Month celebration as a shining moment in the school’s short history but can list many more.

“Anytime you are teaching a child to read and you hear them read their first words out loud, that’s a high-five moment,” Khoury said. “We have so many high-five moments over the course of a day.”

Beginning each day, taking a few minutes to say the creed, goes a long way to meeting the needs of children, those no longer on the path to incarceration.

Print headline: Making it, Facing slim chances of success in life, an Oklahoma City school works to reverse the odds for children with incarcerated parents.