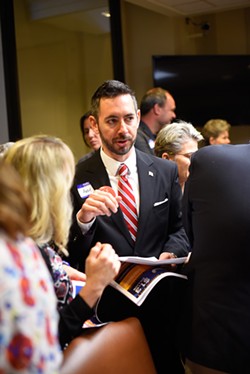 When Andy Moore met with Wheeler District director Ashley Terry about possibly screening an episode of The West Wing in her district as a way to promote civil engagement, he said the director was very receptive.

Some events just sound like they were meant to be.

The phrasing, combined with a chance to use the popular late-1990s-to-early-2000s political television drama as a way to get people thinking about government, was enough to sell all parties on the special presentation.

Moore, executive director of Let’s Fix This, said he plans to project The West Wing season one episode “The Crackpots and These Women” on the side of the dining-area pavilion.

After the screening, a panel of former White House staffers, including current state senator and Oklahoma City mayoral candidate David Holt, will speak about how the show relates and differs to reality in Washington, D.C.

At press time, Moore was still finalizing panel participants, but he said he has contacted former staffers from administrations as far back as Ronald Reagan and wants representation from Democrats and Republicans.

“It’s just to give people some insight into what life is like in Washington,” Moore said.

The hope is that the show’s appeal — which has held up over time, if not expanded in the era of streaming and binge-watching — will be a fun way to engage the public and get them thinking about political policy.

“The big purpose of Let’s Fix This is just to get regular folks involved in government, specifically in our state government and even at the city level,” Moore said.

The West Wing’s final episode aired May 2006 on NBC, but the series outlives its initial run due to award-winning storytelling and its still-relevant themes.

For the uninitiated, The West Wing is a drama that follows the fictional presidential administrations of Josiah “Jed” Bartlet (Martin Sheen) and later Matt Santos (Jimmy Smits).

While the show’s events and characters are fictitious, they often bear some similarity to real-world issues and figures.

Moore is a big fan of the show. He wears West Wing T-shirts and regularly listens to the popular West Wing Weekly podcast co-hosted by Hrishikesh Hirway and Joshua Malina.

Malina portrayed speechwriter and communications staff member Will Bailey in the series.

Despite his current zeal for the show, Moore said he began watching the TV drama in early 2016 after several of his friends continually suggested it.

“I binged for as much as I could with seven seasons of hourlong episodes,” he said. “I watched it all and really fell in love with it.”

Moore said part of what draws him into the show is that some of its themes are still pertinent years later. He mentioned topics like North Korea and dilemmas about what is proportionate international recourse.

To Moore, it is a sign that more creative approaches to some of these issues are needed.

“It’s interesting to think the show aired almost 20 years ago and there’s stuff that’s still relevant to today,” he said.

Moore said he would like the West Wing watch party to become a regular, recurring event but will gauge the success of the first one before making any long-term plans.

Let’s Fix This leadership is formulating its programming for the next year and hopes to blend some of its older, proven events with newer ideas. The group hosts regular events at the state capitol so concerned citizens can meet with lawmakers.

These conversations should not be partisan or fueled by animosity.

“That’s what Let’s Fix This is all about: helping everyday people get their voices and concerns heard and yet create opportunities for them to engage in their government in a meaningful way,” he said.

Moore hopes this event and others will help people walk away thinking their voice can really make a difference.

“The voices of everyday people do have an impact on those who make decisions on all levels of government,” he said. “We encourage everyone to speak up and reach out to form a relationship with their elected officials so that they can have their voice heard.”