A local woman made a business out of baby bottles

Oklahoma City mom Lisa Blacknoll-Hyche might have made the perfect baby bottle. Last year, the mother of three launched her company, LUX, which distributes a bottle featuring a silicone nipple she designed and developed. Her company was developed out of necessity five months after she gave birth to her youngest child, Myles.

Though Blacknoll-Hyche was no stranger to baby products as a mother of three, she spent her days working in the aerospace industry and was a little worried about returning to work and breastfeeding after Myles was born.

“I am a proposal manager, which means for the last 12 years, I have been all about airplanes,” she said. “I knew I was going to have to go back to work fairly quickly, and although Myles had latched immediately and was nursing fine, as a mom, I wanted him to continue to have the comfort of a mom even when using a bottle. I worried that he wouldn’t take a bottle. If he wouldn’t, then how would I run between his childcare and my office several times a day while I continued to breastfeed?” Blacknoll-Hyche said.

When an infant latches properly, he or she draws the nipple all the way to the soft palate, which creates a seal between the baby’s mouth and the mom’s breast. The seal allows milk to be ingested and blocks out air, which reduces or eliminates colic and allows the baby to fill up on milk. A correct latch also enables a mother’s milk to flow more easily.

Another important benefit of breastfeeding is that mom and baby experience skin-to-skin contact, which helps calm baby and mom but also aids in helping baby’s mental development and sleep habits and can even stabilize a premature baby’s heart rate and breathing, according to parenting website Today’s Parent.

“The LUX nipple is soft and has a wider base, or areola, which is very soft and feels like skin. Other nipples are narrow, straight and rigid, which means the baby can’t latch and nurse naturally,” Blacknoll-Hyche said. “Our nipple is perfect; when a baby latches, the milk or formula shoots out without the child working, like a natural nipple works.” 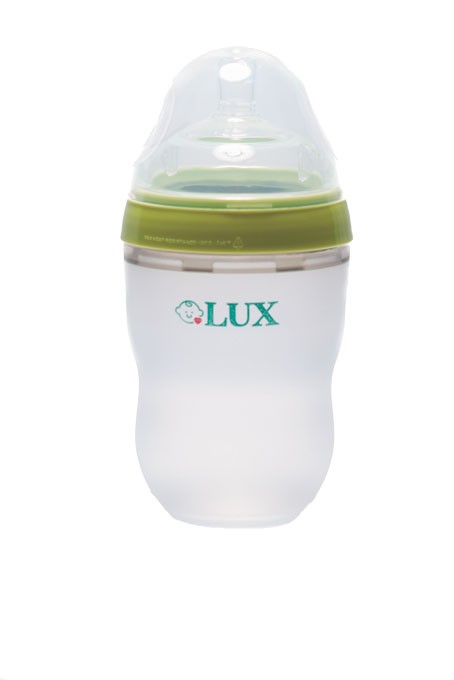 When the idea for LUX hit her, Hyche’s oldest child, Meciah, was sitting with her. She was worrying aloud about returning to work and had, at that point, tested lots of nipples. She’d found a bottle base that she loved, but the perfect nipple remained elusive.

“I looked at Meciah and I said, ‘Let’s make the perfect baby bottle,’” Blacknoll-Hyche said. “And he said, ‘Mom, you always have great ideas, but you never do them.’ I decided that day.”

Now all of her kids are involved. Myles was the chief bottle tester and Meciah helps with marketing and brand management and helped come up with the company’s name. Blacknoll-Hyche’s daughter London helps her mom deliver samples to shops and boutiques. Hyche’s husband helps foster the business by feeding Myles and, perhaps more importantly, washing bottles.

“We made the bottle base and nipple nice and wide, so even a man’s hand can fit inside them to wash them,” Blacknoll-Hyche said.

After her initial conversation with Meciah, Blacknoll-Hyche called the manufacturer of the bottle bases she liked and got to work. She learned that she could customize the nipples to her heart’s content and was elated.

“We have shipped samples all across the United States, and we have filled orders from all over the country, as far away as Hawaii, New York, California and Florida,” she said. “I get letters and emails from parents who are thrilled to see their babies latch immediately and eat.”

LUX plans to branch into other products in the future, but for now, the bottles and nipples, available in two sizes and several colors, are available on amazon.com and luxbabybottle.com.

Print headline: LUX idea; A local woman made a business out of baby bottles when faced with the difficulties of returning to work and continuing breastfeeding her baby.