Rosebeary’s Bakery officially opened in July at the Shoppes at Northpark.

Somewhere at the back of Janet Rosebeary’s mind, she always had the thought of opening her own bakery.

But as a creature of habit and someone afraid of change, the likelihood of growing a hobby-turned-home business into a standalone store seemed light-years away.

That is until a car crash provided an opening.

“We all said this was a blessing in disguise,” Rosebeary said. “It was an answered prayer.”

It wasn’t the physical destruction from the single-car accident Feb. 7, 2016, that plowed into The Wedding Boutique on May Avenue, a venue used by local businesses as a place to meet clients. Instead, the subsequent actions from a stranger in an SUV gave Rosebeary a reason to expand on the custom cakes and cupcakes she had perfected for two decades.

She stepped out of her comfort zone in September 2016 with initial plans. By December, she and her family found a location at Shoppes at Northpark, culminating with a soft opening of Rosebeary’s Bakery in June and a ribbon-cutting ceremony in July.

“I knew it was going to be a lot of work, and it scared me. But I love it,” Rosebeary said. “I thought I would get sick of it. Now I get to bake again, I have that passion back that I totally forgot I have.”

The charming shop located near a high-foot-traffic area is the perfect size for a start-up.

Seating for a handful of customers and a display case for baked goods occupy the front, leaving space in the rear for baking, decorating and a meeting room with customers. It’s an upgrade from the pint-sized 400 square-foot commercial kitchen attached to Rosebeary’s house in Guthrie.

Upon entry, a lime green theme catches the eye from a leftover design by CherryBerry Yogurt Bar, the previous retail shop that occupied the space.

The color scheme is part of Rosebeary’s personality, starting in 1997 when she entered baking competitions.

“I was known throughout the circuit for wearing that color. I love that color,” she joked.

A former retail manager in Texas, Rosebeary and her husband, Jeff, moved to Oklahoma in the late 1990s. He worked in retail, and she stayed home to raise a family until the day she picked up a cake-decorating book at the Guthrie library.

Rosebeary always had a sweet tooth, with baking interests blooming when she was 13 years old, but it started “out of sheer boredom.”

Her first cake, the head of Big Bird from the PBS show Sesame Street, didn’t go as planned when she decided to experiment for her 1-year-old daughter’s birthday. Big Bird’s eye melted off when she failed to cool the cake down.

“It wasn’t a pretty first birthday picture,” she said, laughing.

Undeterred, she made cakes for church members and eventually entered a gingerbread house in the Oklahoma State Fair. She won, and it took off from there.

She stayed local for years before hitting the road for wedding cake competitions in Virginia, where she won grand champion for her design, and Maryland.

“I said if I ever won grand champion I was going to quit,” said Rosebeary, who estimated she competed in five or six events a year for the better part of a decade. 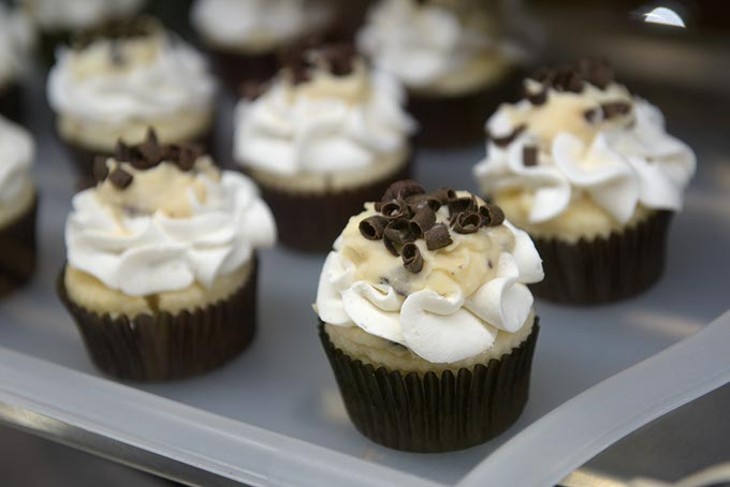 Around 2011, a transition from the road to a more laid-back lifestyle as a mother and home baker would seem to produce a less stressful environment.

“I’m kind of one of those people that likes the high from it. It’s sad. You have your junkies that jump off things, and this is probably mine,” she said. “I will put something off until the last minute so that way I have to rush around to be stressed out and hovering over it. It’s insane, but I love the pressure.”

The pressure comes from meeting deadlines and producing eye-catching designs that please the taste buds — all from scratch.

Rosebeary bakes from memory. Everything is done by taste and texture. There are no recipes.

“None. Not a single one,” she said proudly.

She is detail-oriented. She once spent 16 hours designing a Boone Pickens Stadium wedding cake for diehard Oklahoma State University fans.

On all three occasions, she was clueless about her customers’ fame.

“It blows my mind because it’s like, ‘Me? Really?’” she said. “It’s just surreal. It’s exciting and then stressful because you pray they like everything.”

Rosebeary starts wedding cake prep Thursday and Friday. Her busy work is earlier in the week — 12-hour workdays are the norm — when she bakes everything from cookies and lemon bars to cannoli for the display case.

“The cases help pay the payroll, and we make our money off the custom cakes,” said Bethany Schneeberger, Rosebeary’s second-oldest daughter, who manages the bakery.

They also help tap into Rosebeary’s creative side. Each week produces something different, like the brownies she made with leftover cheesecake batter earlier this month.

All in the family

Every Saturday, there’s a good chance you’ll find the entire Rosebeary clan — husband Jeff and daughters Heather, Bethany, Myndi and Amanda — in the bakery. On weekdays, Rosebeary works in the back, sometimes with help from Amanda, while Schneeberger manages the front with Myndi. Heather, the oldest of the four, creates truffle cakes for the display case and helps with cakes when she’s not teaching dance classes. Jeff, who is a software engineer, assists in the store and with deliveries on weekends.

Rosebeary pushed her children to “do their own thing” growing up, but their paths led to the bakery.

“She’s always been known as the ‘cake lady,’” Schneeberger said.

Yet she’s still mom to those close to her, a personality that spills over to the business side. The goofy charm and motherly tendencies helped Rosebeary serve 168 weddings two years ago, and it’s not uncommon for the bakery to turn custom orders away since they are so busy.

“It’s her personality accompanied with how amazing her work is. It’s that to a T,” Schneeberger said. “Whenever she meets with brides, that’s the first thing they say.”