You’d be hard-pressed to find many Oklahomans who can claim a former U.S. president has commissioned their work, but Jackie Wilson beats those odds.

The founder and owner of Wilson Rocking Horses creates one-of-a-kind heirloom pieces for new generations to enjoy. Recently featured on the master craftsman- and craftswoman-centered PBS documentary series A Craftsman’s Legacy, the Luther-based woodworker spoke to Oklahoma Gazette about her love for the craft.

“I’ve always loved horses — their grace, strength and beauty inspired me to sketch them from an early age,” she said. “I never imagined that I’d be working out of a woodshop because of my fascination with horses.”

Life never occurs how we envision it, but Wilson said her early years contributed to her woodworking skills.

“My dad had a woodshop in our basement, and he would always ask us to bring up tools from the shop,” Wilson said. “I naturally learned to use tools by helping my dad out with different house projects.”

Wilson grew up riding horses, but her hobby dwindled with time. Later, however, both her artistic proclivities and familiarity with the manual nature of woodworking culminated into a single project from a magazine.

“Back when I was pregnant with my daughter, I saw a step-by-step guide in Early American Life to creating a rocking horse,” Wilson said. “When I saw that article, I was so excited to create this for my child to enjoy. I never had any intention of making any others.”

Several years after her first creation, the Wilson family moved to a large plot of land in Oklahoma. She appreciated the extra space but felt uneasy about its lack of use.

“We acquired five acres of land, and our home was built on some of it,” she said. “I didn’t want the rest of the land to just sit there. I remembered I built a pretty sturdy rocking horse for my daughter, so I decided to build about five more.”

With that, she was ready to showcase her talents to the public. After featuring her rocking horses at the annual Edmond Arts Festival, all signals in her life pointed her toward continuing her craft.

“Even when I ignored my calling, I had dreams about creating rocking horses,” she said. “I knew this was my purpose.” 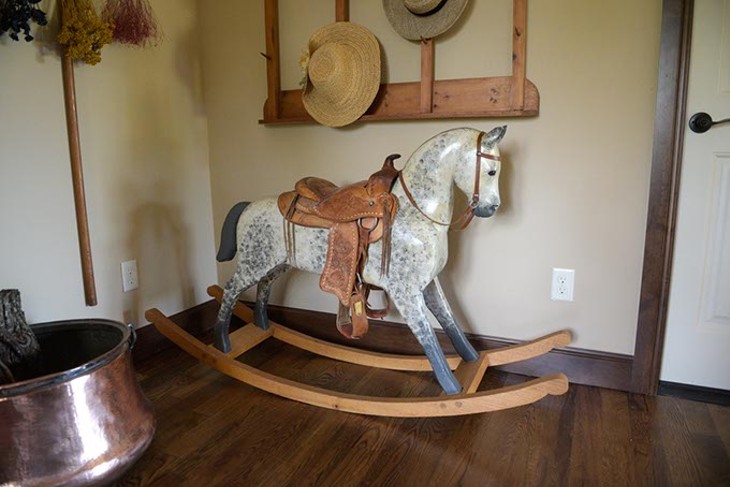 As of this year and most likely into the foreseeable future, Wilson Rocking Horses is one of few businesses in the U.S. that handcrafts the wooden pieces. Wilson admitted such a niche takes time and patience to cultivate.

“In 2012, after a year of trying to sell my pieces, I had to close my storefront in downtown Edmond,” she said. “It wasn’t the easiest time, but it was an opportunity to grow and gain knowledge from other woodworkers from the community.”

Sticking it out through the good and bad and recruiting a little marketing assistance eventually yielded Wilson’s distant connection to England’s royal family.

“I received a phone call from a woman saying she was with the State Department and that they were interested in my rocking horses for an undisclosed client,” she said. “I couldn’t tell anyone for the longest time!”

Wilson’s creation — a gift from President Barack Obama to Prince George (son of Prince William, Duke of Cambridge, and his wife, Duchess Catherine “Kate” Middleton) celebrating his birth in 2014 — was also featured in a 2014 exhibition at Buckingham Palace. Despite the international accolades, Wilson ultimately attributes her talents to a higher power.

“I believe God guided me to where I needed to be, which just happened to be inside of a woodshop,” she said. “Creating these objects gives me the most fulfillment. People have asked me how many rocking horses I work on simultaneously, but I’ve never thought to keep track of that. I’ve given away as many as I’ve sold.”

Print headline: Rocking solid, What began as a plan to build one rocking horse for her child has grown into an internationally shared love of a vintage classic.