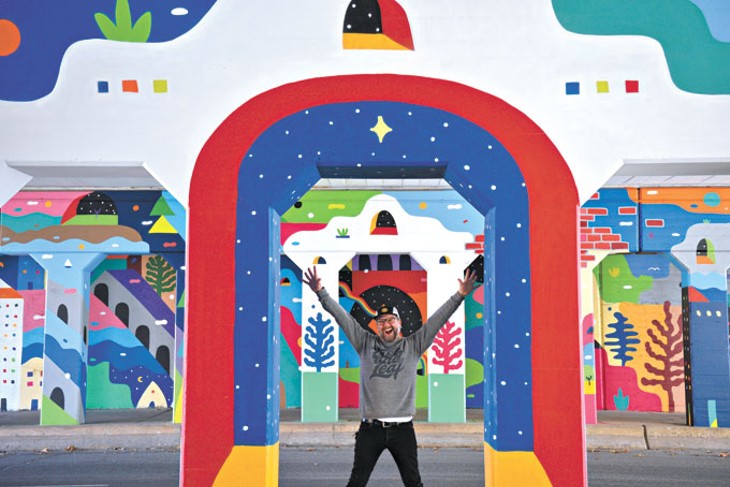 Adorned in a yellow safety vest, spray can in hand, when Kris Kanaly set out to add to his family’s art legacy that began almost a century ago, it happened one lane of traffic at a time.

Kanaly first put his own mark on Oklahoma City by establishing Plaza Walls, the curated rotating mural project in 16th Street Plaza District, but his mural “Abstract Passages” under the Santa Fe Railroad overpass on Main Street will have his most lasting impact.

Kanaly’s mural, for which an opening ceremony was held in early November, is another product of Downtown OKC Inc.’s Artist Invitational program, now in its third year. Kanaly was chosen by the organization after he wowed members with his unique artistic style that blends improvisation with abstract art.

“It’s a huge honor, and it’s the largest mural I’ve painted anywhere,” Kanaly said. “For it to be a monumental step in my career and done in the city that I was raised is a huge honor.”

His maternal great-grandfather founded Colonial Art Gallery in 1919 — it was handed down to his grandfather and served Oklahoma City for over 90 years.

“It’s what I was meant to do,” Kanaly said, noting that each of his parents was also involved in the arts.

“Abstract Passages” was devised during an initial pitch to Downtown OKC, but Kanaly’s style is improvisational. He begins each mural with a mock-up of a previous one and draws a series of squiggles, squares, rectangles and circles over it.

“I look at those and see a river there, a house here and a sun over there,” Kanaly said. “I start embellishing, and each little space becomes its own world.”

The mural goes from bright pink adobe homes and the mesas of southwestern Oklahoma to the Bricktown Canal water taxis with psychedelic rainbows and UFOs thrown in for good measure.

“We love the fluidity of Kris’ process and the hidden images that he added as the mural developed,” said Staci Sanger, director of marketing and placemaking at Downtown Oklahoma City, Inc. “He created a truly interactive piece of art in addition to adding color and beauty to what was previously an uninteresting underpass.” 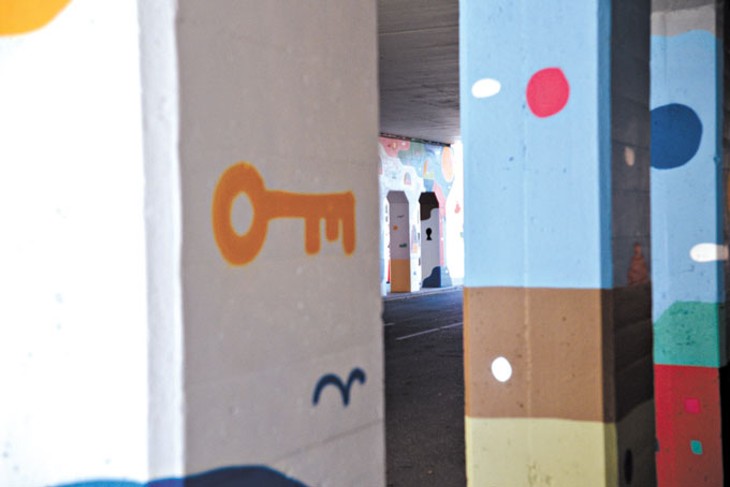 It has hidden Easter eggs both Oklahoma-centric, like thunderbolts in honor of the NBA’s Thunder and random keys with corresponding locks. Kanaly, relying on his graphic design background, built a corresponding website (abstractpassages.com) that includes a 13-item scavenger hunt for hidden items like a Bitcoin or Devon Tower.

There are other Oklahoma icons that are a little more obvious, like an outline of the state with a heart in the center, which Kanaly said is in honor of the “heartland.”

Bricks in honor of Bricktown also dot the mural, which covers the underpass on each side of traffic.

“It’s called ‘Abstract Passages’ because it’s a passageway to Bricktown and it’s abstract painting,” Kanaly said. “There is an overarching theme of adventure and travel. Someone described it as worlds that we all want to vacation in.”

The project took Kanaly and a crew of workers 25 days to complete. Kanaly is creative director at Staplegun advertising agency, and the firm not only gave him time to complete the mural but also sponsored the project and footed the bill for the 1,000 cans of spray paint needed to finish the project.

“We couldn’t be happier with how it all tuned out,” Sanger said. “It’s a striking piece of art, and it’s more than a thoroughfare now; it’s a destination.”

Downtown OKC Inc. is a nonprofit with a mission to combat community deterioration through public art. The Artist Invitational distributed $25,000 between three winners from central Oklahoma.

“Abstract Passages” will be on display for a minimum of five years.

“It’s had a great reception so far, so hopefully it’s around for decades,” Kanaly said.

The mural stands in stark juxtaposition to an Oklahoma centennial painting on the west side of the overpass’s wall that features the exact kind of images a tourist might expect from Oklahoma art.

“There are not trains or buffalo [in ‘Abstract Passages’],” Kanaly said. “For people visiting Oklahoma City for the first time, they see something that is very abstract and different. It’s great because it’s this big, colorful area, but it also has this weird concept with space portals were I try to break perceptions of Oklahoma art.”