“What we are dreaming up together is something akin to Warhol’s The Factory,” Battles said. “In my back office, I am setting up a recording studio where we will be developing young music artists, and when their projects are complete, we will promote them through more cerebral and artistic events throughout the month.”

Before joining SIG, Battles built a name for himself in music projects like Chrome Pony and Pink Pony, the latter a collaboration between himself and local artist and musician (and governor’s daughter) Christina Fallin.

“Since the end of April, I have been working day and night to build a coalition of young artists and older professionals alike,” Battles said.

SIG’s next big thing is The Shapes of Things to Come. Presented by SIG, Midtown Music and LineUpOKC, it focuses more on local talent and includes works from painter Neal Robinson, painter Michael Walters and digital artist Bryan Peace, along with local music. Works from ink and print artist Tiffany McKnight and digital artist Andy Seifried also will be on display. It opens with a free reception 5 p.m. Friday at SIG, located inside Carnegie Center at 131 Dean A. McGee Ave., Suite 135. 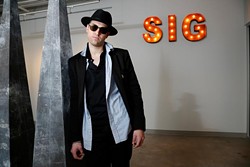 “We are excited to provide a music venue where the art is the focus,” Battles said. “We hear over and over that bands who take their work seriously are tired of playing in bars ... We want to create an atmosphere of focus and attention as well as relaxed enjoyment.”

As the space blends international and local art, Battles said a certain exclusivity is a necessity. In June, SIG becomes a “members only” club with monthly membership fees that will help fund exhibits and projects. June membership is $25 and will likely increase in July.

Exhibits will rotate monthly, and entry will be free with membership and by invitation on Fridays and Saturdays.

“We will also be doing a lot with fashion,” he said. “There are a lot of really cool and hardworking brands and labels making independent clothing or selling professionally curated vintage pieces.”

Wares will be sold during Saturday pop-up shops that run 4-7 p.m. and will be open to the public.