A decade ago, Hollywood brought to life the story of a couple of gay cowboys in the epic film Brokeback Mountain. Until then, the Western lifestyle of men who love men went largely unnoticed. And so did the subculture of gay rodeos.

Photographer Blake Little spent a number of years competing in the IGRA, and during that time, he always had his camera by his side.

“I went to my first gay rodeo in Los Angeles in 1988,” Little told Oklahoma Gazette. “I have always had an interest in rodeo, cowboys and Western culture. This first rodeo was a very powerful experience for me.”

During the next year, Little said he attended every rodeo in the IGRA’s Western Division and found the events to be very opening and welcoming.

“Even for a city guy from a place as urban as LA, the true camaraderie with the cowboys and the sport of rodeo drew me in,” he said. “At the sixth rodeo, I started riding steers, and by the end of the first year, I rode my first bull. For the next four years, from 1988 to 1992, I competed in the IGRA. And I won bull riding at the IGRA Finals Rodeo in 1990. During my time with the rodeo, I always had my camera and photographed at all the rodeos. Because I was competing, I had inside access to the rodeo contestants and behind the chutes. Since I was a fellow contestant, the cowboys knew and trusted me.”

The black-and-white images capture a slice of life not often seen in the traditional Western setting. The raw emotion in the photographs shows two cowboys sharing a victory kiss, one man helping tape the leg of an injured contestant and a bull rider sharing a moment with his kids after an event in Fort Worth. 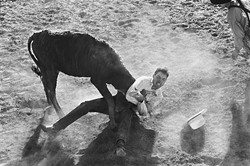 “The cowboys and cowgirls were almost always very open to being photographed,” Little said. “There were a few who did not want to be photographed for professional reasons. They were afraid of losing their jobs, and not everyone was out to all their family and friends. It was a different time.”

Little said his interest in photography began at a young age. He grew up in Seattle and attended the University of Washington. After three years, he transferred to Seattle Central College to study photography and soon discovered the camera was his true passion.

“I moved to Los Angeles in 1981, and that’s where I started my photography career,” he said. “One of my first commercial jobs was shooting Tom Cruise for Moviegoer magazine in 1985. That was a milestone shoot for me. After that shoot, I secured a representative and a stock photography agent. I have been working in LA for over 30 years now.” 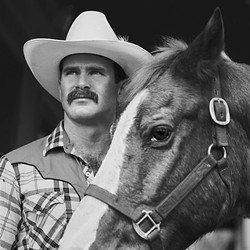 The new exhibit came about by accident around six years ago, Little said, when Los Angeles-based writer and historian Gregory Hinton contacted him.

“Gregory was starting a program called Out West, writing and researching gay Western history,” Little said. “He had remembered my rodeo photos from a newspaper article in 1990 and came to my house to see the photos. They were filed away in my archives, and I had not looked at them for 20 years.”

Hinton took a selection of the photos and presented them to the Eiteljorg Museum of American Indians and Western Art in Indianapolis, Indiana. They responded favorably, Little said, and offered to set up an exhibition. The photographs were first shown in Indianapolis in 2014, and since then, they have traveled to six museums and universities. 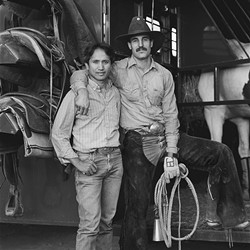 The Blake Little: Photographs from the Gay Rodeo exhibit is in the Melton Gallery in the Art and Design building on the campus of the University of Central Oklahoma, 100 N. University Drive, in Edmond. Hours are 10 a.m.-4 p.m. Monday-Thursday and by appointment Friday. It runs through June 20.

Many societal changes have occurred since Little began snapping photos back in 1988. Films like Brokeback Mountain gave moviegoers a look into the life of gay cowboys, and TV shows like Will and Grace helped bring LGBTQ issues into homes across America. Meanwhile, marriage equality is now the law of the land, and living out and proud is accepted more than it was in previous generations.

“When I was participating in the rodeos, it was a different time,” Little said. “Many of the cowboys faced discrimination, feared losing their jobs and some had their lives threatened. I never intended for the photos to make a statement about gays or gay rights. I was photographing part of my life: rodeo, the American sport and way of life that I loved. ... Most of American society has made a lot of progress. But we still need to make improvements. The current political climate is proof of that. I hope my photographs of gay rodeo can help bring society to a place of more equality for everyone. Rodeo is an American sport and a way of life. It is celebrated, lived and shared by people regardless of their sexuality.”

Print headline: Little snapshots, An exhibit by photographer Blake Little provides a glimpse into life in the gay rodeo.