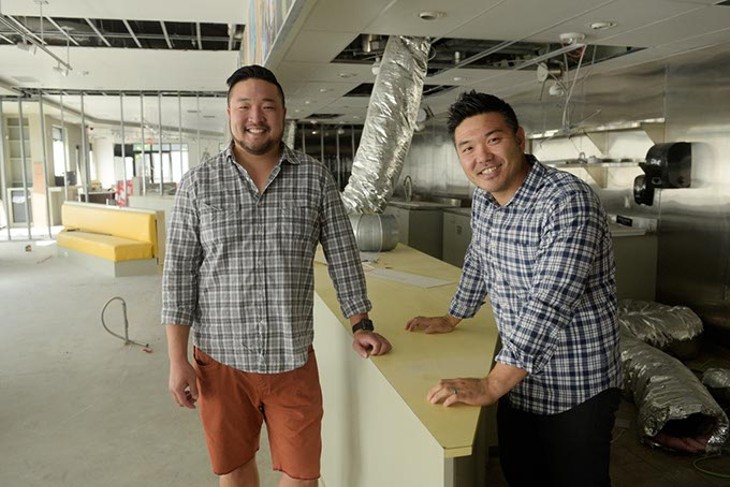 “I never understood how Japanese, Filipino and Thai cuisine got so far ahead of Korean food,” he said. “I think Korean food is so much more accessible and palate-friendly to Americans.”

Lee knows a bit about American palates. His run through Oklahoma City’s culinary scene started with short-lived restaurant Burger Rush, where he served fried soft-shell crab sandwiches, and wound its way through the Coach House’s apprenticeship program, earning him a job as executive sous chef at Vast, 333 W. Sheridan Ave. Along the way, he helped design the menu for Chae, 1933 NW 23rd St., a major milestone introducing Korean food to Oklahoma City.

“We just put the wall up, and [Organic Squeeze] gave us 500 more square feet, so it turned out perfect,” said Kevin Lee. “Now we have two doors instead of one, so one will be an exit and the other is the entrance. Now our lines won’t be snaking through the restaurant.”

There will be lines once Gogi Go begins serving. While Lee won’t be doing the day-to-day cooking, he has built a strong following in the local foodie community. Concepts with his stamp draw customers and good word of mouth.

The restaurant will be simple, in the style of a Korean Chipotle, he said. Diners choose the protein, the toppings and the delivery system and the counter staff puts it together.

Much like Chipotle, people can get chicken, pork or beef, but instead of Mexican flavors, they’ll be marinated in Korean spices and served over rice, on a salad or in a burrito.

“The flavors are really classic Korean flavors. It’s not like we’re taking Korean food and changing it into something else,” Lee said. “The variety of toppings and sauces are what make it really interesting.”

Sauces are not endemic to Korean cuisine, he said.

“Koreans are not the sauciest people in the world. They marinate and use banchan and pickles,” he said. “It’s about marination and fermentation.”

Banchan are the side dishes served with Korean food — little bowls and plates of different pickled foods, lettuce and vegetables — and they’re integral to the cuisine’s versatility.

“One thing you notice about Korean food is a lot of flavors are similar. Usually, it’s soy sauce or gochujang, which is Korean chili paste,” Lee said. “What makes it unique is the banchan. You have an option where every bite can be different. Order your main menu item and how you eat it with different sides makes it different.”

Banchan at Gogi Go will be toppings, and customers don’t need to worry about anything too wild. Lee said to expect the usual lettuce, avocado and different sauces as well as fried shallots and sauteed corn.

“Nothing crazy. Honestly, with this concept, we’re introducing people to Korean food,” he said.

But rather than a full-service Korean barbecue experience, in which diners cook their own meat, Gogi Go will have an open kitchen so customers can see the meat cooking on a flat-top.

As for Korean burritos, Lee said it’s about giving the people what they want.

“We’re in Oklahoma. People love burritos,” he said. “It’s as simple as adding tortilla to our stock. We’ll have kimchi-fried rice instead of Mexican rice.”

In addition to appealing to Korean food lovers, Gogi Go will serve dishes that accommodate vegans, vegetarians, those on a gluten-free diet and people who only eat halal-certified meat.

Though Korean restaurants have been in the metro for decades, Lee said Chae helped pave the way for a more modern approach to the cuisine. He said the biggest challenge to Korean cuisine’s proliferation has been the attitudes of Korean people.

Now, as second- and third-generation Korean-Americans are getting into the food scene, they’re helping soften that cultural resistance to change and making it easier for new diners to enjoy the cuisine.

“In California and New York, that change is already happening with a new generation of Korean chefs,” he said.

That’s not meant to insult Koreans. Lee is proud of his heritage; he just wants more people to enjoy it.

“When I designed Chae’s menu, Korean people were going in, saying, ‘This isn’t Korean food,’” he said. “Every cuisine borrows from each other. Korean people would ask why we put noodles in the oxtail soup, because in old-school Korean people’s mind, that’s not how it’s done.”

Lee dreams of eventually opening a full-service Korean barbecue. The groundwork he and his partners are laying with Gogi Go could help that dream come true sooner than later.

“I’m really hoping the concept does well. I think being in Midtown will help,” he said. “It’s constantly growing; we have great neighbors, like Waffle Champion, Louie’s [Grill & Bar] and Stella — a lot of local restaurants.”

Gogi Go could open as soon as October if construction and permitting goes well. But if it isn’t open in November, the owners will wait until January to begin serving customers.