In the 1950s, big skies and big changes to the country’s technological landscape spurred an artistic movement that began in the coasts and settled in the Southwest. 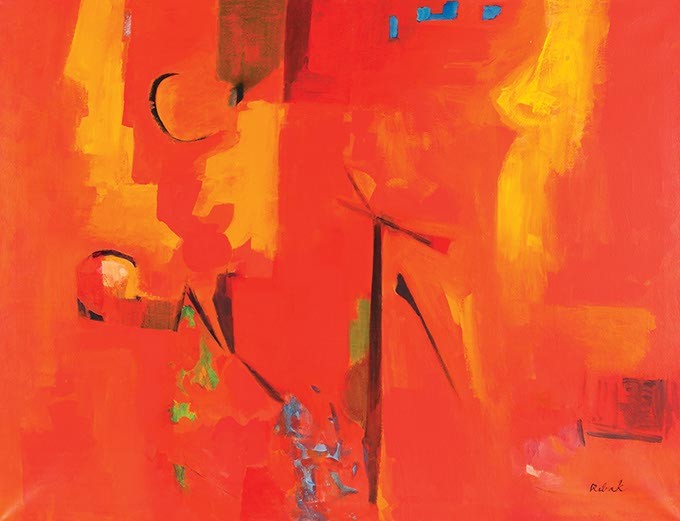 In the 1950s, big skies and big changes to the country’s technological landscape spurred an artistic movement that began in the coasts and settled in the Southwest. This movement is the focus of a new exhibit at the Fred Jones Jr. Museum of Art. The exhibit, Macrocosm/ Microcosm: Abstract Expressionism in the American Southwest, opens Thursday and runs through Jan. 4.

Mark White, Eugene B. Adkins senior curator and curator of collections at the Fred Jones Jr. Museum of Art, will kick off the exhibit with a lecture 7 p.m. Thursday at the museum.

“I’ll be discussing the spread of abstract expressionism to the Southwest,” White said, “specifically, how the Southwest became a crossroads between the New York school and the Bay Area.”

White said he will also discuss how this particular art form responded to the land and how through “exposure to the vast, open spaces of the Southwest, the vacancy of the sky and the silence, the artists were able to pull these salient qualities into their work.”

White said this cultural movement began with the return of American soldiers from World War II, many of whom took advantage of the G.I. Bill to further their artistic endeavors.

According to White, abstract expressionism was largely a response to the anxieties of the postwar period and the result was a very personal, introspective approach to painting.

“There’s a great deal of earnestness to the style,” White said. “Many of the artists believed that what they were doing was the honest, unfiltered response to the events of their day. They weren’t responding to popular taste or a common idea of what painting should be.”

White said that abstract expressionism is marked by bold use of color, spontaneity and experimentation with nontraditional painting tools.

“It’s a kind of exploration of the unknown, whether of nature itself or of the recesses of the unconscious mind,” White said. “There’s a lot to investigate in this movement and this exhibit.”

At its outset, the abstract expressionism movement found more acceptance on the East and West coasts than in the more conservative Southwest. New York artists also had the advantage of a more established artistic infrastructure and the support of major museums such as the Guggenheim and the Museum of Modern Art.

White said that in the case of Oklahoma, many of the practitioners of abstract expressionism returning to faculty positions gave the movement a foothold in the Southwest.

“They stayed in the Southwest even though they knew it would be a struggle, a more difficult existence,” White said.

White emphasized that even though the artistic movement found more initial resistance in Big Sky Country, the region played a vital role in the development of the art form. Major art galleries in Taos, New Mexico, and Amarillo, Texas, provided valuable support to artists in the region.

The technological boom that the U.S. experienced in the 1950s helped shape the artistic movement, and the Southwest was at the heart of those advances. The establishment of the Johnson Space Center in Houston and the atomic research taking place in Los Alamos, New Mexico, influenced artists in the Southwest. In fact, one of the paintings in this exhibit was commissioned as an advertisement for the Los Alamos research center.

White said that both the positive and negative aspects of these technological advances fueled abstract expressionism.

“The movement is really a response to the war and the atomic age — anxiety over what the future held,” White said. “But the movement also connects to the exploration and expansion of human realms. These artists were interested in terrestrial space as well as space above.”

White said that in the last five years, there has been a resurgence of interest in art of the 1950s and ’60s, in part because of the popularity of the TV show Mad Men.

“You see a lot of abstract paintings in that show,” he said. “I think it helps crystalize a broader interest that people may have in the 1950s.”

White said that museums and private collectors want to draw more critical and popular attention to this style of art.

“We want people to know how the Southwest engaged in important movements in the past century,” White said.

Admission to the Fred Jones Jr. Museum of Art is free and open to the general public.