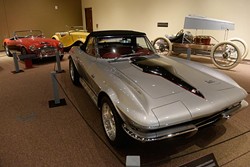 Aware of it or not, competition is hardwired into the DNA of almost every human being.

It is reflected in all manner of avenues, including but not limited to racing. The innate want to be faster than the next person ignites when toddlers take their seat behind the wheels of their first tricycle and carries on into adulthood once we get behind the wheel of a car.

The need to move fast is reflected throughout the 20th and 21st centuries in the evolution of racing cars, both abroad and on home soil. Oklahoma History Center aims to showcase this universal trait of humanity with its newest exhibit, The Art of Speed: Oklahomans and Fast Cars.

Steve Hawkins, the center’s director of marketing, referred to the exhibit as deputy director Jeff Briley’s baby. The idea was planted about a year ago, when Briley heard about a Grand Prix event potentially occurring in Oklahoma City. As planning for the racing event eventually fell apart, Briley assumed his idea for an exhibit centered around fast cars would also fade away.

“I kind of limped into the director’s office and said, ‘The Grand Prix thing is falling apart, so we’ll think up something else,’” Briley recalled. “He just looked at me and said, ‘Let’s do it anyway!’”

Upon receiving the proverbial green light, Briley and his staff immediately began work on contacting collectors across the state, asking if they would be willing to loan out the unique and, in some instances, one-of-a-kind vehicles from their private collections. 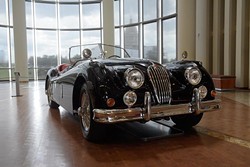 Briley elaborated on the sense of community and familiarity among the state’s gearheads as he was introduced to new contacts by way of his older ones.

“One of the extraordinary things about this whole exhibit is the willingness of the owners of these cars to share that with everybody,” he said.

The exhibit, which opened to the public July 1, is organized by era and showcases domestic and foreign cars dating from 1900 to modern day. It includes a Mercer, Pontiac, Chevrolet Corvette, Ferrari, Porsche, Jaguar and more.

Briley said Oklahoma is unique in how the landscape was directly affected by the rapid evolution of modes of transportation throughout over a century of existence.

“The idea that the landscape has so dramatically physically changed because of cars is really some that bears thought,” he said.

While the exhibit is open to the public, Briley noted the center will host a private, after-hours evening reception July 21 as a means of thanking key players for helping bring the exhibit together.

Selection of the 22 automobiles was strategic in nature in order to fit the overarching narrative of the exhibit. In multiple instances, Briley noted, “absolute, accidental serendipity” occurred as the ideal car presented itself. 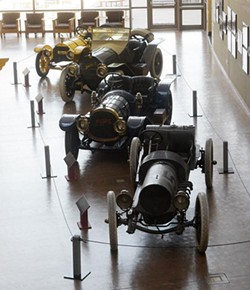 Walking through the exhibit, Briley said it becomes clear car races are not a new concept and their evolution coincided and even influenced that of automobiles themselves. What is widely described as the world’s first competitive motor race, the Paris-Rouen, took place in 1894, a little less than 10 years after the creation of the first automobiles.

From there, Briley said, racing quickly expanded beyond Europe and became a genuine worldwide phenomenon.

“Very early on, they were really interesting because a lot of them were not just races from point A to point B, but also showcases for endurance capabilities of a specific car,” Briley said. “You see a lot of these early car manufacturers, demonstrating that their car was dependable as well as speedy.”

Briley said the exhibit includes such a car: the 1911 Franklin Model D, which competed and won the 1912 Los Angeles-Phoenix desert race as driven by Ralph Hamlin and reached speeds of up to 75 miles per hour.

“Franklin’s approach to engineering a car was that they were air-cooled rather than water-cooled,” Briley explained, adding that it was unusual for the time. “You can imagine a desert race is the last place you want to have a car that you’re worried about overheating … so it was the perfect place to demonstrate the Franklin’s durability.”

Briley said the pre-WWI era vehicles included in the exhibit — which many might not automatically associate with racing — represent an early wide-open, creative period for automobile manufacturing.

“Every car company was feeling their way along, and there were very different approaches to building cars,” he said. “What these cars represent are different points of view of achieving the same thing.”

He noted that many of the races in which these early vehicles competed were particularly grueling on both vehicles and drivers.

“That was part of how car companies cut their teeth and proved the worth in their machines,” he said. 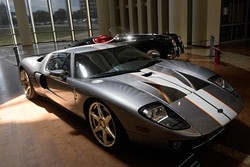 The exhibit tracks the evolution of race cars throughout an entire century via notable eras, including the post-WWII, European-influenced smaller racers as well as the rise of muscle cars in the 1960s. A muscle car of particular note is a 1966 Ford Mustang Shelby GT 350 designed and autographed by iconic automotive designer and racer Carroll Shelby.

Looking beyond American-made vehicles, Briley said the vehicle he might be most proud of in the exhibit originally hails from Spain and might not be immediately familiar to most visitors; he was unaware of it until meeting with its owner six months ago.

“It is truly art that sits on the ground with four wheels,” Briley said of the Pegaso Z-102 Berlinetta Series II by Sauotchik originally debuted at the 1954 Paris Motor Show.

He said only three still exist.

Briley described the vehicle as almost a mix of beauty and beast with its pristine, beautifully designed exterior combined with a monster of an engine under the hood.

“It’s really one of the ultimates in speed and style that anyone will ever see anywhere,” he said.

Editor's note: The online version of this story was updated July 18, 2017, to correct information about the private, after-hours event on July 21.

The Art of Speed: Oklahomans and Fast Cars