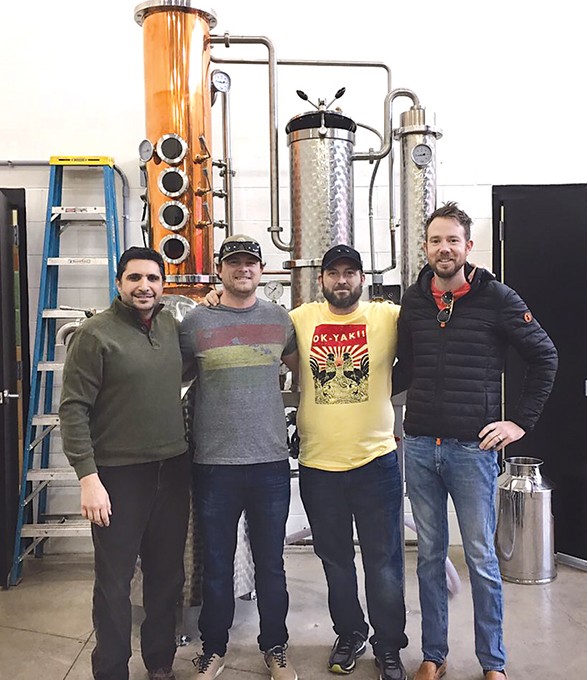 Since becoming Oklahoma’s first distillery in 2013, Prairie Wolf Spirits has earned national recognition for its vodka, gin and coffee liqueur while debuting a blended bourbon and rye whiskey in 2017.

A new ownership group comprised of chef Jonathon Stranger, brothers Drew and Erik Tekell and Steven Sands wants the brand to embrace its Oklahoma roots while expanding its footprint.

Prairie Wolf was founded by brothers David and Hunter Merritt, naming the distillery and gin brand after their farm in Loyal, which they have owned since the Land Run of 1889.

Famed American naturalist and painter John James Audubon invented the term “prairie wolf” when he saw a coyote. Without knowing what it was, the painter observed the coyote and coined the term. Audubon knew the Merritt family, and the family thought of the connection when it came time to name their company.

“It worked out that the Merritt brothers were running it, and now the Tekell brothers are,” said Drew Tekell, who will act as Prairie Wolf’s CEO while Erik Tekell serves as head distiller and plant manager. Stranger is managing creative and marketing.

The new management team closed on the Guthrie-based business in early February. It started as a conversation between Tekell and Stranger at their restaurant St. Mark’s Chop Room. Stranger asked Tekell — a sommelier — if he ever considered distilling his own alcohol.

“It was a dream and passion for me,” Tekell said.

Tekell reached out to Hunter Merritt to set up a meeting, intending it to serve as a blueprint for entering the business independently. During the meeting, Merritt said that Prairie Wolf’s success was taking the focus away from the family’s other company, The OKC Cellar, a temperature-controlled wine storage facility that also hosts events.

“We started working with the Merritt family, and it has been smooth and seamless,” Tekell said. “It’s an honor for us to continue what they started. We really do feel blessed to have this opportunity to expand the foundation they laid.”

The ownership group will unveil a new Prairie Wolf logo in April and has an Oklahoma-style rum scheduled for June release. Flavored with sorghum grown by the Seminole Nation in Wewoka, the product is a version of inland-style rum, as opposed to the island-style variety that uses sugar cane. It traces its roots in the United States back to the Revolutionary War, when molasses and sugar were so expensive that sorghum became the replacement, Tekell said.

“Being able to use local product in the rum to support the community and the tribe is important,” he said. “Whatever we can do to keep things local, we want to.”

Prairie Wolf will unveil its silver rum in June followed by spiced and aged versions in the coming months.

The Tekell brothers will work together developing new flavors. It’s something that gets Drew Tekell excited after years working as a sommelier and spirits expert.

“Being able to work with my brother is such a cool thing, being able to do a family thing. The brotherly thing means a whole lot,” he said. “As a sommelier, you’re always tasting, but getting in the craft and nerding out with the nuances of how yeast creates different flavors and getting really into the science has been a lot of fun.”

Tekell said that Prairie Wolf quality is one the things that attracted the group to the brand and said nothing has changed for its recipes that include a gold medal and 94 rating for Loyal Gin on tastings.com and a 93 rating and best buy classification for the coffee liqueur by Wine Enthusiast.

“[The Merritt family] had a lot of really good things working for them,” Tekell said.  “We want to continue on that legacy and turn it from a local thing into a global thing.”