A new restaurant brings a different kind of dining to Yukon 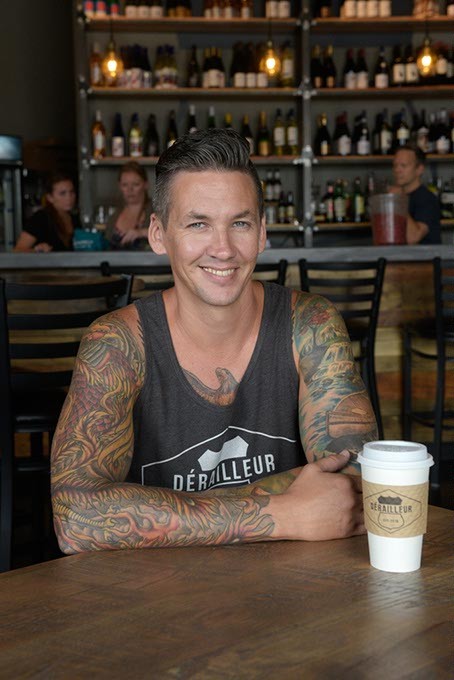 In bicycle terminology, dérailleurs are the devices that change gears when a rider shifts to control the amount of resistance. That mechanism is, ostensibly, the reason mountain bike racer Richie Bean named his Yukon restaurant Dérailleur, 10 W. Main St., Suite 100.

“One girl described us perfectly,” he said. “She talked about how the menu is always changing and how we’re always shifting gears.”

That’s not the real reason the new culinary destination got its name, but Bean said customers will have to come have a drink with him at the bar to learn that secret.

Bean came to Yukon as a teenager and found the city’s Main Street to be “a place where anything can happen.”

When he returned after serving in the U.S. Marine Corps, the area he loved had been abandoned.

“[Interstate] 40 by Garth Brooks Boulevard was built up, but Main Street was left to fend for itself,” he said. “We don’t even have a bowling alley anymore. That was one of the few places to hang out.”

Bean is a man of many interests. In addition to mountain bike racing on the Tour de Dirt circuit, he owns a wine-and-painting studio called The Paint Mill next door to Dérailleur and a catering business, which he’s planning to move into the shopping center. Mike Gray, the restaurant’s general manager, plans to open an ice cream parlor nearby, and Bean wants to open a bicycle shop, too.

“We’re trying to create a district here, like the ones in Oklahoma City,” he said.

To do that, Bean knew he needed something Yukon hadn’t seen before. After the closing of Hensley’s Top Shelf Grill, 1551 Garth Brooks Blvd., in October, the city hasn’t had an upscale restaurant to retain residents looking for a special dinner or draw in visitors from surrounding municipalities.

While Dérailleur is a coffee bar with cafe-style counter service during breakfast and lunch, Bean hired Ludivine alum Bryce Lack as his executive chef to create a dinner scene the likes of which the area hadn’t experienced before.

New menus are printed weekly, but the menu changes more often than that, Lack said.

“My style is peasant food,” he said. “There’s refinement with bold, but simple flavors.”

And like the field workers in Spain and Italy, Lack’s food is focused on what is fresh and local. He takes what Oklahoma has to offer and uses his kitchen training to create something exciting and new for diners.

There will always be certain proteins — fish, steak, chicken — available, but the flavors are always changing. While the petite filet might come whole one day, it could be served sliced and sauced the next, Lack said.

Gray said that’s why it is rare to find a menu online. He doesn’t want to disappoint a customer who comes in looking for one item after it has been removed and replaced.

A recent menu included crispy salmon with baby arugula, a braised chicken with cheese grits and a house-made pasta dish in a spicy corn broth.

Variations of those might return with the season, Lack said, but Dérailleur has shifted gears to its next menu.

Some restaurants are defined by a dish or by a chef, but Gray said Dérailleur is truly a team effort.

He came to the business after years of working with Bean. Lack’s creativity and skill in the kitchen are the drivers of the dinner menu, while Hilary Roper is constantly coming up with new ideas for sweet and savory breakfast pastries and desserts for lunch and dinner.

She said her productivity is pushed by demand.

“I’m always cooking something new because we sold everything else,” she said. “It’s so good, it doesn’t last.”

As fall approaches, she’s preparing to turn away from the fresh berries of summer and into more apples and stone fruit. Everything is seasonal. And when the fruits are gone, so are the desserts.

And that’s part of the draw.

“Every time a customer comes in, the experience should be different,” he said.

That’s not an easy feat, given the crowd of regulars visiting Dérailleur a few times each week, but Bean said they manage.

The bowling alley might be gone, but the restaurant is becoming the new place for Yukon to hang out, whether it’s teachers stopping by for coffee before classes start or music lovers who crowd the patio for live shows every week.

“We’re trying to create a place you can take the whole family out, get some good food and not totally break the bank,” Bean said.

It can be as laid-back or as upscale as the customer wants it to be, he said.

Part of that comes from the wine and beer menu, Bean said. His staff worked hard with wine representatives to create the best selection in town.

All of the beers served at Dérailleur, save Not Your Father’s Root Beer, are locally brewed.

That commitment to fresh and local is one reason Bean thinks the restaurant will stay small no matter how big the crowds get.

“I don’t see this as a franchise or a means to an end,” he said. “My goal in a few years is to see this area bursting at the seams.”

The field behind the shopping center could be used for outdoor concerts, food trucks and art festivals. Bean said Main Street can be great again.

He just wants to see Dérailleur packed every night, feeding Yukon residents seasonal fare they don’t have to drive 30 minutes or an hour away to enjoy.