Just before they opened their first restaurant in 2012, the owners of Hungry Town Concepts were quick to correct people who described their eatery as “just grilled cheese and beer.”

Oh, how time changes things. Today, the website for its runaway success, The Mule, touts its “Hot Melts & Cold Beer.”

John Harris, Joseph Morris and Cody Rowan mellowed as they watched their bar become the toast of the Plaza District. Of course it’s a grilled cheese restaurant. What a brilliant idea!

And now, with chef Beth Ann Lyon at the helm, they’re eager to talk about their newest unconventional venture. Of course it’s a corndog restaurant. What a brilliant idea!

Their hope is for Anchor Down, 30 NE Second St., to do for corndogs what The Mule did for grilled cheese sandwiches, which is elevate and perfect them.

Ask Lyon, a veteran of beloved Kitchen No. 324, about frying foods skewered with sticks and you will witness a woman possessed.

“Nothing is off limits,” she said. “We are exploring all kinds of different flavors and combinations as we put the menu together.”

Animated and energized, she is passionate about deep-frying batter-dipped sausages.

Whether it’s grinding and casing meats, creating a variety of batters or discussing options for sticks, her corndog enthusiasm would be contagious ... if everybody wasn’t already excited. 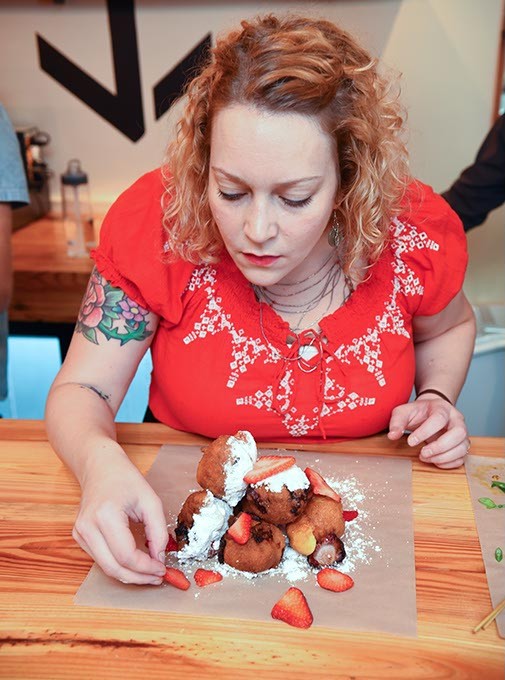 With more than 800 Facebook fans before it even opens its doors, Anchor Down has a built-in audience that seems to include just about everyone.

“We’ll have great meat dogs, of course, but we’re doing plenty for vegan and gluten-free folks,” Lyon said. “Our vegan dog is going to be a field roast with apple and sage.”

A corndog is a deceptively simple food: batter, filling, oil. But that means if any ingredient isn’t right, it’s obvious.

That’s why Lyon is working with Ralph’s Circle R Brand in Perkins to make a special, all-beef hotdog just for Anchor Down diners.

Add in a wild boar sausage using Oklahoma hogs, smoked cheddar cheese and a chicken dog with spring onions and owners believe their eatery offers something for everyone.

And if the dog doesn’t do it for you alone, Lyon said she’s working on some “crazy sauces” for dipping, like a signature maple whole grain mustard. It’s a kick of sweet and savory flavor that brings these monster corndogs to life.

The space — part of the shipping container chic development OK Sea — seats about 50 in a relaxed environment adorned with rich wood and trinkets from the briny deep.

Deep Deuce residents will provide a steady customer base, Lyon said, but like the Mule, it’s easy to see this place becoming a citywide destination. With the playful Hungry Town crew steering the ship, it’s a good bet the small, focused menu will be a hit. 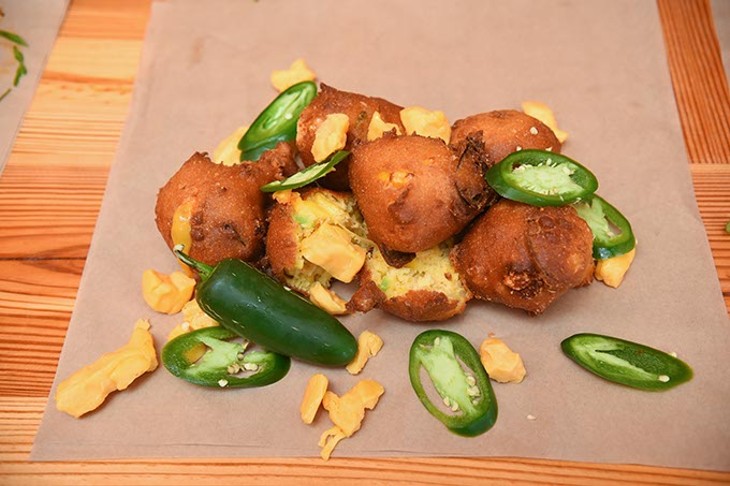 In addition to a seasonal corn chowder and corndogs, the compact kitchen turns out a fist-sized hushpuppy filled with slices of fresh jalapeños and cheese curds. Crispy outside, buttery and cakey inside, these appetizers pack a wallop of flavor.

Though they’re keeping the permanent menu slender, Lyon does have a lot of ideas for specials.

And for dessert, look for sweet corn balls filled with fresh fruit and dusted with powdered sugar. The moist fruit gives the interior a meltingly seductive texture that makes it a delightful after-meal treat.

The crew aboard Anchor Down hopes to open the restaurant within three to four weeks. For a definitive opening date, follow @AnchorDownOKC on Twitter.

Print headline: Dropping Anchor, This new eatery creates its own niche with its eclectic array of specialty corndogs. Yes, corndogs.