The pain and anguish Drew Tekell felt when moving home to central Oklahoma melted away over the weekend surrounded by friends and family during the soft opening of steakhouse St Mark’s Chop Room named after his late father.

St. Mark’s is located at 6462 Avondale Drive, next to his group’s other restaurant, En Croute, in Nichols Hills Plaza. Tekell and chef Jonathon Stranger aim to bring a high quality Wagyu beef at a reduced price and in a relaxed setting while honoring the memory of Mark Tekell, who died of cancer in 2016.

A vintage picture of Mark Tekell hangs just inside the entry of the intimate restaurant that features six tabletops, art deco tile, a marble bar and relaxed ambiance.

Mark was looking on and smiling down during the soft opening of the restaurant as Drew hosted his mother, uncle, brother and many of his father’s golf buddies from Belmar Golf Club in Norman.

“We all had a good chuckle when we realized this would be the exact kind of place my dad would like to go to,” Drew Tekell said of the soft opening. “We had a blast; everyone texted the next day to say it was awesome.

Drew Tekell grew up in Norman but went to high school at Casady School in Oklahoma City when he met Stranger, in school at Bishop McGuinness Catholic High School, through mutual friends.

After Tekell left Oklahoma for culinary school in Arizona, he had jobs in the restaurant industry in Hawaii, Colorado, Las Vegas and Seattle, where he spent nearly a decade before coming home to be with his dad before he passed away.

Tekell reconnected with Stranger around the same time Stranger was leaving Ludivine and The R&J Lounge and Supper Club to join En Croute and its ownership group. Tekell was brought on at En Croute as sommelier and consultant before being offered partnership.

This spring, the owner of Luxe Objects jewelry store next to En Croute wanted to downsize, and Stranger and Tekell jumped at the chance to expand. As they batted around ideas for a concept, they kept coming back to the memory of Mark Tekell, who was an anesthesiologist and avid golfer.

“This is what I, and us as restaurant family, could do to honor my dad’s memory and legacy,” Tekell said. “He was a big fan of the country club, and without being a country club, we wanted to have some of those elements: the comfortable chairs and the feeling of when you walk in, you know everybody.”

Both Tekell and Stranger repeated the idea that St. Mark’s is a different kind of steakhouse. It’s one where you can come in wearing a T-shirt and shorts to order a steak and watch an Oklahoma City Thunder game. They want to promote a relaxed atmosphere akin to a neighborhood bar, where getting a good steak doesn’t have to be a $100 per-person luxury.

“I’ve opened a lot of restaurants, and they all come with a certain level of nerves and pressure, but this one is different,” Stranger said. “There is an added pressure knowing his family will be here, but it’s one I’m grateful to carry. For a restaurant to be unique, it has to have personality and meaning outside  trying to make money.

“[The] Cheesecake Factory does a great job, and they make people happy while making money, but this is something more special for the neighborhood, for people we grew up with.  If you love what you’re doing and stick to that mission, it will work.” 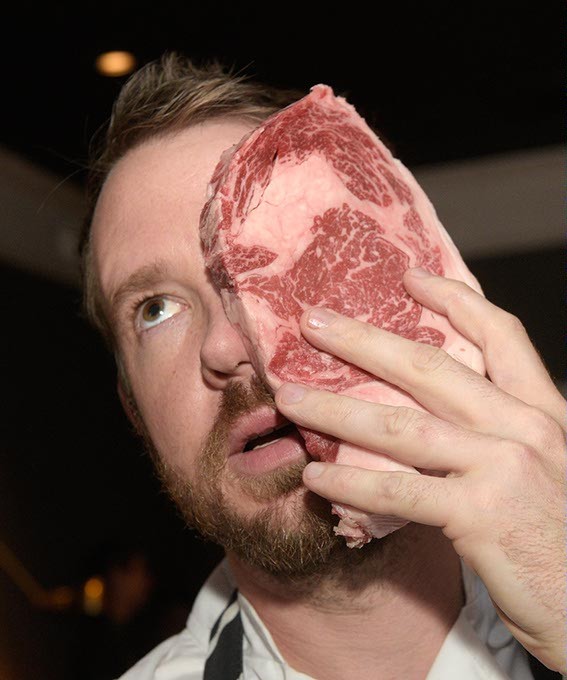 The star of the St. Mark’s menu is the Wagyu beef raised at Ironhorse Ranch by Ted Davis in Macomb.

Stranger said Davis got some of the first black Wagyu sold to the United States over 30 years ago. Wagyu is similar to the famed Kobe beef also from Japan because of its predisposition to higher levels of marbling, but Kobe is only cattle raised in a certain region in Japan. The Wagyu at St. Mark’s has been raised in Oklahoma but only made available stateside in recent years.

While opening St. Mark’s, Stranger sent a photo of the Wagyu to a friend opening a steakhouse in Tribeca, who responded in disbelief at the quality of beef.

“We may not have Manhattan, beaches and mountains, but we have this beef,” Stranger said.

He relied on a relationship dating back five years with Davis to get access to Wagyu without the use of a distributor. St. Mark’s passes the savings to the customer.

“It is because there is no middle man and it is local,” Stranger said.

St. Mark’s offers tenderloin, rib-eye and strip steaks, with a rotating chef’s special that opens with a sirloin flap cut. He already has six grass-fed bone-in rib-eyes dry-aging that won’t even be pulled out until the winter holidays.

The appetizers include house and Caesar salads, potato dauphinoise with caviar, bone marrow persillade, roasted half Maine lobster and a smoked short rib, which is served with an eggplant mole.

“I’ve always wanted to do the short rib at a restaurant, but I’ve never had an application before,” Stranger said. “It’s a big umami bomb.”

St. Mark’s shares a kitchen with En Croute, which was expanded during the renovation to give more room to En Croute’s pastry chefs. Customers can order St. Mark’s menu from En Croute, but not vice versa.

“The soft open was a pressure test because all of the tickets went back the same time En Croute filled up for dinner,” Tekell said. “The good thing is that the kitchen got as busy as it’s ever going to get.”

St. Mark’s is open 5 p.m. until at least 11 p.m. Tuesday through Saturday but can stay open until 2 a.m. if customer demand allows. Visit stmarkschoproom.com