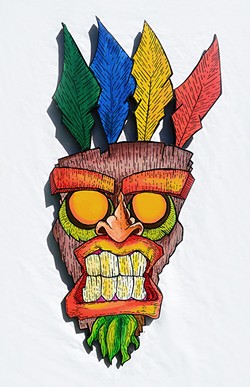 Stacy Dunn made a Facebook event page for her video game-themed art show Oklahoma ARTcade one night and went to sleep not too long after. When she woke up the next day, she saw more than 2,000 people had indicated that they were interested in attending.

Dunn, who is organizing her first art show anywhere near this magnitude, immediately shared the event’s surprising popularity on the organizing group chat.

“I sent them a screenshot and said, ‘Guys, what have we gotten ourselves into?’” she said.

Oklahoma ARTcade: A Video Game Gallery Showing runs 7-11 p.m. Friday on the second floor of The Paramount OKC, 701 W. Sheridan Ave. The event, which features around 100 individual pieces by about 35 artists depicting scenes and characters from game series like The Legend of Zelda and Mario, is free for all ages with a bar and bistro available to those 21 and older. Guests are additionally asked to leave a donation for Hotdogs for the Homeless, the show’s partnering charity.

Local rock band The So Help Me’s, partially inspired by Nghiem and Allen’s work, held a Speakeasy art show and concert based on the work of director Tim Burton on Oct. 28.

Dunn said Oklahoma ARTcade is the latest addition to a second generation of local art shows directly inspired by earlier events by Nghiem and Allen.

There is some natural overlap between art and video games. The fantasy worlds one can conjure on a home gaming console or computer are often highly visual and immersive, so it is natural that a creative spark could come from them.

“I think there’s a lot of [artists] that get inspired from video games and vice versa,” Dunn said “Being an artist my whole life, there would be things I’d see in games and I’d say, ‘Oh, I want to paint that or I want to paint something like that.’ Or it’d give me an idea for a character to make up of my own.”

Before Super! BitCon, one of Oklahoma’s largest annual modern and classic gaming conventions, announced earlier this year that it would be ceasing its yearly event usually held at State Fair Park to regroup and refocus on the future, Dunn had been one of the art vendors at the show.

Oklahoma ARTcade, she said, was largely inspired by her vending experience at BitCon. The convention’s social media page has been promoting the show. Dunn said Oklahoma ARTcade is also sponsored by Oklahoma Retro Gamers Society.

Though there is an emphasis on classic games, the show includes works from a wide swath of video gaming culture.

“The criteria was that it had to be an original piece of art,” Dunn said. “It couldn’t be like a print or something that was easily reproduced.”

Dunn has a degree in fine arts from Oklahoma City Community College and was responsible for organizing the end-of-year art show for her portfolio class while in college. But other than that and her experience with BitCon, she is new to the role of art show organizer.

Regardless, she said things have been going fairly smooth so far. The hardest part has been keeping pace with the event’s many moving parts.

“I feel like a teacher sometimes, like, ‘It was written in the syllabus!’ because I get the same questions over and over again and I wrote everything out ahead of time.” Dunn said. “But it’s awesome that I could get this many people together with a common interest. But it’s also kind of overwhelming because I don’t know many of them.”

Dunn said the first piece of video game-related art she ever did — a painting of Mario’s bipedal dinosaur-resembling character Yoshi “pooping out” an egg — sold almost instantly online. This inspired her to continue her video game-themed work before eventually getting a booth at Super! BitCon and deciding to organize Oklahoma ARTcade.

She said her most sold works at BitCon were usually from The Legend of Zelda, Mega Man, EarthBound and Pokémon.

Art and drawing in general is something Dunn has been interested in for as long as she can remember.

“My parents have all these stories about how they would just give me a crayon and a piece of paper so I would shut up,” she said. “It was so easy.”

Dunn remembers one story from when she drew a picture of a cat for her father when she was 3 or 4 years old.

“My mom said it was so good that whenever my dad said I did it, she thought he was playing a prank and that he did it,” she said. “He was like, ‘No, really. She drew that.’”

It is not yet certain whether Oklahoma ARTcade is a one-off event or something that could morph into an annual tradition. Dunn said the event’s future is dependent on how well the first year goes but she would be open to organizing something like it again.

This year, she said, has been a learning experience that involved meeting many new people.

“It’s so different when you work with a lot of people you don’t know,” she said. “It’s like that group project in school — ‘Am I doing enough? Am I doing too much?’”

Dunn said her primary goal with Oklahoma ARTcade was to make a free event in the city where people with similar interests could gather and have fun. If that happens — no matter how many people attend or how much art is sold — she said the event will be a success.

“The thing I wanted to do the most — I said to myself, ‘There’s nothing to do in Oklahoma,’” she said. “So I wanted to make something to do. I hope that’s something everyone can go to and enjoy.”

Print headline: Experience points, A new video game art show gains a large following ahead of its debut at The Paramount OKC.