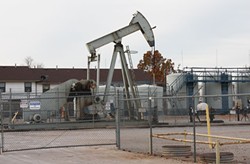 It was only a year ago that Oklahoma voters rejected a proposal to raise the state’s sales and use tax by 1 percent to support a $5,000 teacher pay raise and investments in public education. Now, a separate group — with its founders tied to the oil and gas industry — wants to build a teacher pay raise through a 7 percent gross production ballot initiative.

Next month, Restore Oklahoma Now, Inc. will file a ballot initiative calling on Oklahoma voters to raise the incentive rate for gross production tax from 2 to 7 percent with the additional revenue directed toward education funding to bring a pay raise to the state’s public school teachers. The coalition’s leadership is confident its proposal will find favor with Oklahomans who have expressed frustration after lawmakers repeated reneged on promises to give teachers a raise.

“It’s about saving public education in Oklahoma and paying our teachers a living wage,” Mickey Thompson, executive director of Restore Oklahoma Now, Inc., told Oklahoma Gazette. “We need more teachers. We need qualified teachers, and we need to pay them at least at the regional average. If we are going to have a state that is worth living in, we are going to have to improve our public education system. That starts with paying teachers a living wage.”

The juxtaposition of the oil and natural gas industry — one of the state’s largest industries — and teachers might seem strange. In the context of recent legislative sessions where Oklahoma lawmakers have stared down budget deficits as large as $1.3 billion in 2016 and nearly $900 million last May, the oil and gas industry, or more specifically its success in lobbying for a horizontal drilling tax rate at 2 percent, has been viewed as a contributing factor to Oklahoma’s revenue problems. With the Sooner State short on cash, lawmakers have passed along deep cuts to core services, including state aid allocations relied on by a majority of Oklahoma schools for covering the cost of day-to-day operations. It was more than a decade ago that teachers received a pay raise. Despite many legislative attempts to pass a teacher pay bill at the Capitol, many educators have fled for better-paying teaching positions in neighboring states or left the profession altogether.

With pressure mounting for lawmakers to find a solution to all of Oklahoma’s budget problems, raising the state’s gross production tax has become part of the conversation. It’s a policy position not unique to Restore Oklahoma Now, which is a new coalition with ties to vertical-well drillers with hopes to grow in membership. The group also argues that repealing all the current tiers of gross production tax is fair. Currently, under Oklahoma law, the vertical-drilling operators pay a 7 percent tax rate while larger companies that horizontally drill pay a 2 percent tax rate.

This spring, newly created Oklahoma Energy Producers Alliance (OEPA) gathered in the grand staircase inside the Capitol and called on lawmakers to restore the gross production tax to 7 percent.

“We think it’s a matter of fairness to Oklahomans that all oil and natural gas production be taxed at a flat and competitive — with other states — rate that helps sustain essential state services, especially addressing our teacher crisis and teacher pay,” Mike Cantrell, chairman of OEPA, which was formed by longtime operators of vertical wells, stated in a press release announcing Restore Oklahoma Now.

“We will organize and put up a very strong answer to the question,” said Tim Wigley, OIPA president. “They will likely see themselves teamed up — for funding purposes — with groups that don’t like big oil, small oil or any oil. We will answer the call and be ready for them.”

Public debate on the question could center on whether the state benefits from raising the gross production tax or when more drilling and more wells come online. Wigley contends “rigs up in the air” drives the economy.

“Our membership is comprised of average employment around 11 or 12 employees,” Wigley said. “They are small business owners. Raising taxes creates uncertainty. I’ve got my chairman of the board who just signed paperwork to start his third company with a whole lot of private equity funding, and he is not going to drill in Oklahoma. You wanna know why? There is too much uncertainty about taxation. A lot of our members explore and produce oil and natural gas in multiple states. They have a choice. While the rock is good in Oklahoma, it’s not the best rock in the country.”

There is no denying Oklahoma’s got the oil and natural gas resources desired by drillers. Arnella Karges, executive vice president of OKOGA, explained the organization’s top five members poured in $5.5 billion for new oil and gas exploration in the Sooner State in 2017.

The current gross production tax at 2 percent for the first 36 months of production keeps drilling dollars in Oklahoma when so many of OKOGA’s members have acreage in nearby oil and natural gas producing states, Karges said.

“That initial drilling rate of 2 percent for the first 36 months is what encourages exploration and production in Oklahoma,” Karges said. “We are lucky with technology and having great fields. We are experiencing production, but exploration is an expensive part.”

Historically, Oklahoma placed a 7-percent tax on drilling. The addition of incentives for oil and gas production, including low tax rates when a well is at its most productive time, must stop, Thompson argued.

“It is important to note that no one likes taxes, but taxes are necessary to fund the essential elements of our government,” Thompson said. “We just feel like the gross production tax — that special tax of 2 percent — is not adequate. It is certainly much lower than all the oil-producing states. We can argue and we will argue how much lower, it is significantly lower. We think that is a reasonable solution to a crisis situation.”

Print headline: Oil and education; A newly created coalition is drafting language for a state ballot initiative that would raise the state gross production tax to fund a teacher pay raise.

Update, Nov. 29: Oklahoma Gazette incorrectly stated that the top five members of the Oklahoma Oil and Gas Association poured in $5.5 million for new oil and gas exploration in the state in 2017. The members poured in $5.5 billion in capital investment in Oklahoma in 2017.