A Pulitzer Prizewinning author makes two stops in the metro 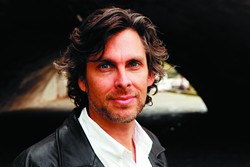 Pulitzer Prize-winning author Michael Chabon speaks at two public events in Oklahoma Thursday. Chabon — he likes to say it rhymes with radon — is here in support of The Big Read, a program of The National Endowment for the Arts. He will sign books and answer audience questions at both events.

Chabon won the Pulitzer Prize in 2001 for his novel The Amazing Adventures of Kavalier & Clay. He is also the recipient of the Hugo Award and Nebula Award in 2008 for his novel The Yiddish Policeman’s Union, an alternative history that tells of a world in which European Jews were settled in Alaska during WWII.

Each year, The Big Read assigns a book to be read as part of its ongoing efforts to return reading to the center of American life. This year, the book is Ursula K. LeGuin’s A Wizard of Earthsea, an influential fantasy novel. LeGuin, now 85, pioneered the fantasy genre and is one of the first successful female novelists in it, but Chabon told Gazette that she transcends the genre.

“She is a truly fine writer, and like many genre fiction writers, she doesn’t get as much recognition outside the genre as she deserves,” Chabon said. “She doesn’t just write genre fiction; she is writing literature.”

Like many writers who have worked in the realms of fantasy, sci-fi and alternate history, Chabon grew up reading Edgar Rice Burroughs, a writer he called the “inventor of the planetary romance genre.” Burroughs was a British writer best known for his Tarzan series, but fans were also enamored with his books about Mars, Venus, the moon and Pellucidar (earth’s hollow core).

“Burroughs created the main trope in the genre,” Chabon said, “that of the rugged adventurer who conquered alien worlds by sword, might and superior intellect. LeGuin’s Earthsea offers a critique of this trope, and she’s actually doing it as early as her first novel, Rocannon’s World.”

LeGuin’s father, Alfred L. Kroeber, was a pioneering anthropologist, one of the greatest of the 20th century, and his daughter would adopt not only his pioneering spirit but his love of anthropology, ethnology and linguistics to create richly imagined worlds. Rather than the savages of Burroughs’ style of conquistador fantasy, LeGuin’s characters are complex and three-dimensional, with complicated mythologies and backstories.

“Her father’s influence is there in her writing,” Chabon said. “She brings the perspective to bear when she describes the composition of alien atmospheres or wonders what a planet with two stars would be like from the perspective of science. She examines worlds from scientific and anthropological perspectives.”

Being an award-winning female writer was important, too. In our post-Narnian, post-Harry Potter world, it is hard to imagine the genres of fantasy and magic as being hostile to women, but the overtly sexualized art and sexist storylines of most of the 20th century made it difficult for women to enter as fans or writers.

Chabon will make public appearances in Shawnee and Norman on Thursday. He will also attend at a private reception to benefit Pioneer Library System and PLS Foundation on Wednesday, March 25.

Free and open to the public

Register for both at pioneerlibrarysystem.org.