As its name implies, The Flea was intended to be a watering hole mixed with a flea market, a place patrons could stop in for a drink and leave with a painting or a piece of jewelry.

That’s not quite how things worked out, said general manager Samantha Morphew.

“It was built off the idea of a bar where you could buy stuff off the walls,” she said. “They veered away from that because people kept bringing in more sentimental things.”

“The one up there, somebody brought in their grandmother’s vacuum,” Morphew said. “That’s the idea we’re going for.”

The name on the building is new, but plenty of drinks have been poured there over the years. Locals might remember it as So Fine Eatery & Pub, which closed last year after owner Larry Jenkins sold it.

Before that, it was The Neighborhood Lounge. The 86-year-old structure needed a lot of love and repairs. Jenkins said he invested more than $300,000 to renovate the space and draw in a younger crowd.

Just a couple months after Jenkins sold the property to developer David Box, The Flea announced its intention to move in.

Despite the massive improvements put in by the previous owner, it’s still a dive bar at heart, said managing officer Grady Wisdom, who started The Flea in Springfield. The building’s history is an important factor in why Wisdom chose the Oklahoma City venue for The Flea’s second location.

“I’m all about repurposing stuff,” he said. “Our trash-to-treasure idea gives us the ability to be whatever we want.”

Repurposing an old dive bar into a new dive bar appealed to him.

The back bar is made from pallet wood Wisdom brought in from Springfield, and the bar top comes from an old bowling alley called Holiday Lanes. 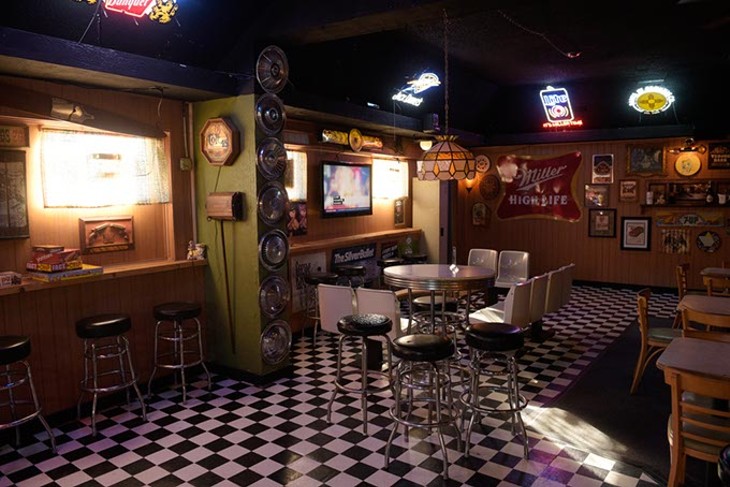 Though his bars share a name and an aesthetic, Wisdom told his Oklahoma City staff that their Flea will adapt to best serve their customers.

“Talking about how the original location evolved is exactly the point,” he said.

When the bar opened in 2012, organizers did want to sell items off the walls. But as customers brought in cherished items that had once hung in another bar or in their grandfather’s basement, it became more of a collection.

“I’m never going to sell something a customer donates to us for the bar,” Wisdom said. “The bar is ever-evolving.”

Morphew said that since the October opening, Oklahoma City’s Flea has earned its own “let loose” attitude.

“The vibe is kind of a hole-in-the-wall dive bar,” she said. “Come as you are. Do as you want. Get as loud as you want.”

“Everyone closes their eyes and throws ice to choose the shot they have to take,” Morphew said.

It’s an eclectic group, much like the decor, she said. The Flea is as welcoming to college students and service industry workers as it is to attorneys and employees from the nearby Bob Moore corporate offices.

“It’s a little bit of everything,” Morphew said.

She hopes to see the clientele expands even more after the bar brings food online in the next few weeks. The menu will feature fare like hot wings, hamburgers and Frito chili pie.

Like the food menu, the beer menu is a throwback. Morphew loves craft beer and gets a few taps to play around with local brews, but most of the beers — including Hamm’s, Genesee, Pearl and Old Style — come from a different era.

Wisdom said the classic brews are favorites with customers who are rediscovering the joy of neighborhood bars. His vision for The Flea is cozy and welcoming.

The venue’s space is inviting, which is one of the many reasons The Flea is now located in Oklahoma City.

“It’s one of the oldest buildings in downtown,” he said. “We were just waiting for the perfect opportunity.”

And he said it didn’t hurt that business partner Brad Hitchings previously had success importing Skinny Slim’s from Springfield to Oklahoma City and Edmond.

Wisdom said The Flea reclaims the term “dive” and fashions it into something less scary and more fun.

“It’s only recently that the word has gotten a positive connotation,” he said.

Instead of being dangerous, many dives are now comfortable and friendly places where guests can be themselves.

Morphew said the atmosphere is perfect for karaoke, which the bar hosts on Tuesdays, and its Thursday night trivia games. The venue’s also getting more spacious; she said its patio will expand over the next few weeks.

Even with more room, Wisdom said The Flea still feels personal. It should feel even more personal as regulars fill in the nooks and crannies with items that make them feel at home.

Print headline: Get bit, Springfield, Missouri, import The Flea finds its own identity in Oklahoma City.