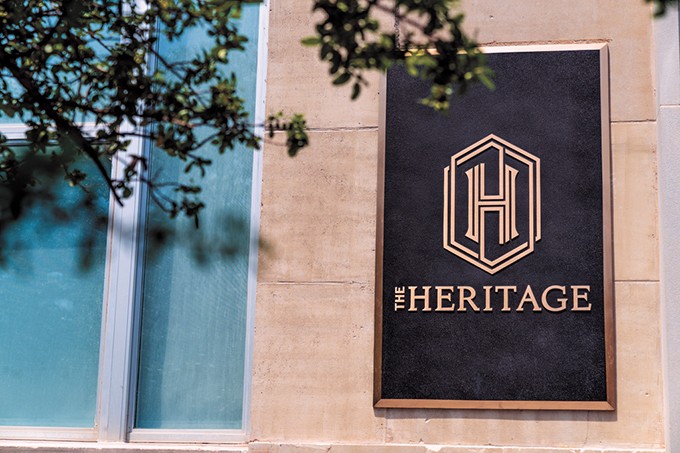 Discussion centered on redeveloping a portion of the building at 621 N. Robinson Ave. to house a planned memorial museum. Two-thirds of the building went unspoken for and sat vacant for years. Meanwhile, Oklahoma City National Memorial & Museum welcomed thousands to pay their respects.

Eight years ago, Bond Payne, founder of Heritage Trust Company, found himself inside the building. Designed in 1923 as a Masonic Lodge by architect Solomon Layton, who is known for the Oklahoma State Capitol and Skirvin Hilton Hotel, the classic revival-style building was added to the National Register of Historic Places in 1980. It was home to the Journal Record newspaper until the 1995 bombing when a city trust bought the property. While the city poured dollars into its preservation, it would take great effort to redevelop the historic building for any type of use. The building, a symbol of the city’s perseverance and hope, intrigued Payne.

“I couldn’t get it out of my mind,” Payne said when recalling his initial interest in the building during an interview with Oklahoma Gazette. “I felt like it might be the perfect place for us to move our company downtown. It was such a special building, such a special place, and it was important to Oklahoma and Oklahoma City. Our business is a multigenerational business that is connected to Oklahoma. We are a multigenerational Oklahoma family. This was an opportunity for us to demonstrate our commitment to Oklahoma City.”

Payne acquired the building from the city’s trust for $7.25 million in 2014, which kicked off the redevelopment. Payne sought a Class A alternative office space with an “artful balance of modern design and amenities enveloped by its familiar, classic architecture.” The result is The Heritage, which provides vibrant, modern elegance while maintaining the integrity and soul of the property.

Unveiled in 2017, The Heritage is now home to Heritage Trust Company, Eide Bailly LLP and Saxum.

“It is always fun to work on a project that exceeds your expectations,” Payne said.

Long before Payne’s vision came to fruition, it caught the attention of C. Renzi Stone, Saxum’s founder and CEO. Like Payne, Stone took hold of the concept of ensuring the future of a near-century-old building with deep ties to Oklahoma City history while also creating a space that matched the creative energy of clients and staff.

“I wanted a space that was formal and informal, modern and traditional, loud and quiet, public and private — creative,” Stone said. “I wanted something that allowed people to be who they are.”

Saxum views itself as an integrated marketing and communication agency focused on public relations, digital and advertising. The company dates back to July 2003, when Stone walked away from a public affairs and public relations firm in Washington, D.C., to break out on his own. Mick Cornett, an OKC councilman, hired Stone to assist in his campaign for mayor in 2004. Cornett won the election; Stone received a phone call from Dell, Inc., who had their sights on Oklahoma City. The clients continued to arrive.

For its sixth office move in 15 years, Stone was after a space to take the company into the future. Inspired by offices he experienced during a business trip to New York City, Stone wrote out his own vision for the fifth and sixth floors of The Heritage. The sixth floor was an addition to the historic structure.

In December, Saxum and its 55 employees moved into the new space, which offers 22 meeting areas complete with sleek and sophisticated aesthetic, superior technology and postcard views of Oklahoma City’s downtown. On the building’s fifth floor, which Stone affectionately refers to as the heart of the company, is the shared employee workstations as well as small conference rooms. One-person soundproof rooms provide peace and quiet for employees. On the sixth floor, light wells help illuminate the fifth floor, the former attic. Each light well is inscribed with a word that matches Saxum’s characteristics: bold, lively, original and driven.

On the fifth floor is a window view of the Survivor Tree and the memorial.

“I believe it is the most creative space in Oklahoma,” Stone said as he walked through his company’s headquarters with Oklahoma Gazette. “I think it is a model of how creative people and millennials work. It gives people options for how they work and when they work. … We feel like it is a real game-changer in terms of the company and where we hope to be in the future.” 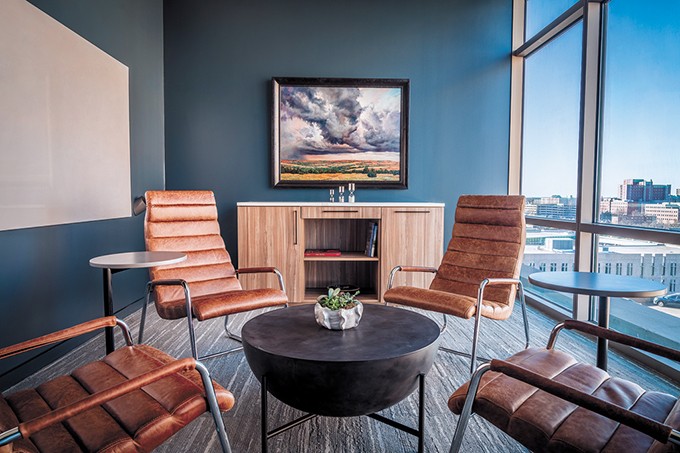 Heritage Trust will celebrate its first anniversary in The Heritage in May. Payne said the feeling of newness hasn’t worn off, as staff continues to bring family and friends by for tours.

“This isn’t just people like me,” Payne said. “It’s people like Renzi and Eide Bailly who captured the vision and went with it when it was really hard to see. It took vision to capture what we were trying to do.”

Many have speculated why the building sat mostly empty for so long. The building’s proximity to the Murrah Federal Building is one reason. Years ago, redevelopment seemed unlikely, given the emotions tied to the site.

Time heals, and downtown Oklahoma City is a very different place in 2018 than it was in 1995. The Heritage is part of Oklahoma City’s renaissance story, Stone said.