A third time's a charm for Museum franchise 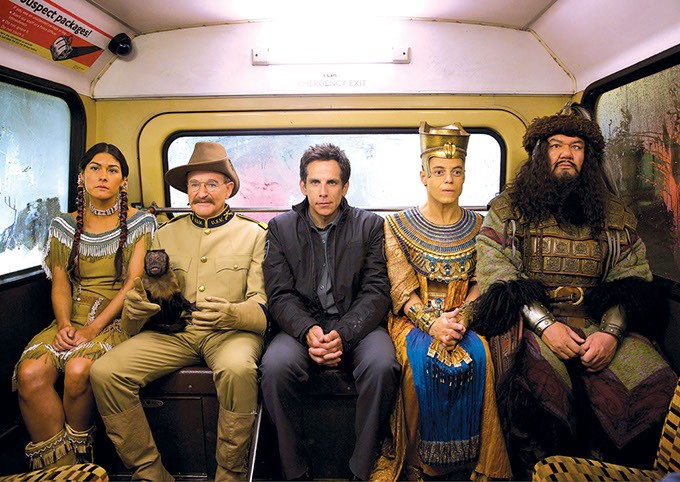 The Night at the Museum franchise is a heck of a lot of fun, and the final chapter comports itself well in that department. The series’ imaginative pretense, combined with great visuals, make it a fun addition to the holiday lineup. Kids will especially enjoy the sillier gags, while adults aren’t left squirming for the credits. That said, the experience isn’t a unique one.

In Night at the Museum: Secret of the Tomb, the familiar cast — Attila the Hun, Sacajawea, Teddy Roosevelt, tiny Octavius and Jedediah and, of course, Dexter the capuchin monkey — is present and accounted for.

There’s a new addition to the team in the form of Laaa, a Neanderthal who, thanks to the exhibit makers at the museum, uncannily resembles Larry (Ben Stiller), whom Laaa calls dad.

On the night of the annual Night at the Museum fundraiser, things go awry with what the public believes is special effects. In truth, something has gone wrong with the magic at the museum. To save it, Larry must travel to London to save the magic or lose it forever.

The cast is delightful, with new characters including Rebel Wilson (Pitch Perfect) as Tilly, the British Museum’s night guard who harbors some fanciful ideas of what night guards must be like in America.

He grows tiresome in about ten minutes, but, as the characters point out, he did just wake up for the first time.

The absolute best cameo is worth not spoiling, but here’s a hint: It involves one of the Uncanny X-Men and results in one of the best jokes in the movie.

The action moves along at a rapid pace to keep up the suspense. The gags are funny, and some of the humor is sophisticated enough to elicit a laugh from only adults.

The film falls short with the emotional element. Although it is supposedly the finale of the trilogy, the movie tries a little too hard to jerk at the heartstrings of the audience. In most cases, it misses the mark.

Young ones might be affected — not in any traumatic way — but the adults in the audience might feel a tad manipulated.

There are points of high drama. There are also several particularly funny scenes, but nothing that hits the point of hilarity that most of the actors are capable of.

Stiller seems particularly subdued, especially since we know he is capable of brilliant performances (like last year’s breathtaking The Secret Life of Walter Mitty). He leaves us wanting so much more.

It feels like he’s phoning it in while Dexter the monkey steals many of the scenes, although he has been doing that since the first film.

For adults in the audience, the poignancy of the film comes from a surprising and unintentional place. The film features both Mickey Rooney and Robin Williams, and seeing them on the big screen has a powerful emotional effect.

This is especially true with Williams. His eyes seem haunted and sad through most of the story; they seem to have lost the spark that was once there. The scenes calculated to evoke the right emotions only work because of the actor’s death.

In one of the high points of the film, Dick Van Dyke is ageless and buoyant — and, boy, does he still have it.

His screen time is all too brief, but it tempers the loss of the other two actors. Overall, the movie is typical holiday fodder, a lot like popcorn — filling but not particularly nourishing.

Print headline: Monkeying around; The final chapter of the Night at the Museum franchise is cute, funny and unintentionally poignant.