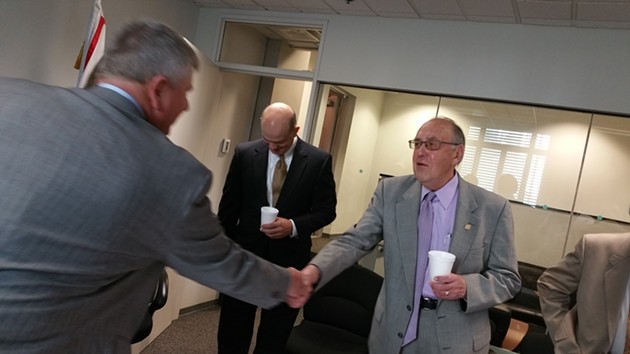 “Your paper once called me a ‘grumpy old man,’” Councilman Pat Ryan said the to the Oklahoma Gazette reporter in his office before a long pause. “That’s the only thing you’ve ever got right about me.”

Ryan, a 10-year member of the Oklahoma City council, often came across as a man with rough edges, but he never shied from sharing his opinion or calling another counselor to task on an issue he disagreed with. This month, he begins his retirement from public service, leaving behind a reputation as a stalwart politician that, while sometimes exhausting, gained respect from his colleagues.

Ryan wasn’t one to jump into a policy fight without first arming himself.

“He studied that [council] agenda each Sunday, highlighting things and taking notes,” said Grace Ryan, Pat’s wife of 56 years. “He asks really strong questions, but when you talk to him and find out what his reasoning was and how much research he did, [you discovered] it was good that he asked those questions.”

Ryan was elected in 2005 as councilman for Ward 8, the city’s northeast ward that has developed a reputation for being one of the more civically engaged voter blocs. A former vice chairman for Oklahoma Gas and Electric, Ryan was also an owner of Proflight Aviation Services for two years and CEO of Laser Eye Network, Inc.

Ryan said 10 years was a long enough tenure, but he always tried to make sure every citizen had access to answers about their city.

“I think [the thing I’m most proud of] was ensuring that our processes work and our citizens weren’t being ground up by the machinery of the city,” Ryan said.

A reception for Ryan was held prior to Tuesday’s council meeting, followed by recognition from the mayor to start the meeting. Ryan announced last year he would not seek reelection when his term ended and a March election saw Mark Stonecipher elected as the next Ward 8 representative.

“He really believes that all of the council should have as much integrity as they can,” Grace said. “The voting turnout is so low, yet the city council has the closest impact to the citizens, so it’s really important for people to vote. He really took his job on the council seriously.”