“I really didn’t understand it,” Bailey said, “but I was just intrigued with how he said it, the passion behind his words.”

Bailey, a Tulsa native, was introduced to the speech and King through a competition challenging local students to recite the speech from memory. Though Bailey didn’t enter that year, he did enter in eighth grade and placed third. He returned to the competition as a sophomore in high school and won the first-place prize: a college scholarship.

“It wasn’t until my 10th-grade year that I had a good grasp of what Dr. King was really saying in that speech,” Bailey said, “and I’ve had a passion for his speeches and sermons ever since.”

A talk with his mother gave him the context that made the difference.

“She said, ‘You know it by memory, but you have to get it from memory to heart,’” Bailey said. “So she sat down with me, I can recall, and shared some videos and stories that transpired during those times and just made me aware of what it was that Dr. King was really saying, how it was relevant to some of the situations and occurrences that were happening. And it wasn’t until she did that that I was able to piece together the passion that I was once intrigued by.”

Bailey, now a public speaker reciting many of King’s speeches as well as delivering his own at events across the country, is currently planning a 50-year retrospective and commemoration to mark the anniversary of King’s death in April.

“This speech, I think, is more relevant today than it was when Dr. King delivered it over 50 years ago,” Bailey said. “And I’m really saying that because in those days, racism and discrimination were the status quo. There was no one trying to hide their racism because they didn’t have to hide it. But when you look at today’s times, most racism is covert racism. It’s done under the table. It’s prejudice and discrimination that happens when nobody can see it. It’s systemic. It’s done by leaving minorities and African-Americans out of places of power.”

But Bailey said he has sometimes questioned the impact King has on society today and whether continuing to deliver his speeches to modern audiences has any effect. 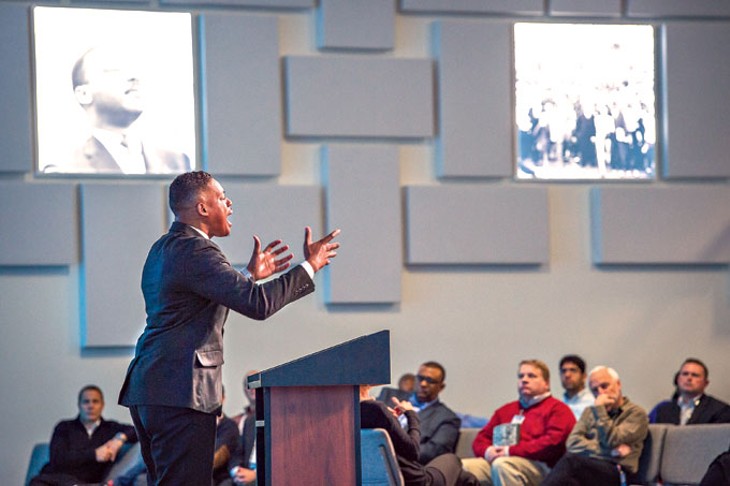 “I got to a point not long ago that I was just kind of like, ‘What’s the purpose?’” Bailey said. “‘I’ve been doing this for so long.’ I mean, you see so much that happens; you see our country is still divided. … I was just saying to myself, ‘What is the point of still doing this? Nobody is getting it. They weren’t getting it 50 years ago; they haven’t got it in the 50 years since he said it, and they’re not getting it now.’ … There’s been times when I started saying the speech and people have walked out. People have rolled their eyes. People have come up to me after and told me, ‘You don’t know what you’re talking about. Why are you doing that speech? It’s not relevant anymore.’ And I have to think, ‘Really? Given all that is happening in today’s times?’”

“Some people will take bits and pieces of Dr. King’s speech and they twist it,” Bailey said. “They twist the meaning of it. … And I’m saying to myself in my head, ‘If you were to read the speech, you could really get the context of what Dr. King was really saying, and it wasn’t that. It wasn’t what you’re trying to make him say.’ … We have to have his words. We have to have his message and still recite it throughout society today because, I think, for the most part, we’re still looking for a leader. … I’m still looking to Dr. King like my parents were.”

In the Oklahoma City metro, several events are scheduled to commemorate King’s legacy on Monday. The 21st annual Midwest City Prayer Breakfast begins at 7 a.m. at the Sheraton Hotel at the Reed Conference Center. At 9 a.m., a silent march honoring the legacy of similar marches that took place during the civil rights movement will begin at Freedom Center on Martin Luther King Avenue and proceed to Oklahoma History Center for a ceremonial ringing of a replica of the Liberty Bell. A holiday program featuring musical performances, guest speakers and a benediction will begin at 12:15 p.m. and continue until 2 p.m., at the start of the parade featuring floats designed to convey this year’s theme, The Power of One.